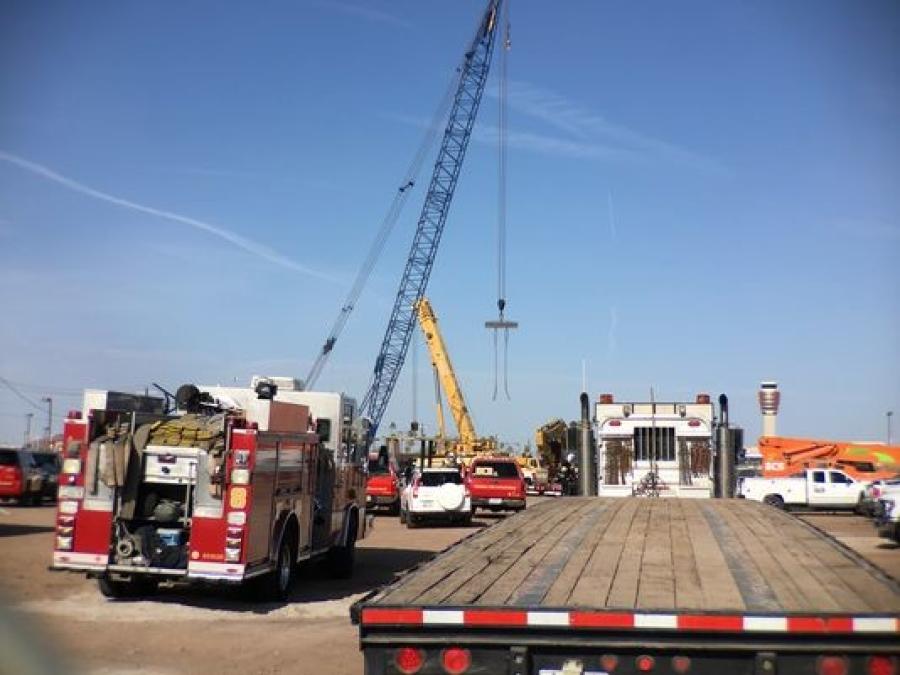 Capt. Jake Van Hook with the Phoenix Fire Department said one of the workers had been unaccounted for since the rig toppled at 9:30 a.m. (Nathan J. Fish/The Republic photo)

A search continues for a missing construction worker after a drilling rig toppled onto its side at a construction site at the Phoenix Sky Harbor International Airport.

Officials were still attempting to clear the collapsed equipment late May 21, 2018, and ceased operations around 11:45 p.m. due to safety concerns, azcentral.com reported.

Despite removing some of the rig's heavy components, construction crews were unable to move the downed drill rig; the Phoenix Fire Department plans to bring in a larger crane to lift the toppled drill rig.

The incident occurred just south of Sky Harbor Boulevard, near the West Economy parking lot and west of Terminals 3 and 4. The site was on Sky Harbor property, as construction is being done for the PHX Sky Train, azcentral.com reported.

Capt. Jake Van Hook with the Phoenix Fire Department said one of the workers had been unaccounted for since the rig toppled at 9:30 a.m. He is believed to be the operator of the rig, he said.

Van Hook said officials have reason to believe that the missing construction worker was trapped in a hole being blocked by the heavy machinery. The worker's condition was unknown.

Van Hook added that because of the complicated nature of the incident and specialized resources needed to move the toppled equipment, access to the recently excavated hole could take an extended amount of time.

Earlier in the day, crews had attempted to reposition and upright the rig but had not been successful going into the evening hours. That prompted crews to take a new approach by Monday evening that involved removing the track of the machine to lighten the load, Van Hook said.

One of the tracks was successfully removed at around 9:45 p.m., Van Hook said.

The next step was to reposition the equipment to continue to try to remove the downed rig, he said.

The accident happened where construction on an extension of the Phoenix Sky Train is taking place.

Sky Harbor operations were not affected by the incident but power lines around the area were knocked down, Van Hook said.