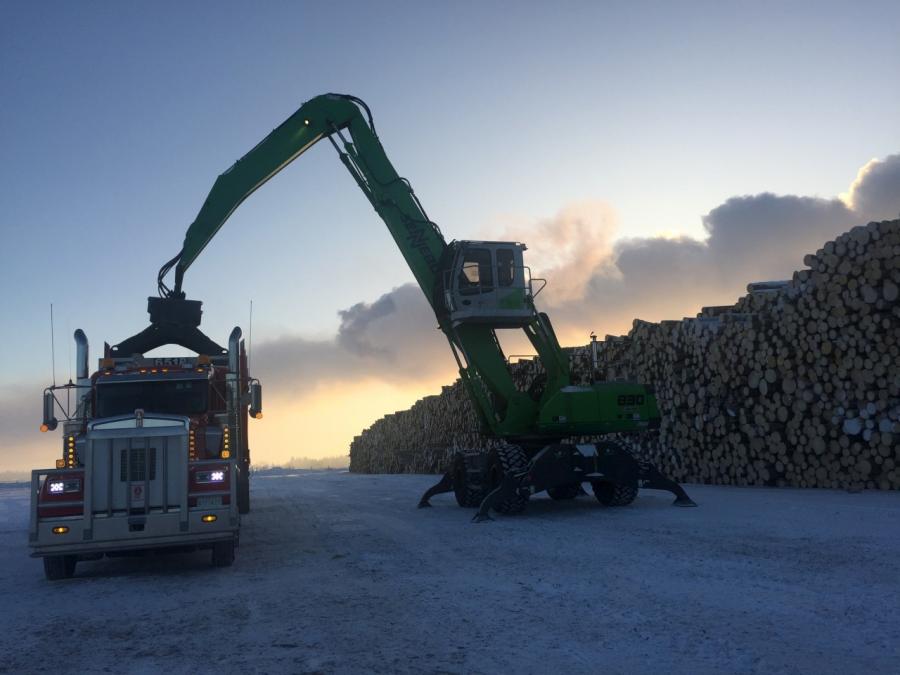 From their elevated viewpoint in the Sennebogen Maxcab, Edgewood’s operators are better equipped to unload log trucks safely, efficiently, and around the clock.

Everything is on the up and up at the Edgewood sawmill in central Saskatchewan. The brand new Linck sawline is ramping up to full production. Yield from its processed wood is up 20 percent. And, due to a new Sennebogen 830 M-T log-handler, summer stockpiles are stacked up higher than ever before.

When the current owners, C&C Resources Inc. bought the former Weyerhaeuser property in 2009, the mill had been shuttered for five years. In 2016, the firm committed to a $25 million upgrade, highlighted by the installation of Canada's first German-built Linck sawline in more than 20 years. The equipment on the site was already aging out when the site was closed. The goal for the new Edgewood Forest Products was to upgrade to current technology, become more efficient and to take on the larger-diameter round wood available in the region.

As Edgewood's General Manager Trevor Reid reports, "Since it's been commissioned, the sawline has become a hungrier and hungrier beast." Its appetite remains constant year-round, so stockpiles must be maximized through winter months to avoid costly summer hauling due to unfavorable logging conditions. "We had to start stocking more wood in the yard. The only way to increase our yard's capacity was to pile it higher."

The old wheel loaders then in use in the Edgewood yard simply were not "up" to the task. Luckily, the management team's trips to Linck's head office in Germany, put them within easy distance of some of the leading names in purpose-built material handlers, including Sennebogen.

"I knew the Sennebogen name previously," said Reid, "but the LIGNA forestry show in Germany was our first chance to actually touch one and see how they work."

After visiting the German factories and observing their operation, Sennebogen's 830 M-T trailer-pulling model was Edgewood's preferred choice. On their return to Canada, they found that Redhead Equipment, Sennebogen's distributor in the region, already had an 830 M-T on the lot.

"We've known Redhead for a long time, and we've worked with them before. So, we gave him a call."

Reid requested an onsite demonstration of the 830 and, after a short trial, the mill bought the unit outright.

Reid noted that "uptime" was a key factor in his evaluations. 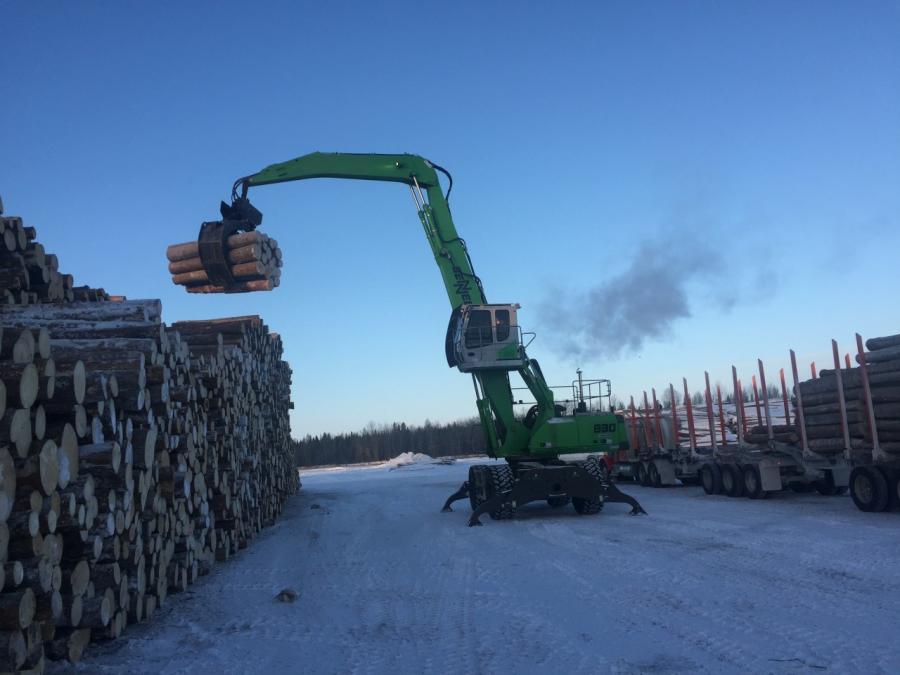 "Our log-handlers have to be available 24 hours a day, five days a week. Our yard has to use the windows that Mother Nature gives us. The Sennebogen's strong frame and overall robust build seem best suited to these very harsh Saskatchewan winters."

He also favored Sennebogen's extensive use of industry-standard components and Cummins engines.

"Cummins engines are very common in Saskatchewan. The engines are familiar to our technicians and parts are plentiful. The way Sennebogen has sourced its service components, you're not married to the manufacturer for proprietary parts."

The 830 M-T has served well, unloading trucks through its first six months in the Edgewood yard. But Reid said its real test will come when the spring thaw finally arrives to northern Saskatchewan.

"We feel that the 830's dual transmissions, driving each axle, are an important feature here. Our yard conditions are tough when the thaw comes, water tends to pool in the level yard and the ground turns to muck while we're trying to forward trailer loads of logs up to the mill. You'll often see ruts 2 and 3 feet deep. The 830 has the pulling strength and traction to handle these conditions, as well as the high ground clearance required."

Reid found that for all its power, Sennebogen held the edge in economic fuel consumption when compared to competitive models.

A "Dream Upgrade" for Operators 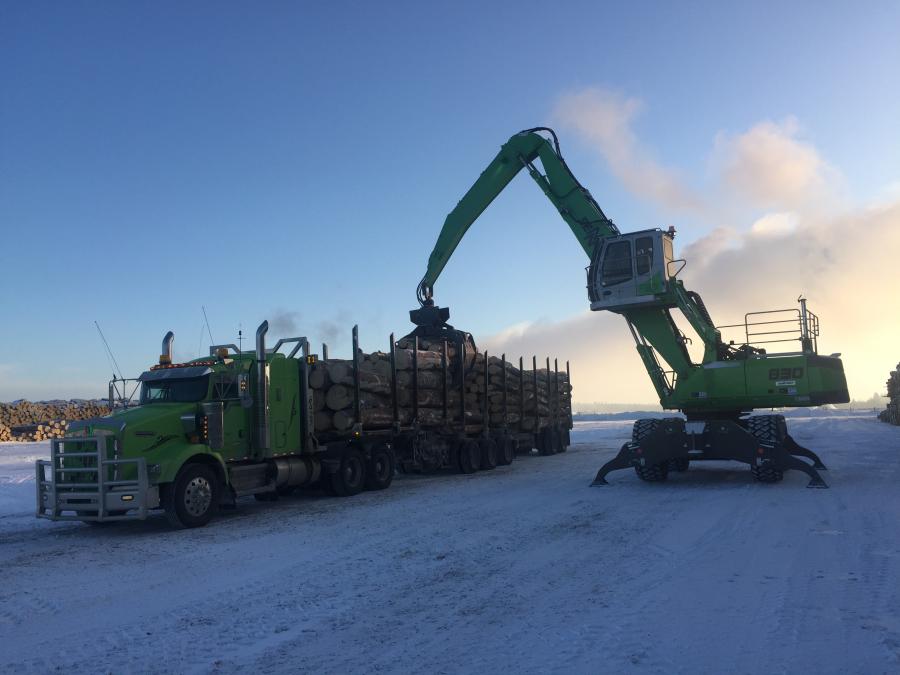 Operators accustomed to the antiquated loaders also have welcomed the 830 as a "dream upgrade." Sennebogen's comfortable, ergonomic Maxcab can be hydraulically elevated so that it can raise the operator's eye-line to over 15 feet above ground level.

"It's a great safety feature," Reid said. "The operators get a clear view down into the trucks they are unloading, so they're not breaking stakes. It helps in stacking and picking from these higher stockpiles as well. The boom's ability to lift and swing through 360 degree of rotation also allows them to be more efficient in positioning the machine for loading."

The Edgewood mill performs most machine servicing with its own maintenance team. Redhead service staff are often in the Carrot River area to support various customers, but Reid decided to send technician Jeff Doerksen to the Sennebogen Training Center in North Carolina for hands-on training.

"We're in a very remote area," Reid said. "We'll have two machines operating so we really need a resident expert on site — Jeff's our Sennebogen guy. He came back with rave reviews, and all it cost us was airfare and a hotel room. He's eager to return to the Center for advanced troubleshooting instruction, possibly next year."