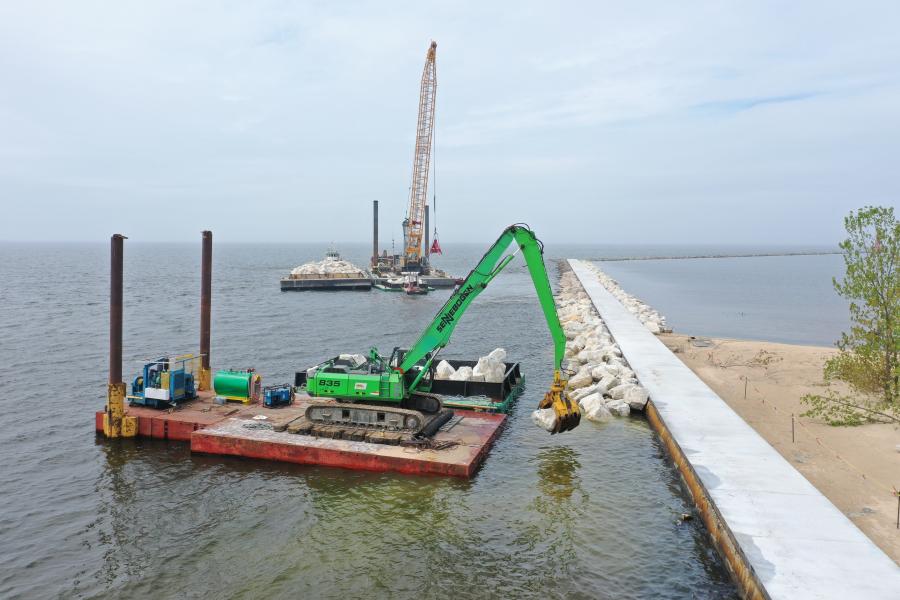 You need to be well grounded any time you start swinging tons of material at the end of a long boom. That need is even more true when you're working on a floating platform.

No one understands that better than the engineering team at Great Lakes Dock & Material LLC (GLDM), one of the leading dredging and marine construction contractors on the Great Lakes.

The firm takes on a host of projects that require heavy lifting on the water or at the water's edge, from building docks and break walls to dredging and environmental remediation projects. So, when GLDM owner Joseph Bailey and Senior Project Manager Mike Russell went looking for new loading equipment, stability was very much top of mind.

"Our fleet contains some of the largest equipment of its type found on the Great Lakes," Russell said. "We have in-house engineering and survey capabilities to support a vast array of projects. We were looking for an efficient machine that can keep pace with our production dredging plant as well as provide versatility for unique projects."

"I had previously managed projects with the Sennebogen 835 R-HD and Sennebogen 840 R-HD at work in other marine applications. They all have full load capacity through their 360-degree working radius.

"Being on barges or improvised platforms, we felt this capability was essential for our machines to have. Crawler mounted undercarriages provide capabilities in unimproved sites as well as safety benefits when walking machines onto and off of barges."

GLDM added a "new to them" crawler-mounted 835 R-HD to its fleet in late 2018, then a larger new 840 R-HD about six months later. While the individual machines are assigned according to the specific needs and scale of current projects, both machines perform the same basic duties: primarily offloading dredge spoils or stone from material barges and, in some projects, actual dredging, placing of stone or construction related activities. 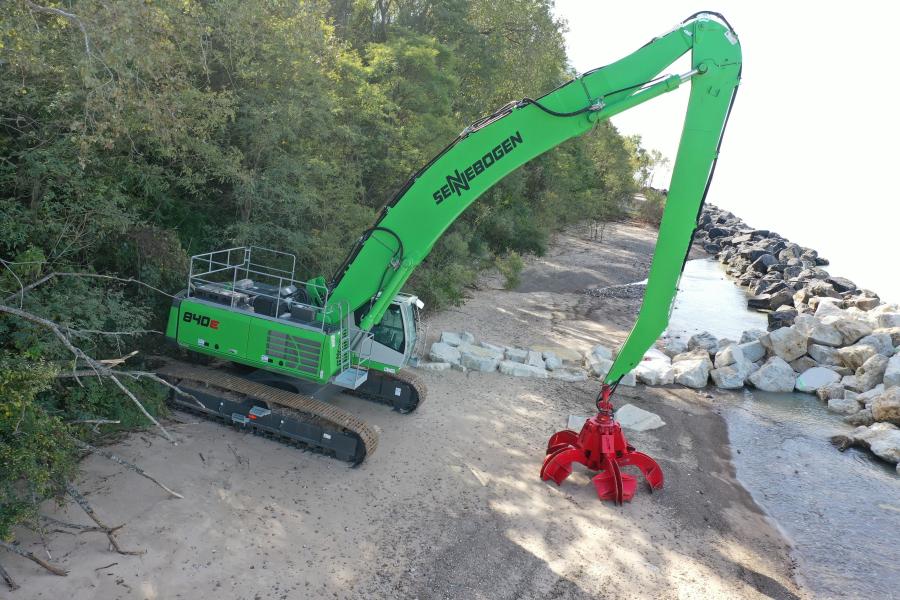 The 840 R-HD with extendable tracks can be shipped without tracks, aiding in portability.

The undercarriage of the 840 also has the ability to ship without the tracks attached aiding in portability (both dimensionally and in total weight). They are easily and readily attached once on the project nearly eliminating setup time, according to the manufacturer.

"We were looking for the biggest machine we could get that was economically transportable; that we did not have to break down to ship," said Russell. "You can save a lot of costs if you can keep the track width under 12 feet: you typically don't need any escort vehicles; no special lanes or superload permits."

This telescoping capability makes the 840 R-HD (again 835 telescopes, 840 tracks come off) a high production machine with the travel footprint of a much smaller model. As noted by Russell, while the tracks on the 835 are telescoping, the one on the 840 are removable, which simplifies shipping by reducing the weight and narrowing the load.

According to Russell, the prep time for transporting the 840 is "nothing at all."

GLDM provides services within about 500 miles of its base in Muskegon, Mich., on Lake Michigan. For most projects within the region, the unit can be economically shipped with the tracks on. In this instance, the unit can be driven itself onto the truck bed then drive off, ready to work, at the job site. The simplicity is an important saving on smaller, short-term projects.

With their combination of 360-degree lifting capacity, stability, long reach and portability, the Sennebogen machines have proven to be an excellent match to the unique needs of GLDM.

"Pound for pound, they're a pretty productive machine," Russell said. He noted that excavators are often more common in this type of work, especially for their digging ability. The purpose-built Sennebogen won out at GLDM on a few key counts.

"It's kind of a compromise with an excavator," he said. "The excavator is not for lifting significant loads high, but it goes deep. When you work on the ground, you can bring the truck right next to you, so you don't really care how much you have to reach out.

"On a barge, your work is often in front of you and the material barge is at the side. You want as much reach as you can. We aren't normally making big stockpiles, but you want to spread the material as far as you can so you're working at maximum radius most of the time.

"Barges require the deck loading to be relatively evenly distributed. This prevents overstressing structural members as well as aiding in stability. And when you're dredging, a critical component is how far down from the barge deck you can reach.

"The arch in the banana boom allows us to reach over the coaming of the material barges alongside. It can also reach deeper depths than the normal straight boom and stick configuration. It can work over the coaming, reach down 20 ft. below the tracks and lift it up. An excavator doesn't have that lift above the track level capability [at full radius] and, the Sennebogen works fast."