There will always be temperature restrictions on concrete, such as a minimum and maximum temperature for concrete while pouring a bridge deck or elements of the substructure. (Michael Amador, TxDOT photographer photo)

Against a watery backdrop, crews in Henderson County, Tex., continue making progress on the State Highway 334 Bridge project. The more than $40 million effort includes the construction of new westbound bridges, upgrades to the existing bridges for eastbound traffic and widening of the two-lane island section connecting to two lake crossings to a four-lane divided highway with a continuous left turn lane.

Austin Bridge and Road Services LP serves as the general contractor for the project,

"The three-mile section of roadway now under construction is currently a bottleneck between the cities of Seven Points and Gun Barrel City," said Shane Cunningham, Tyler District director of construction, Texas Department of Transportation (TxDOT). "It's a two-lane stretch of highway between two, four-lane sections with a center turn lane. The existing two-lane bridges are separated by an island in the middle of the lake. The existing bridges will be left in place, and will eventually be used for eastbound traffic. The new bridges, again separated by the island, will carry westbound traffic."

The existing structures are 55 years old, with an average daily traffic count of almost 20,000. The new bridges (one and two) are 2,560 ft. and 2,320 ft. in length. The bridge approaches are utilizing sheet piling to minimize the need for right-of-way. The concrete drilled shafts are currently being constructed, and the contractor is utilizing permanent casing to construct the shafts in the lake.

By expanding to four lanes (two in each direction), the bridges will match the capacity of the roadway sections to the east and west, allowing for better traffic flow.

"TxDOT has been working to address the bottleneck on SH 334 between Gun Barrel City and Seven Points for many years," said Cunningham. "Identifying the funding with so many needs throughout the state was challenging. We had previously placed this project in 2027, due to the uncertainty of funding, but continued development of the construction plans and right-of-way acquisition so that the project could go to construction if funding were identified sooner than expected. 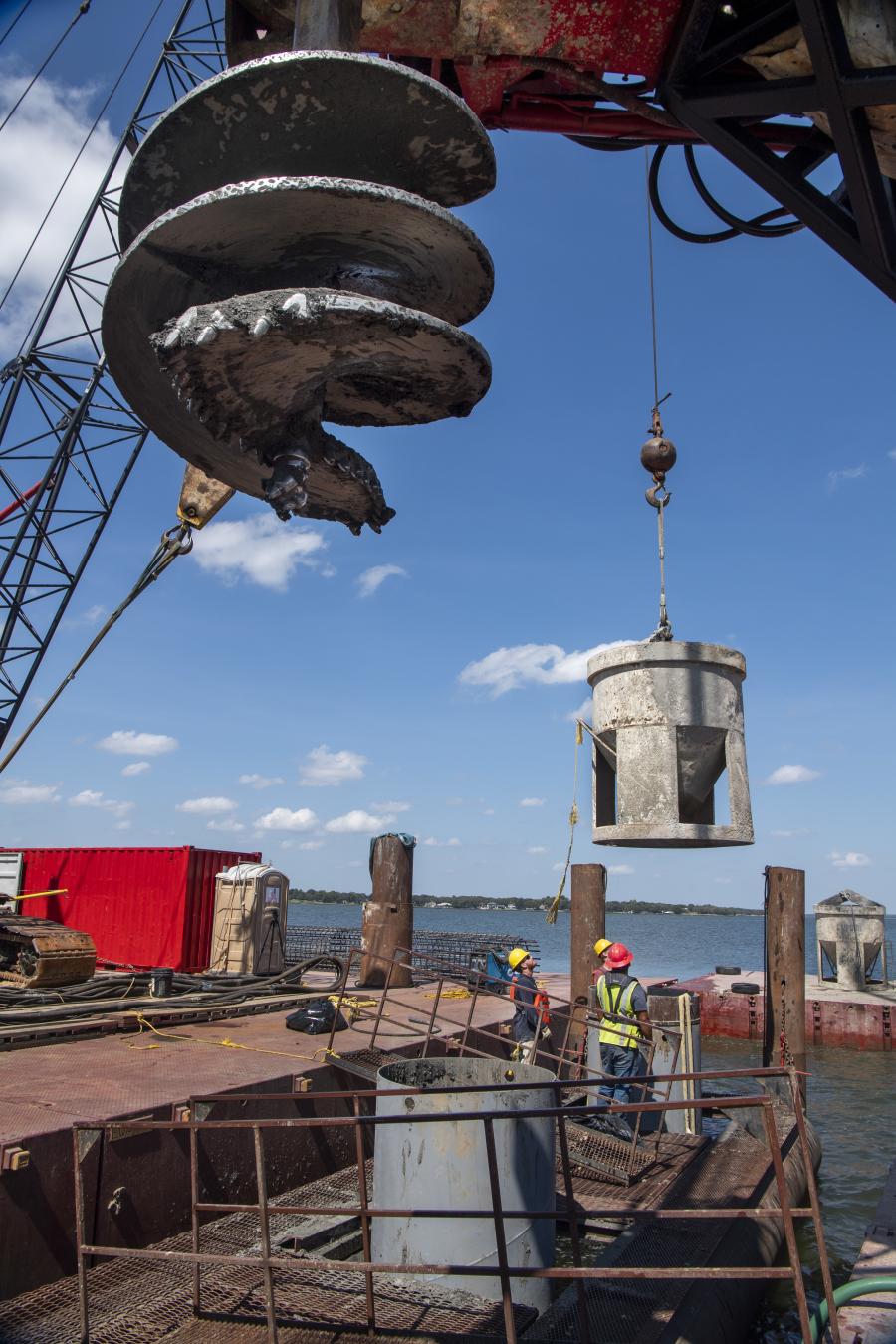 "Thanks to the Texas Transportation Commission, $27 million in funding was allocated to move the project to construction. The estimate to construct new westbound bridges, replace the existing bridges and widen the two-lane island section connecting to two lake crossings to a four-lane divided highway with a continuous left turn lane is $54 million. However, we are able to utilize the existing structures to carry eastbound traffic, construct new westbound structures and widen the island section, at a reduced cost of $42 million. We were able to finalize the additional $15 million needed for construction to let the project in December 2018."

Cunningham noted that impacts to traffic will be minimal.

"Some lane closures are unavoidable due to the required work, but during the design phase, steps were taken to minimize lane closures and provide a disincentive for any closures. The contractor is charged either $500 or $1,500 per hour, per lane, depending on the time of day of the closure. Nearly all the concrete work in the lake will take place from barges and will not affect traffic. Nighttime work is allowed on this project, as well. Typically we see fewer impacts to traffic during nighttime operations.

"The work is going very well, and the contractor is ahead of schedule. The project is 42 percent complete. Drilled shafts have been completed for bridge one, and the sheet piling construction is nearing completion. The contractor will begin column and bent cap construction this month, to allow for beam placement in the near future."

Because crews are working on the water, they face greater challenges.

"There are a lot of moving parts during drilled shaft construction on barges," said Cunningham. "There are multiple cranes in use, as well as a drilling rig. Communication is key for the employees on the barges and operators of the tug boats. Another concern with the drilled shafts is encountering differing site conditions when drilling in the lake, or even on land. During the design phase, we take soil borings to determine the lengths of the shafts. However, there are times when you encounter a different type of soil, and the engineers have to determine if lengthening the shaft will be necessary. This can cause a delay in the project until a decision can be made.

"The project is being inspected by a Construction Engineer & Inspection (CE&I) firm, Halff and Associates. The TxDOT Athens Area Office is very much involved in overseeing the consultant inspection team, and is very pleased, thus far, with their work." 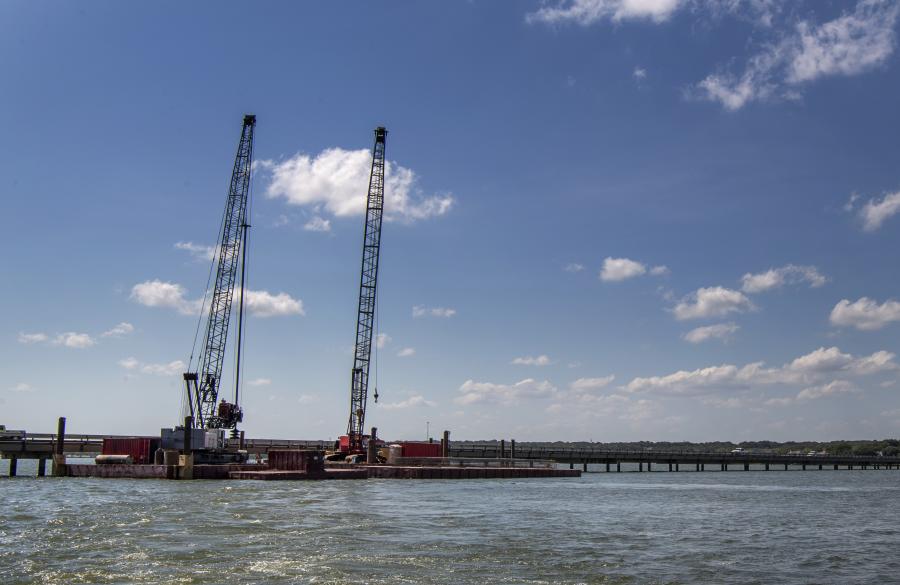 According to Cunningham, the area is very busy in the summer, because of recreation on the lake.

"It was very important to not negatively impact the residents around the lake during construction in terms of traffic delays. Therefore, it's necessary to complete most of the construction from the lake utilizing a bulk head. This adds several levels of difficulty and a host of challenges. Drilled shafts pose the most challenges, due to the process they require. Safety also is a concern on a project like this. It's difficult to not become complacent at times, after being on a barge for much of the day. And it's very important to always wear the proper personal protective equipment."

Already, drilled shafts for bridge one have been completed, while sheet piling construction at the abutments is almost finished. Cement treated subgrade for the approach to bridge two has wrapped up, along with installation of driveway pipe and safety end treatments for pipe.

Current work involves drilled shafts for bridge two, column construction for bridge one, subgrade treatment for additional bridge approaches and driving sheet piling at abutments. Since most of the work is on the lake, there was minimal clearing required.

"The only clearing took place at the far east and west ends of the bridges and on the island in the middle. There will not be any need to demolish the existing bridges, since we are keeping the structures open to traffic," said Cunningham. 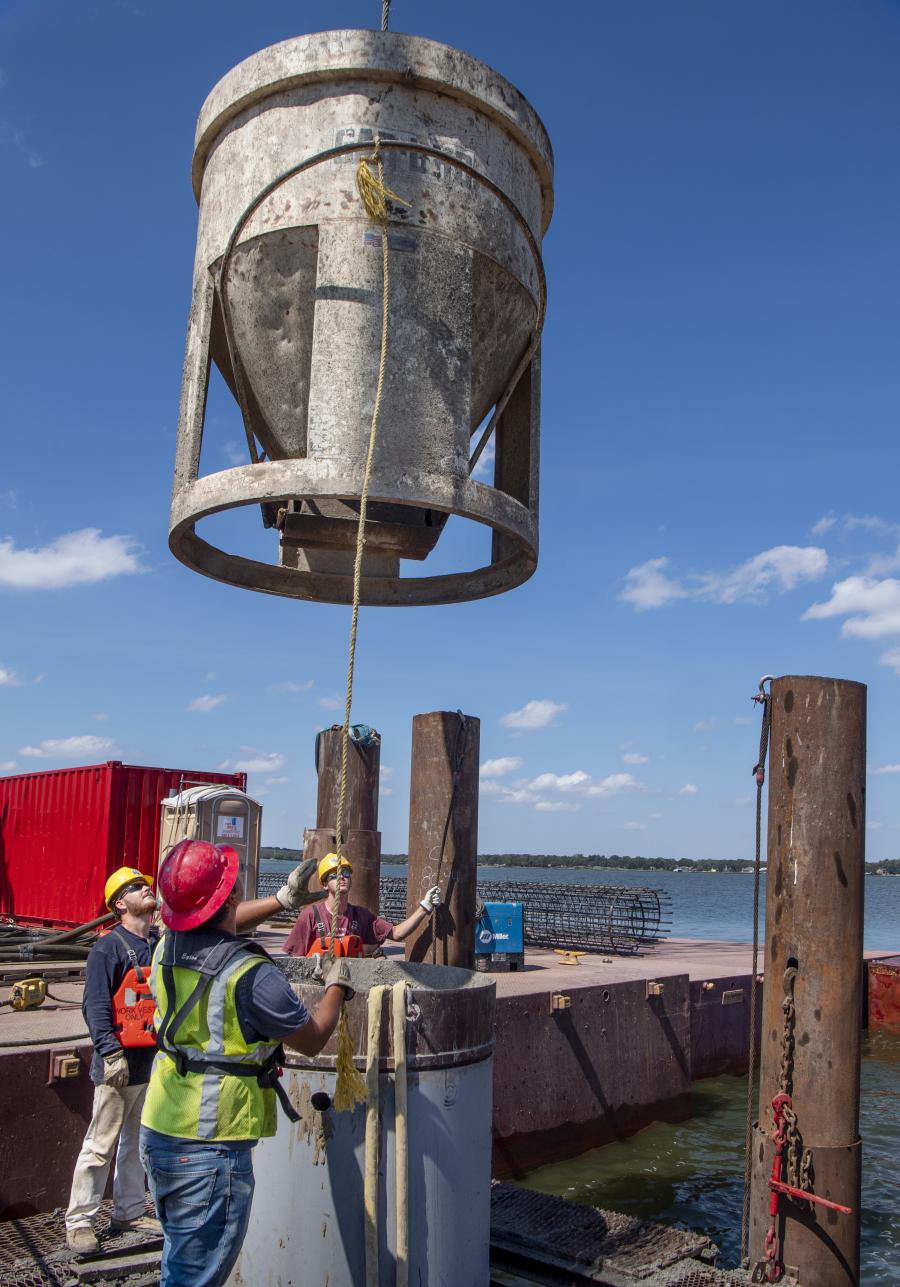 "As for widening the island sections and utilizing the existing structures to carry eastbound traffic, said Cunningham, "The roadway in these sections is being reconstructed. The existing pavement will be removed, and the subgrade will be brought to grade by bringing in additional embankment. The subgrade will be cement treated and then Superpave hot mix will be laid several inches thick, depending on what side of the project the work is being performed.

"The west side of the project will receive additional lifts of hot mix to match the surface we will be tying into. The east side will actually be a final surface of 9 inches of concrete pavement to tie into the existing concrete pavement in Gun Barrel City."

Transitioning from two to four travel lanes from Gun Barrel City to Seven Points required a fair amount of planning.

Cunningham said weather generally has less of an impact on bridge construction jobs taking place over water, because there's no need to dry muddy subgrade after a rain.

The project has two main phases.

"The first phase is to complete the bridges and approaches for the westbound lanes. The second phase is to reconstruct the roadway portions of the existing eastbound lanes. The project was let as an A+B job, which means the contractor bid the number of days they felt the project could be completed in. If they are able to complete the job ahead of their schedule, they could earn an early substantial completion incentive of up to $135,000," said Cunningham.

Drilled shafts are the most time-consuming part of the work.

"Everything has to be transported to the shaft location via tug boats, including concrete. Each shaft is a process. The bent template must be moved and set in place by the crane from a barge. Then the permanent casing must be barged out to the template and driven into place. The drilling rig then excavates the shaft and the steel cage is barged to the shaft. The concrete is then barged to the shaft and can take multiple trips. The contractor is doing well to complete two shafts a day."

The project is expected to be completed by November 2020. CEG