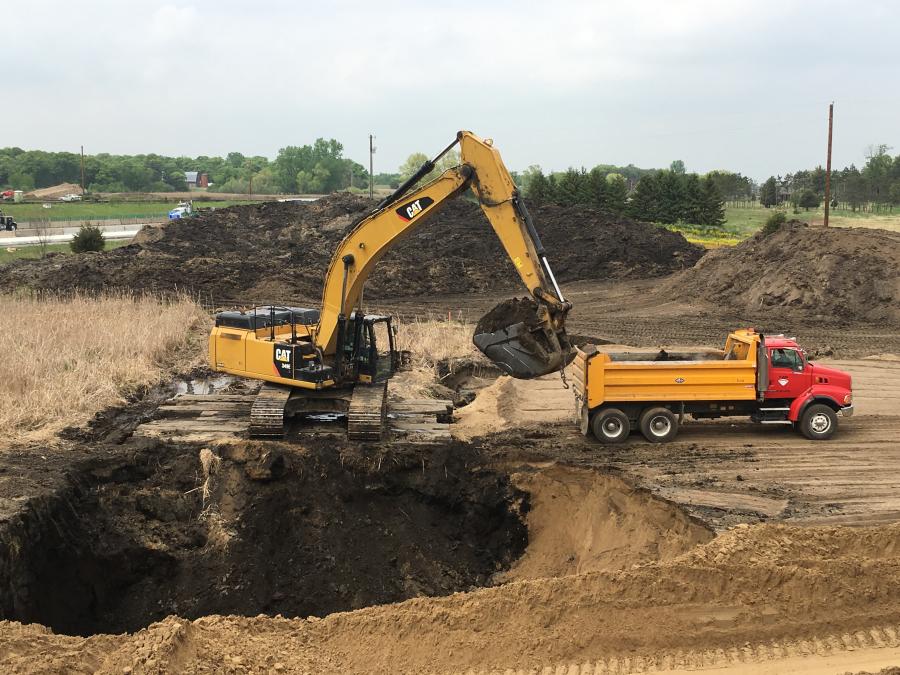 Wetlands impacted by the project will be restored following the work, and lost areas will be replaced nearby.

Started in October 2017, crews from Shafer Contracting Co. have completed 15 percent of the work for the two-year Minnesota Department of Transportation's (MnDOT) $60 million resurfacing of the I-35 North Metro Split (I-35E/I-35W and I-35).

The road surfacing includes nearly six mi. (three lanes in each direction) that covers an area from Lino Lakes to Forest Lake, including a part of Columbus. The work, which will be completed in late October 2019, is being funded with combination of state and federal dollars.

The goal of the project is to improve ride quality, safety and traffic flow in an area just south of the I-35 split to a half mi. north of Highway 8 at the Chisago/Washington county line.

“Road resurfacing helps to preserve and extend the use of the pavement,” the project web site stated. “The work will also include replacing three bridges.” 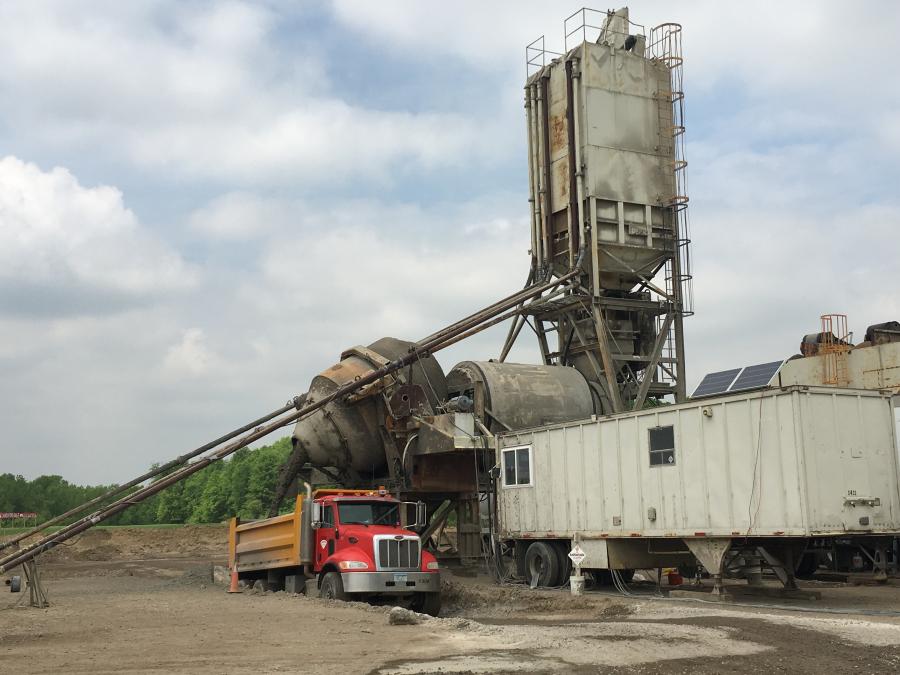 The work includes the replacement of the Highway 97 bridge over I-35 with a diverging diamond interchange for better traffic flow and improved safety, updated crosswalks at Hwy 97 to meet modern accessibility standards, the replacement of a flyover ramp from westbound Hwy 8 to SB I-35 with a loop ramp and drainage improvements.

“Our planning cycle for projects typically starts five years prior to construction,” said Denise Workcuff of MnDOT. “There's a lot of maintenance that takes place in between these cycles. The existing bituminous pavement was in bad shape and was in need of an overlay. The roadway had severe cracks, potholes and patches in the pavement surface and underlying layers. The bridges on the corridor are original to when the freeway was built and at the end of their useful life. The concrete pavement for this project is designed to last 35 years.

“Currently, Highway 97 experiences some congestion especially during the morning and afternoon rush hours,” said Ryan Coddington. P.E., project manager. “The diverging diamond interchange will improve accessibility to the freeway for business in the area. In addition, there is no sidewalk on the existing bridge. A trail will also be provided across the new bridge. This will increase accessibility for bike and pedestrians across I-35.

This is a Design-Build project, and Shafer partnered with TKDA to design it.

“One challenge we attempted to resolve in design was whether or not we could keep the concrete median barrier in place with the concrete overlay,” said Coddington. “Because of road profile adjustments that were needed to improve the drainage throughout the corridor, we ultimately decided to replace the barrier.”

Another challenge was deciding how to efficiently and effectively pave the concrete overlay without having unnecessary overruns in the concrete thickness said Tim Clyne, P.E., Metro Materials Engineer.

“The contractor ultimately solved this challenge by profile milling the underlying bituminous pavement — by improving the cross slope and profile with the milling, they can minimize the concrete overruns,” said Eric Embacher, P.E., construction project manager. “One more challenge was figuring out how to fix the holes, cracks and defects in the underlying pavement after milling and prior to the concrete overlay. The contractor decided to achieve this goal by patching holes with bituminous and placing reinforcing steel in the concrete overlay to strengthen the pavement across these weak areas.”

Shafer is using a UV light cured pipe liner, as well as a geotextile fabric under the concrete pavement to provide drainage and prevent reflective cracking in the overlay. 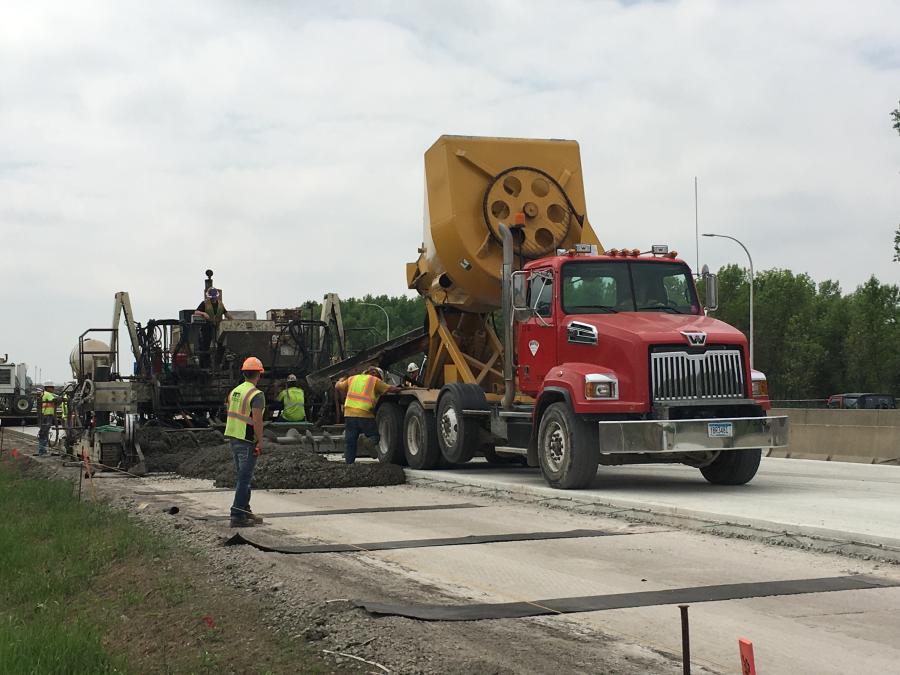 Ramp closures are minimal — the ramp to EB Highway 8 will be closed for approximately two weeks in May/June.

Approximately 82,000 vehicles per day, including 3500 heavy trucks, travel this roadway.

“Motorists are slowing down in the construction zone and planning ahead to give themselves more time to reach their destination,” said Workcuff. “We also have a queue warning system to warn motorists of stopped traffic ahead.”

MnDOT also is helping local businesses affected by the construction with programs, guides and websites with information to retain customers and provide routes for employees to get to work.

Public meetings on the project started in 2016 and are continuing as the project progresses.

“Our I-35 North Metro Split public meetings were well attended by residents, motorists and businesses and have provided us a good opportunity to engage with the public and listen to their questions and concerns.”

The work season runs from the beginning of April to mid-November, although some bridge work will take place during the winter.

“Traffic is the number one challenge,” said Chris Tredinnick, Shafer's project manager. “This is the main thoroughfare out of town for northern Minnesota on the weekend. In the interest of the public, to ensure traffic flow, we took the two northbound lanes and instead of having them side-by-side, we split them around the in-place median barrier. This allowed us to maintain three lanes on the southbound side, an extra lane beyond the contract requirement.”

Another challenge is building through a wetland area, which led to several geotechnical issues and innovative solutions.

“We're using wick drains, which I've never used before, but have been incorporated into MnDOT projects in the past,” said Tredinnick. “We're also doing a column supported embankment — a relatively new technique, especially in Minnesota. Menard Group USE, a subcontractor, is taking care of this and they are good at what they do.”

The wetlands where the embankment is taking place need the poor soils mucked out, excavated and backfilled with granular material.

“Now we're going to install the wick drains and drill the columns into the ground that go down 40 feet and give the support you need for the new embankments,” said Tredinnick. “So far we haven't had to do a lot of de-watering, save for some minor utility work which has not been too expensive.”

Impacted wetlands will be restored following the work, and lost areas will be replaced nearby.

The work zone is tight, and the crews have few laydown areas. However, two weigh stations, which will be updated, are serving this purpose, as are the areas between the ramps and mainline highway at the interchanges.

“With the traffic congestion, it's difficult to get in and out of the work zone,” said Tredinnick.

In terms of utility issues, private utilities are relocating their infrastructure. For the public utilities, storm sewer work has some culvert removal, replacement and rehabilitation, which includes installing in-place liners.

“We're struggling with one utility that is not cooperating,” said Tredinnick. “It said in our contract that they were going to move their facility in six weeks, and now they're telling us that the contract didn't cover the entire scope of their work and that it's going to take six to nine months. The work that the utility is impacting is not a critical path and fortunately we have time to deal with it, but eventually it has the potential to become an issue.”

Concrete barriers separate the crews from the traffic, and measures have been taken to ensure safe access to the work site.

“MnDOT did the right thing when they let the job — they didn't have any tight completion dates, and they gave us time to plan the job,” said Tredinnick. “We did some minor work last fall so that we could hit the ground running in 2018. MnDOT stressed that they wanted to keep the budget as tight as possible. They gave us until the end of 2019 to complete the project so we didn't add excessive overtime and acceleration costs to our bid.

The bridge work is just starting. The bridges are 165 ft. (two lanes), 180 ft. (four lanes, part of a divergent diamond interchange), and 180 ft. (one lane), with the potential to add a future lane. Tredinnick noted that a major challenge for the bridge work is reducing the cost, particularly for one bridge.

The only prefabricated parts being used for the bridge work are the concrete beams.

The roadwork plan is based on various steps taking place simultaneously, which has dirt work crews, a concrete paving crew, a bituminous crew, an electrical crew and one or two bridge crews.

A peak work day can see about 100 construction workers on site.

For the most part, Shafer is using Cat equipment. This includes Cat 320S, 336S, 345S, and 349S backhoes and Cat D6RS and D6T dozers. Shafer also is using Komatsu loaders and a variety of Ingersoll Rand, Dynapac and Bomag rollers.

Shafer owns most of its equipment but is renting some of the Cat backhoes from Ziegler Cat, the local Cat dealership.

“Typically we can do repairs on the same day,” said Tredinnick. “We have a mechanic on site for the dirt work crew and two full-time mechanics for the paving crew. Wear and tear issues cover blown hoses, filters, hydraulic systems, and pumps — normal wear and tear. We have 500,000 square yards of milling and mills are somewhat maintenance intensive. We began our milling process 10 days ago and the mill was immediately down on the first day and was down for about five hours a few days later — and this is just the first 20 percent of the job.”

However, the mechanics are doing the repairs immediately and when other pieces of equipment break down and replacements are needed, machinery can be transferred from other projects and the shop to the work site.

Based on the work done thus far, Tredinnick is confident about meeting future benchmarks.

“We experienced the coldest and snowiest April on record in Minnesota, and it caused us to be nine days behind schedule, but we'll make that up. With the traffic and everything, it's been a battle, but our people are extremely pleased that we have this job.”