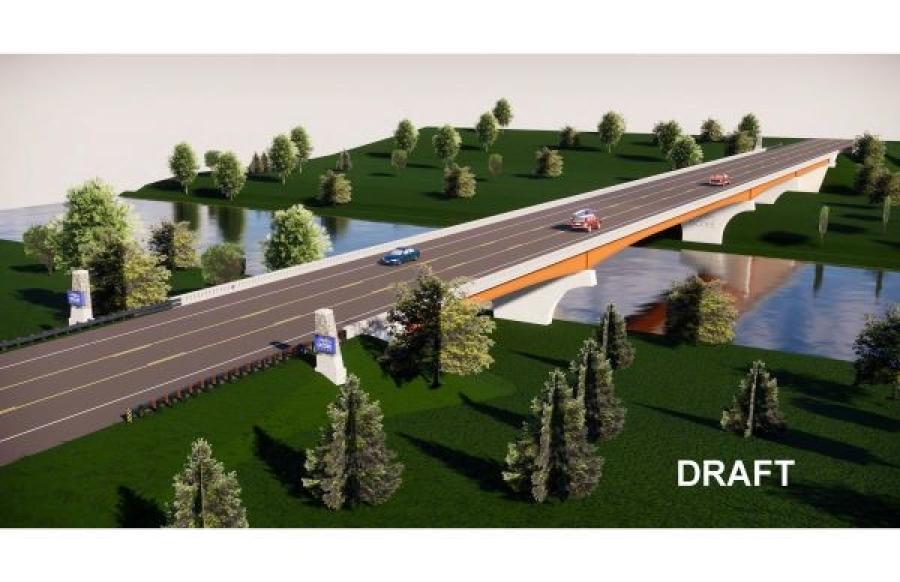 The new bridge will be a three-span, 600-ft.-long steel I-beam structure that will have two, 12-ft.-wide travel lanes, one in each direction, and 10-ft.-wide shoulders. (TDOT rendering)

As mountain river enthusiasts and others head east this summer on U.S. Highway 64/TN 40 toward the Ocoee River and Cherokee National Forest in Polk County, Tenn., they will pass the state's $12.6 million "signature" bridge as the new structure takes shape alongside its aging predecessor.

Many motorists may have never noticed the Ocoee flowing beneath them when they crossed the old highway bridge in the past, but that will not be the case when the new span is finished in 2022 as an official entry into the Appalachian Mountains' southern jewel, the Ocoee River Gorge.

"The project is a ‘signature' bridge that is meant to be a gateway to the Ocoee region," Tennessee Department of Transportation (TDOT) spokesperson Jennifer Flynn told the Times Free Press last September when the work first got under way.

The new U.S. 64/TN 40 bridge is being constructed under a design-build contract that includes the contractor, Charles Blalock and Sons Inc., based in Sevierville, Tenn., and Volkert Inc., a Mobile, Ala., engineering and design firm.

In June, Flynn gave the Chattanooga newspaper an update on the U.S. 64 replacement project so far.

"The contractor has a bridge crew on site, working on foundations for the new bridge piers, and they are constructing forms for those piers," she noted. "The roadway has been graded on the west side of the river, and the subcontractors are on site relocating utilities on the east side of the river to accommodate the new alignment in that area."

After that work is done, earthmoving will resume on the east wide of the project, Flynn explained.

Since the new bridge is being constructed next to the old one, drivers passing through the work zone can now see some portions of the new bridge structure that have already been poured, including the first abutment and pier footer. The steel girders for the new structure have been fabricated but have not yet been delivered to the project site, she said.

In stark contrast, its replacement will be a three-span, 600-ft.-long steel I-beam structure that will have two, 12-ft.-wide travel lanes, one in each direction, and 10-ft.-wide shoulders. A dedicated center turn lane also is planned for the widened approaches.

What sets the new bridge apart from most others in the area is it will feature the Ocoee River emblem, rock finishes, an aesthetic bridge rail and lighting that will highlight the entrance into the Ocoee River Gorge and to the Parksville and Ocoee lakes nearby, TDOT officials told the Times Free Press.

The state agency's online project page for the U.S. 64 Bridge Replacement noted that the construction is being done in three stages:

In the days and weeks ahead, the bridge crews will continue work on the first and second piers as well as a second abutment, Flynn said.

"Once this is complete, the steel girders will be delivered and installed over the river," she said to the Chattanooga newspaper. "This will require closing the river to all recreational traffic for a short time."

There is not yet a date for that work or closure.

While that takes place, grading crews will complete their efforts on the roadway approaches to the new bridge, she said.

"We hope to complete construction of the new bridge over the coming fall and winter and shift traffic to the new bridge in spring 2022," Flynn added. "Once that is done, work will begin on the demolition of the old bridge."

Throughout the duration of the bridge replacement, two travel lanes are set to remain open, apart from short-term lane closures to install the concrete spans and for the old bridge's demo, according to TDOT. Detours should not be needed.