Significant Boost in Turnover of Liebherr Group in 2021 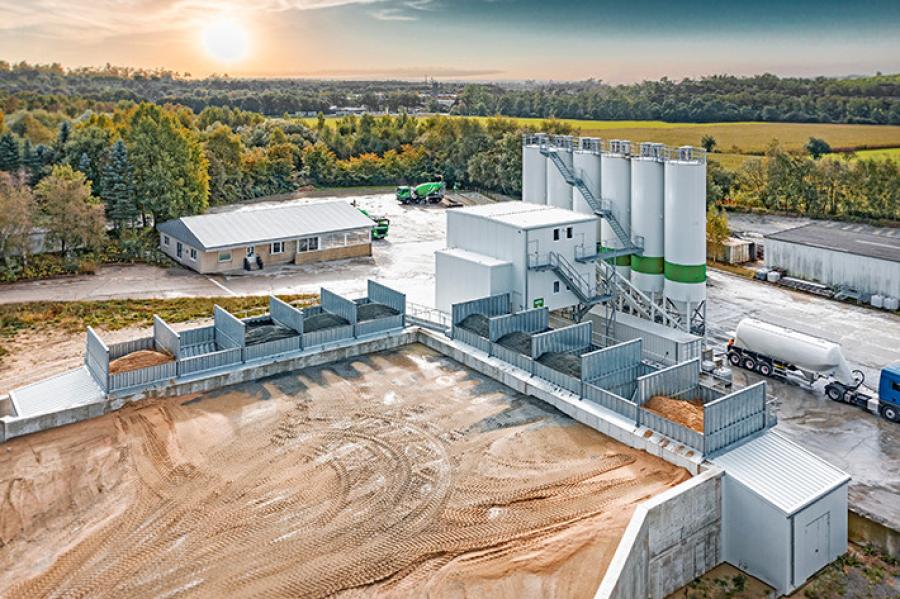 The Betomix dual concrete mixing plant has a discharge output of up to 300 cu. yd. per hour.

The conditions in the past financial year were also difficult for manufacturing companies. From the second quarter in 2021, to some extent, it was extremely difficult to procure various raw materials, components and electronic parts. This resulted in price increases and bottlenecks in the global supply chains. Despite that, Liebherr recorded a significant increase in sales revenues compared to the previous year. The Liebherr Group grew in 11 of its 13 product segments and in almost all of its sales regions.

Revenues in the earthmoving, material handling technology, deep foundation machines, mobile and crawler cranes, tower cranes, concrete technology and mining product segments were 17 percent higher than in the previous year. In the other product segments, including maritime cranes, aerospace and transportation systems, gear technology and automation systems, refrigerators and freezers, as well as components and hotels, Liebherr achieved total revenues 3.9 percent above the previous year.

Sales increased in the European Union, which has traditionally been the group's strongest sales region. High growth rates were recorded in almost all EU markets, with France in particular showing above average development. Outside the EU, there was a marked rise in sales in the United Kingdom, among other regions.

Positive development also was seen in North America, as well as Central America and South America, where strong growth came especially from Brazil. The Liebherr Group faced declines in Africa, as well as in the Near and Middle East, whereas the financial year in Asia and Oceania ended with a moderate rise.

In 2021, the Liebherr Group achieved a net profit above the level before the pandemic. Operating results and the financial result grew considerably compared to the previous year. The 2021 business year also saw a significant increase in the number of employees. At the end of the year, the Liebherr Group employed 49,611 people worldwide. Compared to the previous year, this constituted an increase of 1,686. 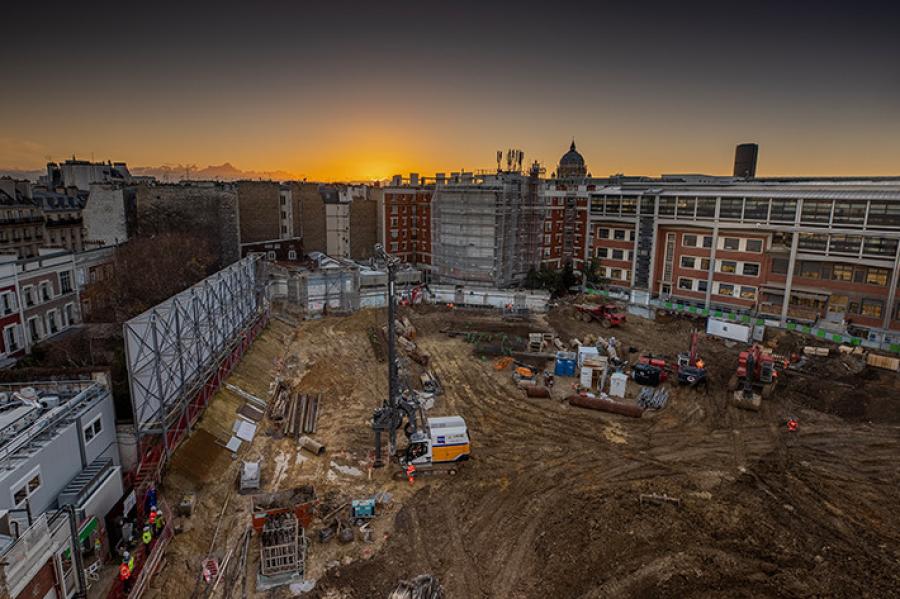 As a technology company, the Liebherr Group pursues the goal of making a decisive contribution to technological progress in the sectors relevant for the Group. Liebherr invested millions in research and development last year. The bulk of this was used in the development of new products. Numerous cooperative ventures with universities, or higher education institutions and research institutes were initiated or continued.

Alternative drive technologies continue to be a focal point of the research projects at Liebherr. The Liebherr Group takes a technology neutral approach. In 2021, it worked, for example, on hydrogen-powered combustion engines and their injection technologies, as well as electric drives. For instance, Liebherr expanded its portfolio of construction machines with electric drives with two all-electric truck mixers on five-axle chassis frames, the two electric crawler excavators R 976-E and R 980 SME-E and the battery-powered crawler cranes LR 1160.1 unplugged and LR 1130.1 unplugged both with zero local emissions.

The start of the development phase of the first all-electric offshore crane marked the launch of the electrification of the product portfolio in this area. Furthermore, Liebherr prepared various product lines for the use of hydrotreated vegetable oils (HVO) as a fuel. The Ehingen and Kirchdorf an der Iller sites (both in Germany) are now already fuelling all machines with the climate-neutral fuel ex works as standard.

Digitalization was another focal point of R&D activities. Among others, a new range of refrigerators and freezers with resource-friendly freshness technology and digital networking was launched. In addition, in several product segments, the existing technologies were optimized for remote control, automation and networking and the Liebherr-Remote-Service App was extended. It also is worth highlighting the development of two assist systems for mining trucks, which offer automatic steering assistance, reduce the strain on the driver, and lower fuel consumption. 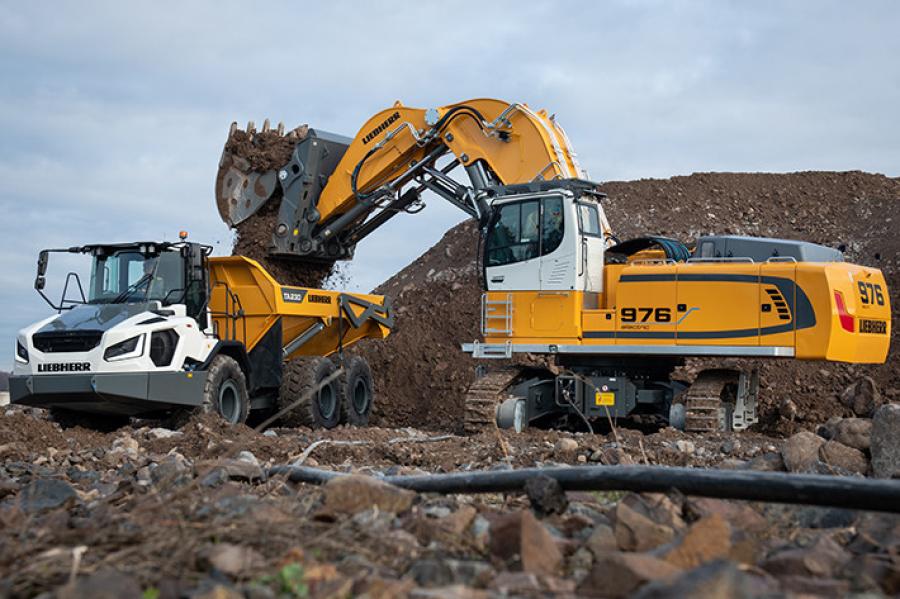 The R 976-E is one of two electric crawler excavators for mining and quarrying applications presented by the Liebherr earthmoving product segment.

The group invested millions in its production sites and its global distribution and service networks. In the concrete technology product segment, a new production plant went into operation: Liebherr-Concrete Technology Marica EOOD in Plovdiv (Bulgaria) supplies Liebherr-Mischtechnik GmbH in Bad Schussenried (Germany) with pre-assemblies and steel constructions for truck mixers. To further expand its presence in the Asian market and meet the high demand from the wind and construction industries, the group began construction of a new components plant in China: Liebherr Components (Dalian) Co. Ltd. will produce slewing bearings, gearboxes and hydraulic cylinders at the Dalian site, starting at the end of 2022.

Last year also saw the construction of a new assembly line for gearboxes in India. In addition, a largescale expansion was approved for the plant in Ehingen (Germany). Step-by-step, investments will be made in the expansion until 2030 in order to significantly increase its production capacity and meet the rising demand for mobile and crawler cranes. 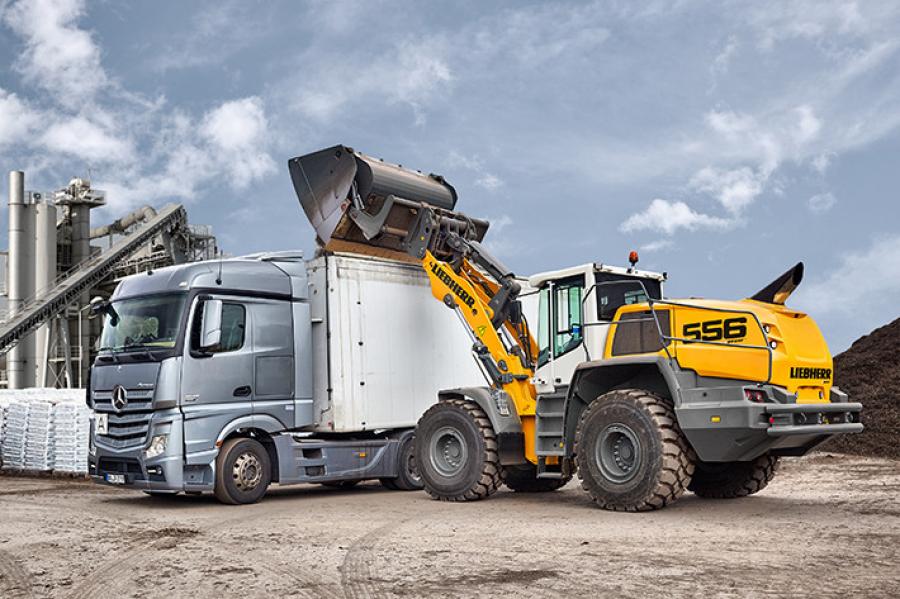 In the course of continuous model upgrades, the performance of the L 550 and L556 XPower wheel loaders was increased in terms of engine, working hydraulics and linkage.

The Liebherr Group has started 2022 with a very good order situation. Opportunities arise from the expected increase in demand in the various industrial sectors in which the Liebherr Group is active. However, the negative effects on the activities of the Liebherr Group due to the war in Ukraine can already be seen. Liebherr is monitoring and assessing the current situation in Ukraine and Russia on a daily basis and is currently in the process of adjusting its Russian activities to the extensive sanctions imposed on the country.

At the same time, there are still uncertainties with regard to the pandemic-related restrictions, the effects of steep price increases for many goods and services, shortages of certain raw materials and the lack of skilled workers, as well as bottlenecks in different supply chains. It also is unclear how fiscal and monetary policy measures will ultimately affect the Liebherr Group. Despite the difficult conditions, Liebherr is cautiously optimistic about the rest of the year.

On April 4, 2022, the Liebherr Group published its current annual report. In addition to detailed figures, it contains a magazine section reviewing the past financial year.

The annual report of the Liebherr Group can be found online at www.liebherr.com/liebherr-annual-report. 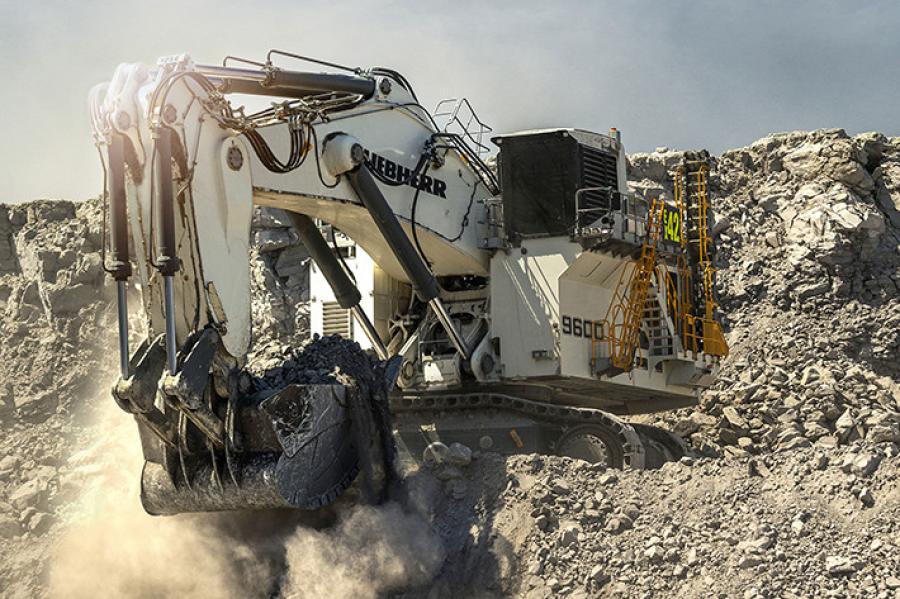 The Liebherr R 9600 is the next generation of hydraulic mining excavators.