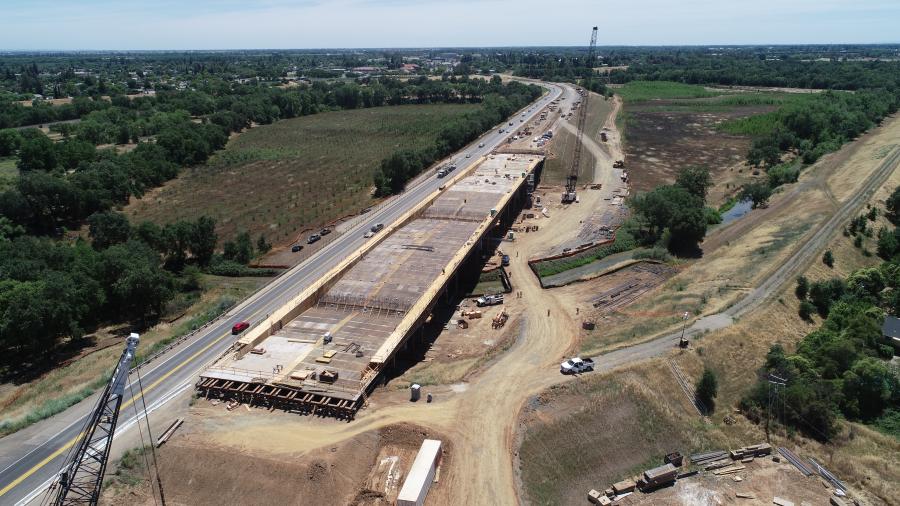 MCM Construction Inc. is the general contractor for the $84 million bridge replacement project north of the city of Marysville.

MCM Construction Inc. is replacing the Simmerly  Slough Bridge on State Route 70, north of the city of Marysville at a cost of nearly $84 million, as the bridge no longer meets current design and seismic safety standards.

The state-funded project was awarded to MCM Construction in August 2019, and work began shortly afterwards in September. Environmental clearance was secured in June 2017 and right-of-way acquisition was completed in May 2018. The goal is to complete the project in early 2021.

MCM has completed the substructure and superstructure of the new bridge and poured the new concrete deck, and the site work for the new road alignments. 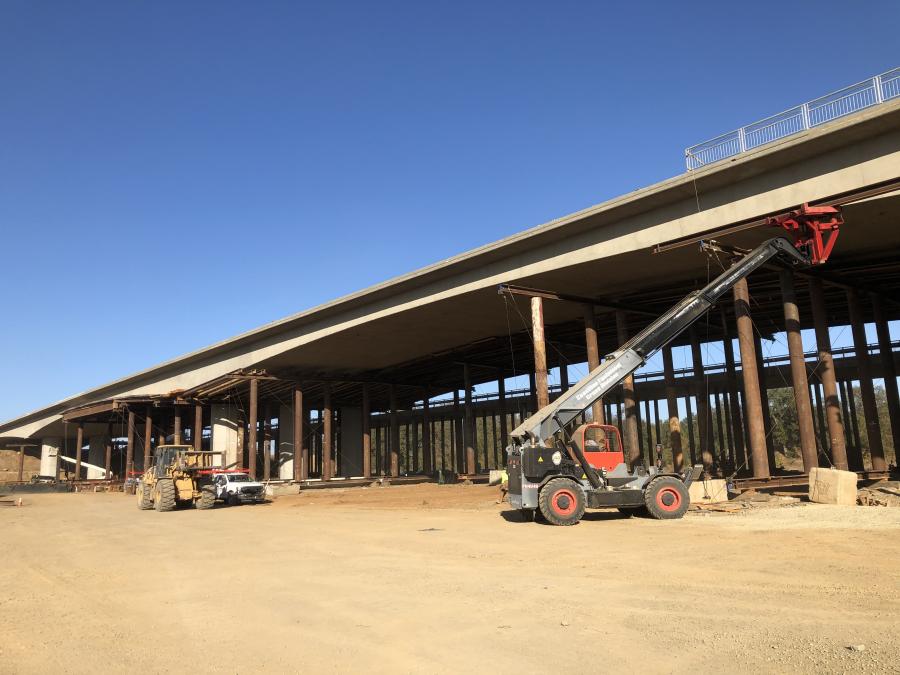 The new five-span bridge –  a 1,061-ft. long box-girder-type bridge, with 8-ft. wide paved shoulders, separated pedestrian/bicycle facilities and two-lanes in each direction – is being built parallel and west of the current structure, which is 531-ft. long and has one lane in each direction. This bridge was constructed in 1957.

There was no soil, water or utility issues that affected the job and the large work zone provided ample space to conduct operations efficiently. The general contractor built an access road from one side to the other and another up and down over the levee to access SR 70. This involved a lot of earth work, which was done by Lamon Construction Company Inc. (Yuma, Calif.) over a three-month period, which had crews clear trees and brush.

"The bridge also is experiencing scouring activity in which water has been removing sediment such as sand and rocks from around the bridge piers or abutments," said Gilbert Mohtes-Chan, public information officer of Caltrans, District 3. "The new bridge is designed to the Caltrans Seismic Design Criteria version 1.7 for a 6.5 magnitude earthquake and a peak ground acceleration of 0.23g. The bridge is located in an area of moderate seismic risk based on the USGS hazard maps. The Draft Environmental Document was completed in December 2016, and design began in January of 2017."

The work also includes a realignment of the highway approaches leading to the bridge. The bridge will be striped for two lanes, have sidewalks on both sides, and a concrete barrier separating the shoulder from the sidewalk and bridge railing. 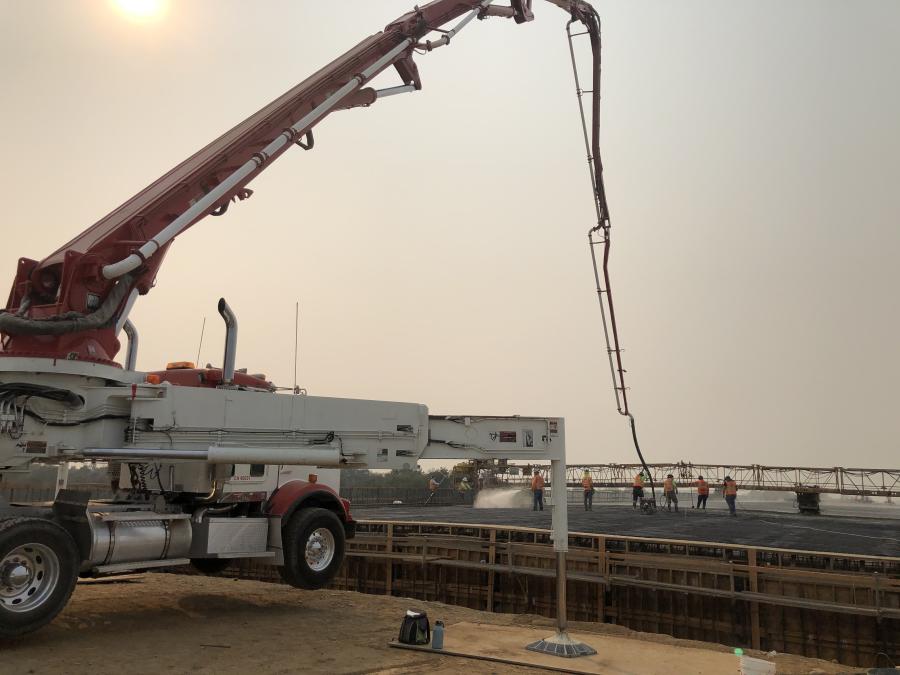 "The bridge was designed to span the existing levees to avoid creating weak points, thus increasing their safety in high-water events," said Anthony English, Caltrans bridge construction engineer. "During development of the project, a shift in the proposed alignment was able to significantly lower the profile of the new bridge, saving millions of dollars due to the decrease in imported fill volumes. Subsurface conditions required the use of large diameter cast-in-drilled-hole concrete piles. Permanent pile casings were specified for the upper portions of the piles to mitigate caving soils. The permanent casings were later eliminated by a change order due to the contractor's use of full-length temporary casings to install the piles."

The lifespan of the post-tensioned haunched box-girder bridge is 50 to 75 years.

"The shape of the girder economizes material by increasing the depth where the stresses are highest," said English. "As a bonus, the haunch shape allows for additional clearance over the levees."

The earth work crews used a compactor, a dozer and many dump trucks.

Superstructure operations began immediately afterwards, with the falsework placed from one abutment to the other. This part of the operation went according to schedule.

A Leffer 12-ft. oscillator was used to help with the 12 CIDH piles. MCM used four-way temporary oscillating casings – a casing that is in and off-side of the bridge as the pouring is under way. These type of  oscillators are rarely found on the west coast. 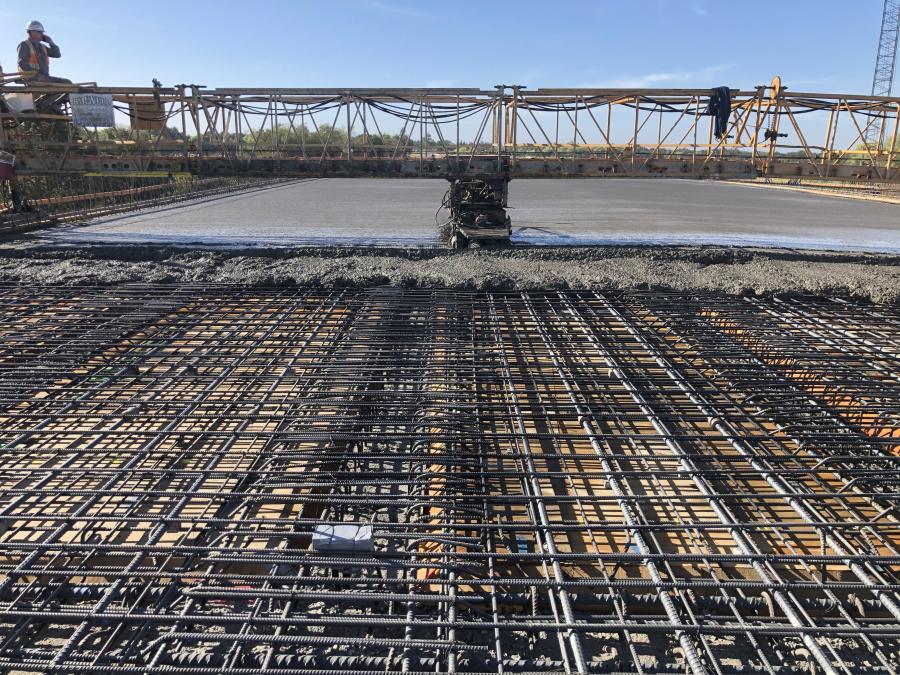 The 895 is a digging crane and the oscillator was attached to the  front of it as it was digging out the inside of the casing, using a big spherical grab and a hammer grab. The 1300 was hoisting pieces of casing as they were attached to the structure. After the oscillating casing is done, the casings were locked together. This crane also hoisted the cages, which were 109,000 lbs. each. They were long because the columns and CIDH were one piece. Most cages are around 180 ft. long and were lifted without a frame. The American crane was utilized as a tailing crane when the cages were hoisted. This was necessary as a cane was required to pick up the back end of the cages. As concrete was being poured, this crane held up the semi-pipe and then a fluid pump.

Save for some concrete pours, the work is being done via day shifts.

The concrete, specified by Caltrans for bridge and deck, was provided by Cemex. Some of the concrete pours for the deck were done at night during the summer due to the heat. Pours also were done at night for high volume pours between 1,500 and 1,800 cu. yds., which maximized their delivery truck capacity. These night pours eliminated concerns about traffic.

The pouring operation was based on two deck pours and three soffit pours. It took about 10 days after a pour to stress a completed section.

The old bridge will be demolished after the new structure is completed, with the operation expected to begin in January. This should take approximately two weeks to complete.

MCM has submitted a demolition plan for the concrete flat bridge and it will likely be using a Cat 345 excavator with a 10,000 or 12,000 lb. breaker on it. A nearby recycling center will crush the concrete and convert it into base material. 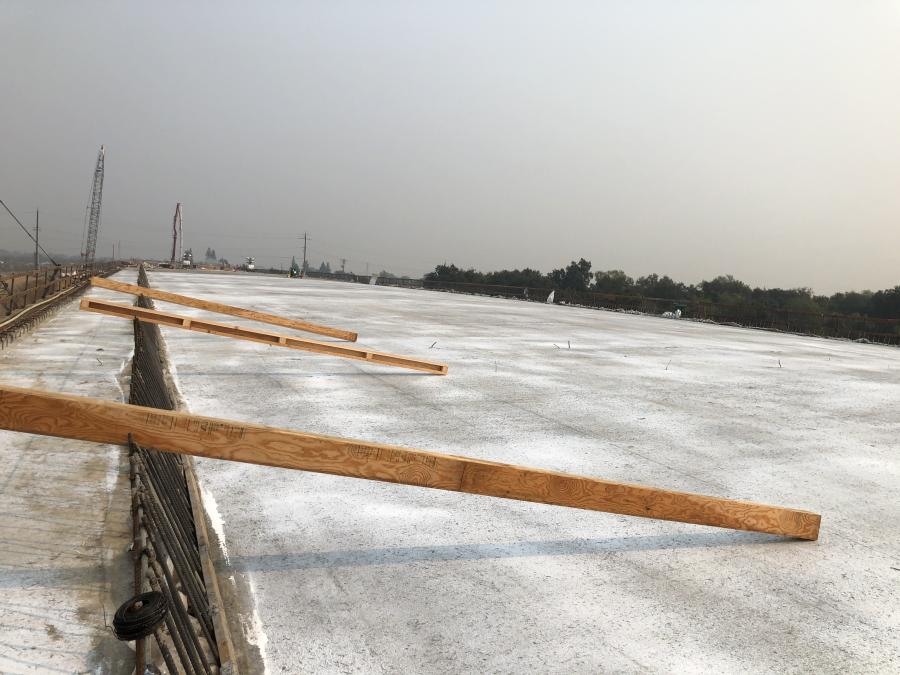 Peak days have had nearly 60 construction workers on-site, including people from local and regional subcontractors.

Traffic management has Caltrans maintaining two lanes for traffic on the old bridge throughout construction.

"Caltrans reduced the speed limit by 10 mph to 45 mph in the construction zone," said Mohtes-Chan. "The speed reduction enhanced safety for workers and motorists in the area."

The work zone, located just outside of Marysville, provides ample space for MCM Construction to bring materials and equipment in and out of the site using access roads leading to SH 70 and local road, as well as set up lay down yards. The area will be re-landscaped after the construction process is completed. CEG