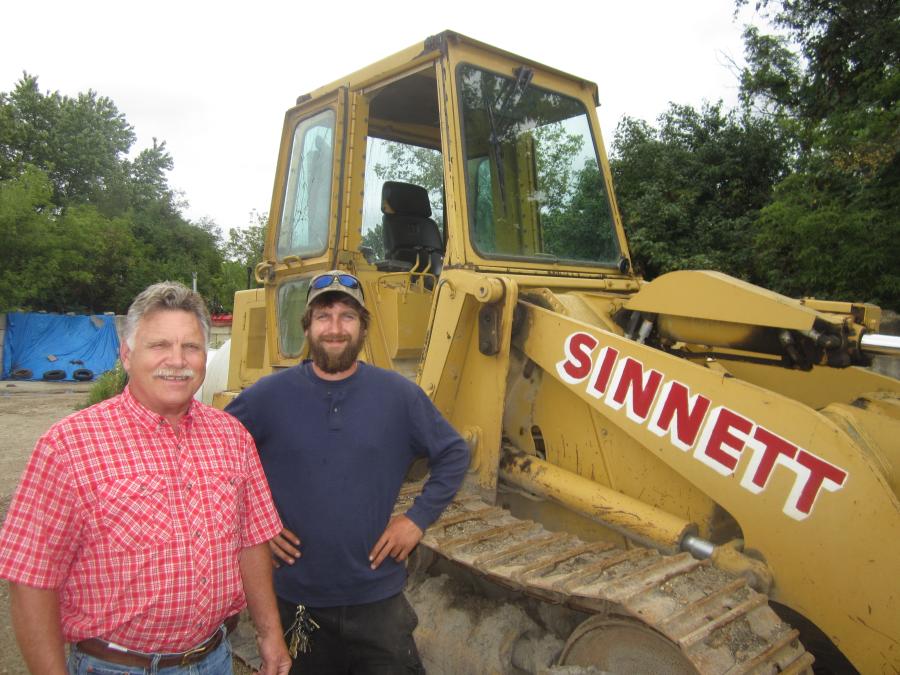 When Scott Sinnett took over his excavating business from his father in 1986, he had already spent 15 years learning the craft of preparing and sculpting raw land for their clients.

By that time, Sinnett Excavating Inc. in Barrington, Ill., was already a 20-year-old company, one that had garnered a strong reputation among northern Illinois homeowners for its professionalism and attention to detail.

The company has always focused its attention on working in the rolling hills around Barrington, located about 30 mi. (48.2 km) northwest of downtown Chicago, and north to the Wisconsin border.

Sinnett's son, Scott II, is being groomed to run the small firm that has been a staple in the growth of both the picturesque village of Barrington and its next-door neighbor Barrington Hills.

Both communities feature many large homes, a number of which had their sites prepared by Sinnett. In addition, the company is famous for its wonderfully artistic landscapes at many local homes.

Sinnett Sr.'s father, Melvin “Bud” Sinnett, started his own business in Barrington with one loader and one backhoe in 1966 after spending several years working for another firm where he gained invaluable experience in the trade.

“When he started it was just a lot of straightforward excavating,” Scott Sinnett Sr. said. “Back in the day, there was a lot of building going on, mostly in Barrington and our shop at that time was on Hager Avenue here in the village.”

The younger Sinnett came on board in the early 1970s when he was only 19 years old, but he eventually convinced his father to upgrade his equipment in order to make the work more efficient.

“As I got older and more into it, I talked Dad into buying an excavator, if you can believe it. We had old rubber-tired backhoes and never had a skid steer all those years. I don't know how we did without it,” he said. “Then we bought another excavator and the work just kept building for us. We had just a few pieces, including a motor grader, too. Now we have about triple the number of pieces he had.”

Although Scott Sr. has worked on some commercial projects over the years, many of which were located in the nearby towns of Cary and Crystal Lake, he mostly tried to stay the course with his residential work.

“The people we were working for were all focused on Barrington Hills so that is where a lot of our focus was,” he said. “We often worked on big mansions where it was nothing to be on a job for eight to 14 months at a time.

“Out here, in the Barrington Hills area, which isn't huge, there is a 5-acre minimum zoning, which means there is plenty of room to work. Plus, we prefer to work in this area and it doesn't make sense to me to travel a hundred miles for a job.”

Instead, Sinnett Excavating has thrived almost completely on repeat local business and work that has come his way via word-of-mouth.

He joked that his only advertising has been the handing out of “lots of free pens.”

Because his company's projects primarily consist of large homes, the owners often want their houses, yards and acreage to blend together and in harmony with the area's gentle hills, farm and pasture land.

And often times, that calls on the artist and naturalist in Sinnett.

He has put in rock and water features at many of the homes he has done, a skill that has given his company a great deal of praise.

An avid outdoorsman himself who spends a lot of time in the northern woods hunting and fishing, Sinnett has studied natural rock formations and how water flows through them in order to use the two elements as property enhancements.

“Well, I guess there is an artist in me and it is a skill I taught myself,” he said. “I have always been intrigued by the natural beauty of the rocks around here — the granite with the different lines and shapes. An old guy I met years ago told me 'Every rock has a face, some even have two.' Some people don't get that, but I can look at a boulder and tell you right away if I am looking at the front or the back. Maybe it has the most features, but there is no way to describe it until you see it.”

Sinnett has experience helping to do site work for a number of equestrian facilities that dot the region. That includes both indoor and outdoor riding arenas, as well as large, 25-stall barns and paddocks.

“We have also done a fair amount of excavation work for lakes and ponds on private land in the countryside; in fact we dug two of them just last winter,” he said.

Road work has never been a huge part of his company's scope, Sinnett said, although they have helped install some small roads, no more than a mile in length, in and around Barrington.

As a result of the work he does, there has never been more than a half-dozen people working at his company.

Sinnett has maintained a good professional relationship with many folks in the area through his full-service company, including that of Patten Industries. The company has been a Caterpillar provider for more than 80 years in northern Illinois.

Sinnett said that most of what he has purchased have been Cat products from the Elmhurst-based dealer, although he has bought other odds and ends from a few other sources.

“My dad had a good relationship with Patten and then when I took over Sinnett Excavating I maintained it,” he said.

As for his son, Scott II, the 27-year-old has spent the last seven years working under his father's tutelage and when the time comes for the younger man to assume the reins of Sinnett Excavating, all indications are that he will be very ably qualified to lead it into another new era.