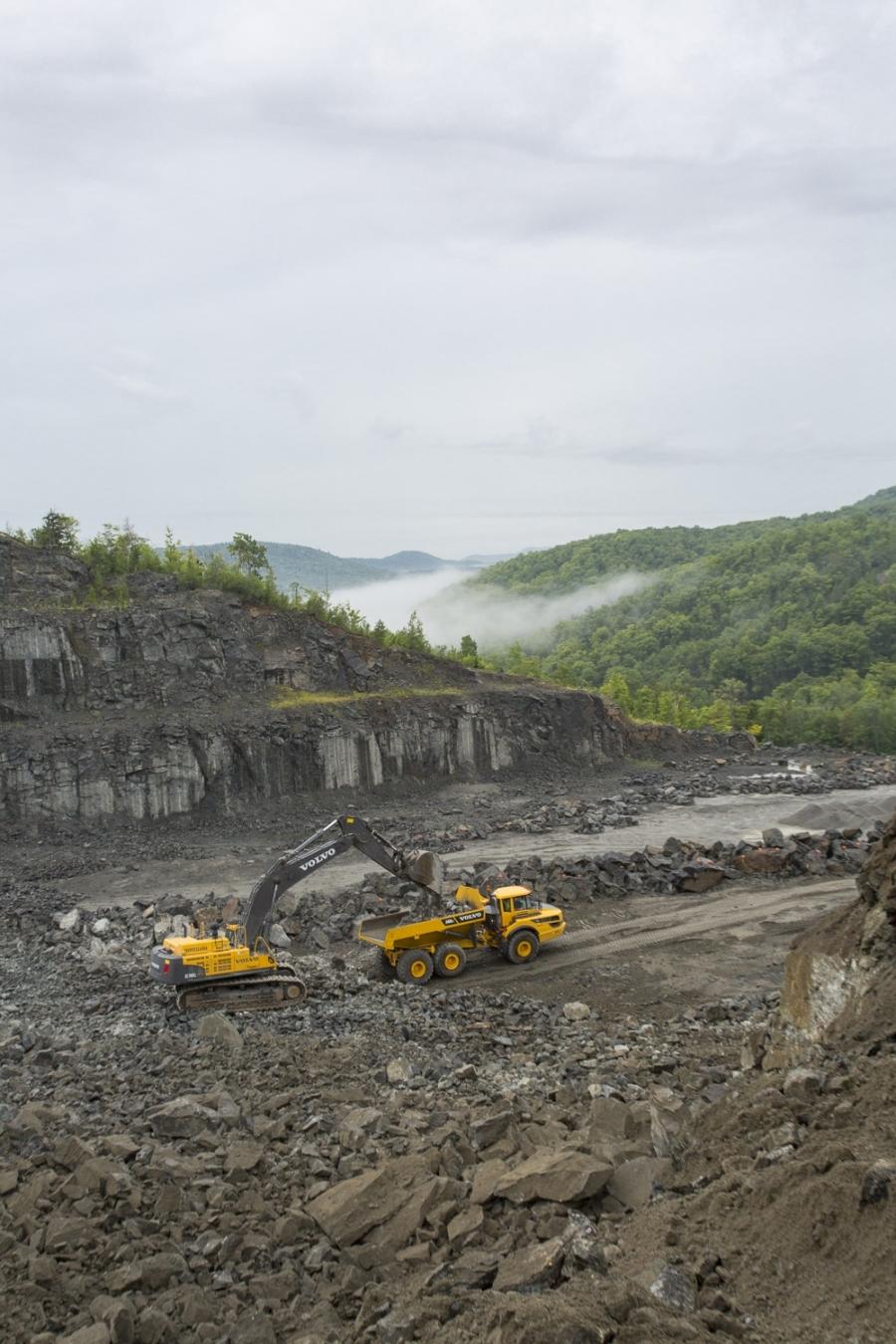 A Volvo excavator and articulated hauler work together on the Barton mine.

Just a few hours' drive north of New York City, the Adirondack Mountains offer a tranquil respite for those looking to escape the hustle and bustle of the Big Apple. The outdoor life is also good for business. Working in the Adirondack Mountains is Barton International, a family-owned business that has produced the world's highest-quality garnet abrasives for more than 130 years.

Established in 1878 by Henry Hudson Barton, the company started out harvesting garnet, a mineral known for its hardness and sharp edges. Barton's fascination with the dark red gemstone first glittered while working at a jewelry store.

At the time, there was a need for a better abrasive for sandpaper. Garnet is a naturally inert sharp crystal with a hardness that falls between 7.5 and 8.5 on the Mohs scale — not far from diamonds, which rank as a 10 — making it the perfect abrasive for woodworking applications.

“My great-great-grandfather reflected on his experience with garnet and soon, he began his career mining and milling garnet for the sandpaper industry,” said Chuck Barton, chief operating officer.

A Jewel of Sandpapers

Barton said his ancestor researched and discovered a good garnet source in the Adirondack Mountains, in New York State.

“He ended up buying an entire mountain,” he added. The original mine operated for 104 years before it was moved to Ruby Mountain in 1982, where the company still operates. Seven generations later, Barton still provides high-quality Adirondack garnet to sandpaper manufacturers for the discerning woodworking craftsman.

Barton said he's grateful to his great-great-grandfather for starting the family business and wants to honor his memory by passing on a thriving company to the next generation. “There's special pride in being part of the business,” Barton saids. “There's also an enormous responsibility to make sure that the business grows as the family grows.”

But mining the mineral has not been without its challenges. In the early years, operations were limited to the warmer months, although collecting and workers on horses, wagons and winter sleighs carried out transporting the ore for processing year-round during the snowy Adirondack winters. Miners worked with picks, shovels and dynamite.

“They used to do hand drilling, load the holes with dynamite, light the fuse — and run,” said Barton.

“Now, it's much more sophisticated. We have 3D models to better understand the deposit and efficiently access the garnet,” added Barton, noting the influence of Volvo Site Simulation on the growth of his fleet and business.

“The simulation was quite complex because it included four different haul roads with different road surfaces, grades, angles, curves and even potholes,” said Yeomans. “We used GPS to accurately capture the haul road information.” Site-specific information, including speed limitations, work schedules, density of the materials were also considered.

“It helped show how we could improve with the new Volvo equipment in today's operating environment, and also where we could go in the future,” Fish said.

The company now operates a fleet of machines from Volvo to excavate, load and transport a much greater volume of garnet ore.

The larger Volvo excavator is equipped with a longer boom, allowing excavating at depths of up to 3.2 ft. (10 m).

“When the rock is blasted, there is oversized material that won't go through the crusher,” explained Jeffery Osborne, territory manager of Vantage Equipment. “We were able to prove that it was easier to sort the oversize with the EC700C and set it aside.”

Joining the excavators is the Volvo A40G full suspension articulated hauler. Given its ability to adapt to the specific rigors of Barton's site, Osborne said Volvo Site Simulation helped him illustrate how Barton could benefit from using Volvo articulated haulers. “It's a much smoother ride,” he added. “It's less stressful on the truck, the drivetrain, and most importantly — the operator.”

The articulated hauler has proven popular among the crew.

“We used to have old rigid frame trucks,” recalled machine operator, Colby Gage. “They had basic suspension and would virtually bounce you out of the seat. The Volvo articulated trucks are smooth and quiet in the cab. They float and adjust themselves as you drive, so you stay in the seat.”

Safety was an important factor in Barton's equipment decision.

“With the Volvo equipment, the safety features have been absolutely outstanding for us,” said Barton. Also, because the company has a strong sense of environmental responsibility, Barton said fuel efficiency and the quality of emissions were paramount. “There's no doubt that those Volvo machines help with our environmental objectives.”

What a Gem of an Idea

“All of these factors rolled up to a decision that, at the end of the day, was actually a little bit easier than we expected,” said Barton. “Volvo's maintenance program, with all its bells and whistles, the financing program and the flexibility there, the safety aspect — the Volvo equipment clearly was the winner.”

Barton still mines and processes garnet for abrasives in the Adirondacks. Over time, the Barton family has developed the business to include new markets, products and applications. The company also produces and distributes garnet for water-jet cutting and blasting media.

Reflecting on the evolution of the company, Barton beams with pride. “I think my great-great-grandfather would marvel at where the business is today and how the markets and technology have evolved. I think he would be quite surprised at what the business has done since he started it 138 years ago.”