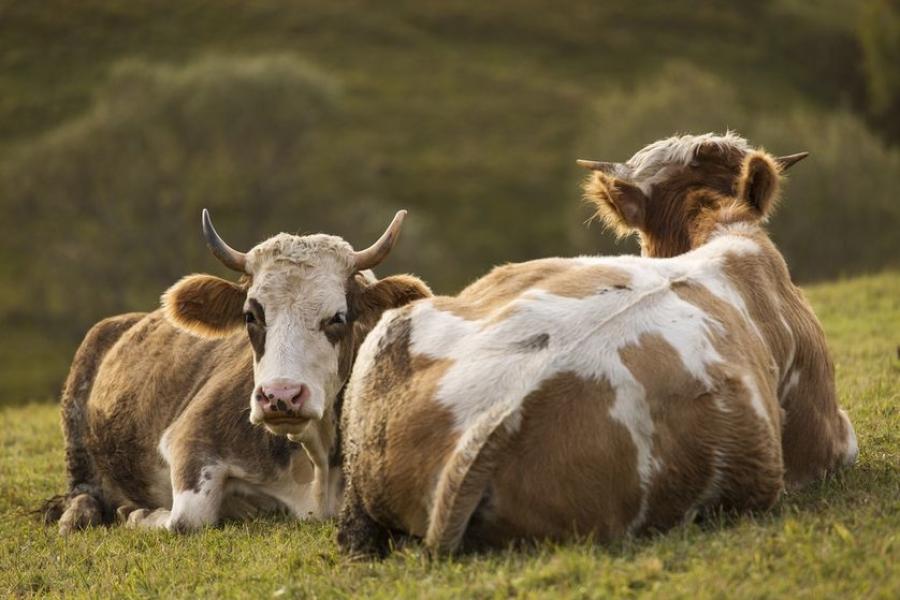 Dairy Herd Management reported the equipment is one of the best ways for farmers to move sick cows from where they are lying to an area better suited for treatment and recovery.

It's no secret skid steers are common for moving all sorts of things on construction sites, but among dairy farmers, they have a unique function.

Dairy Herd Management reported the equipment is one of the best ways for farmers to move sick cows from where they are lying to an area better suited for treatment and recovery.

The challenge, however, is getting the cow into the skid steer's bucket to begin with. Here's how Dairy Herd Management says it can be done:

1. Check to ensure the skid steer's bucket is large enough to fit the cow in question without her limbs hanging out of it.

2. Lower the bucket to the ground and slowly move it close to the cow, but not so close that her skin could get pinched in the equipment.

3. Place a halter on the cow and then, using a quick release knot, tie her head to her back leg on the side that her head is turned toward.

4. Roll the cow into the bucket.

6. Mindfully move the cow to the determined location.

While the process sounds fairly straightforward, it can prove challenging, depending on environmental factors. According to Jim Abacherli, owner and manager of South Slope Dairy in New Mexico, moving a down cow onto a skid steer in a muddy area is difficult and dangerous, both for farmers and for the cow, Progressive Dairyman reported.

“You can send five guys out there, but when it's muddy, they can't get leverage under their feet to roll the cow into a skid steer bucket,” said Abacherli. “The guys are slipping, sliding, falling down – and the cow is kicking.”

To make the process safer, Abacherli modified his equipment. First, he lined the skid steer bucket with rubber and added round piping over sharp edges and corners. The then extended the bottom of the bucket 18 in. to provide more leverage when it was tilted. Finally, he welded angle iron, spaced six inches apart, to hold a hip hoist chain.

“You lower the bucket all the way down so the curve goes over the cow, then take the hip hoist with the short chain and hook it in the notches along the bucket,” Abacherli said. “So then when you back up the loader, you flatten the bucket out and it rolls her over.”

The modified design makes what was once a five-worker job into a streamlined, two-worker process.