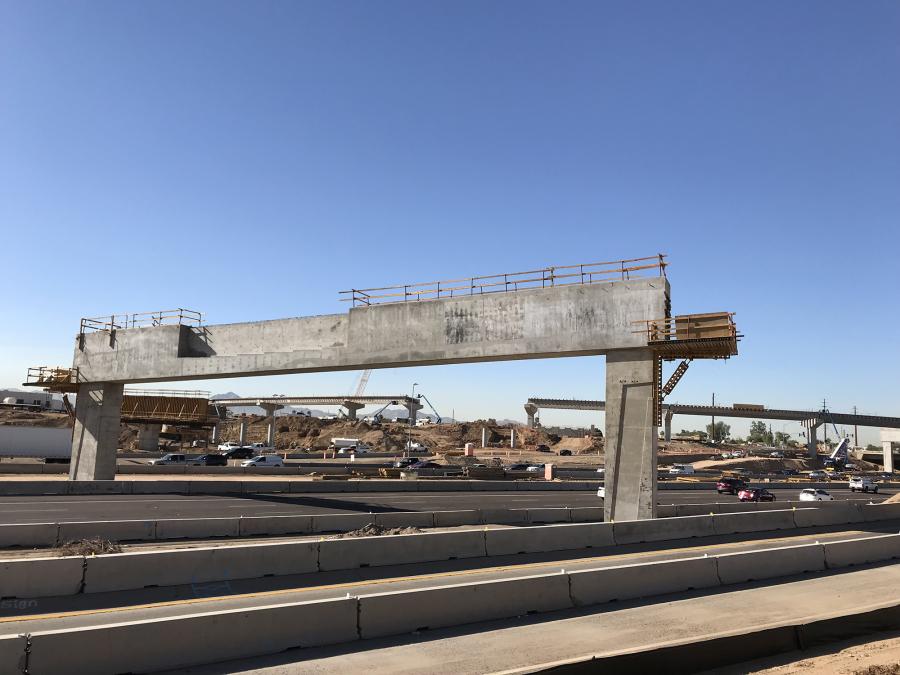 The first girders are in place more than six stories above I-10 for a flyover ramp that will carry South Mountain Freeway traffic to westbound I-10. (ADOT photo)

The skyline is changing almost daily at Interstate 10 and 59th Avenue as an interchange takes shape that will connect with the Loop 202 South Mountain Freeway in west Phoenix.

After work completed recently, motorists now see the first girders, more than six stories above I-10, for a flyover ramp that will carry South Mountain Freeway traffic to westbound I-10.

Two large cranes hoisted and placed the concrete girders, each approximately 150,000 lbs. and up to 165 ft. long, during an overnight closure of eastbound I-10. This 1,565-ft.-long bridge will be the longest of five flyover ramps at the interchange, which will allow seamless travel to and from the 22-mi. South Mountain Freeway.

In September, crews placed 36 girders to support a concrete bridge deck that crews are scheduled to pour late this year.

The interchange also will include roadways parallel to I-10 between 51st and 67th Avenues that will replace direct freeway access to 59th Avenue and improve traffic flow. New auxiliary lanes will feed I-10 traffic to the interchange, and crews also will resurface I-10, create new drainage structures and build retaining and barrier walls.

For a YouTube video of the I-10/Loop 202 interchange construction in west Phoenix, visit: youtu.be/tYtBv6onYZw.