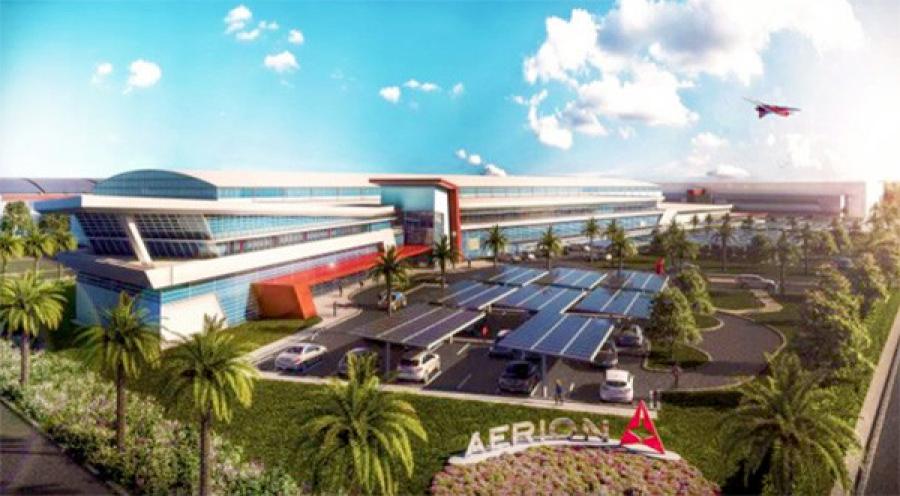 Aerion Supersonic is planning to produce the AS2 supersonic business jet, the world's first, at its proposed "Aerion Park" manufacturing plant located at Orlando Melbourne International Airport (MLB). More than 60 acres of vacant airport property at the northwest corner of the field will be the site of the new facility.

According to Space Florida, construction is expected to begin on Aerion Park before the end of this year.

Aerion is prepared to reshape the general aviation industry with the AS2 — the first privately built supersonic commercial aircraft ever and one that is designed to reach speeds of over 1,000 mph with the ability to accept 100 percent biofuels.

The 12-passenger aircraft aims for Mach 1.6 with a supersonic natural laminar flow wing for a minimum projected range of 4,750 mi.

"We are incredibly honored and thrilled to bring this news to our community at a time when it's needed the most," said Greg Donovan, executive director at Orlando Melbourne International Airport. "We are proud to be the location of the future where Aerion will innovate, create and introduce new technologies and products to the aviation industry worldwide."

Aerion, an industry leader in supersonic travel, is pioneering a new generation of high-speed mobility solutions that significantly reduce the time and friction of travel while leaving no carbon footprint behind, said Tom Vice, Aerion Supersonic chairman, president and CEO.

"Our AS2 business jet — the world's first privately built supersonic aircraft — is the first stage in that exciting endeavor," he explained. "Having evaluated a number of potential locations for our new home, we are excited to partner with Florida and the Melbourne community to create a sustainable supersonic future."

The decision to launch the assembly of the AS2 at MLB, located just south of Cape Canaveral and the Kennedy Space Center, will allow Aerion to tap into the highly-skilled local workforce as well as attract some of the best aerospace talents in the world to Melbourne, according to the company.

The Melbourne area is already widely recognized on the global stage as an epicenter for aviation, aerospace and defense. Brevard County is home to Northrop Grumman, L3Harris, Embraer, Collins Aerospace, Thales and now Aerion Supersonic.

Airport officials have worked to recruit Aerion to Florida since December 2018 through a collaboration of several economic partners, including the Economic Development Commission (EDC) of Florida's Space Coast, Enterprise Florida Inc., Space Florida and the City of Melbourne.

Its airfield has been completely upgraded over the last few years with three rehabilitated runways and a new air traffic control tower.

Other upgrades to MLB also are set to happen following the recent announcement that British-based TUI Airways, the United Kingdom's leading holiday travel conglomerate, has inked a seven-year contract to fly Boeing 787 Dreamliners from nine cities in England and Scotland to MLB in 2022.

Plans are under way to invest an estimated $30 million into renovating MLB's aging terminal to handle an estimated 156,000 new trans-Atlantic passengers per year.

When the improvements to MLB are complete and TIU Airways begins operations at the airport in the spring of 2022, Orlando Melbourne International Airport will start serving more United Kingdom cities than every airport in the United States except JFK International in New York.