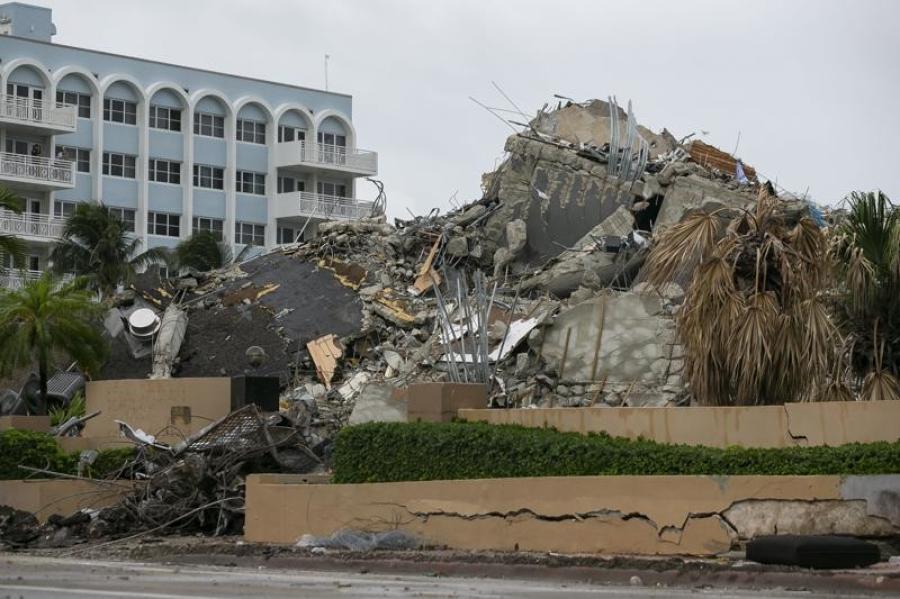 Rubble and debris of the Champlain Towers South condo can be seen Tuesday, July 6, 2021 in Surfside, Fla. (Carl Juste/Miami Herald via AP)

With the demolition of what was left of the Surfside, Fla., Champlain Towers South condominium building after its partial collapse June 24, search and rescue efforts at the site have resumed with ever more urgency.

The likelihood of finding survivors under the rubble continues to diminish with each passing hour 12 days after the disaster occurred, and Tropical Storm Elsa, though not likely to hit the site head on, threatens to challenge crews with downpours and possible tornadoes.

At a morning news conference on July 6, Miami-Dade Mayor Daniella Levine Cava said that another four bodies were recovered from the condo collapse in Surfside. The death toll now stands at 90.

"Active search and rescue continued throughout the night, and these teams continue through extremely adverse and challenging conditions," Cava remarked to reporters.

The AP reported that power saws and backhoes could be heard as workers in yellow helmets and blue jumpsuits searched the rubble. All the while, gray clouds from Elsa's outer bands swirled above.

The storm's worst weather was expected to bypass Surfside and neighboring Miami as Elsa strengthened before making landfall somewhere on Florida's west coast south of Tampa Bay and continuing into the northern part of the state.

Officials noted that search crews can work through rain, but lightning from unrelated thunderstorms is much more hazardous to rescuers and to contractors brought to the site to remove the building's debris.

"We're actively searching as aggressively as we can," Miami-Dade Fire Chief Alan Cominsky said at the news briefing.

As search crews have pulled more bodies from the wreckage, they have detected no new signs of survivors, he added.

"We are not seeing anything positive," Cominsky explained.

Workers have been freed to search a broader area since the unstable remaining portion of the condo building was demolished amid fears that the structure could fall without warning, according to an AP news report. Officials said the demolition gave rescuers access to previously inaccessible places, including bedrooms where people were believed to be sleeping at the time of the disaster.

Hoping to bring answers to the families of the missing, rescue teams have been working endlessly to break through 13 to 16 ft. of the concrete that came crashing down as many residents slept June 24.

The recovery operations were halted early July 1, one week after the building's unexplained failure, after engineers saw signs that the remaining portion of the structure could crumble and fall onto rescuers and accident investigators.

CNN reported later that day that a large column was found to be "swaying six to 12 inches" that could damage a super column in the garage. On top of that, officials said that "a concrete slab on the south side of the tower was moving" along with a pile of rubble.

As a result, authorities quickly cleared people from the area around the rescue operation.

Florida Gov. Ron DeSantis said that state engineers were helping Miami-Dade Fire Rescue get "different options on how to handle this."

Shortly thereafter, the decision was made by local and state officials to demolish the rest of the condo building.

The state hired the BG Group, a general contractor based in Delray Beach, Fla., to lead the demolition, which in turn subcontracted the job with Phoenix, Md.-based Controlled Demolition Inc. (CDI), to perform the razing of the condo building, according to the AP. CDI is among only a handful of companies in the United States that demolishes structures using explosives.

The company placed charges on the basement and lobby levels of the still-standing structure to implode it within a tight pile, the AP reported. To cause the building to fall into itself, the charges are set off in rapid succession over a matter of seconds, said Scott Homrich, who heads the National Demolition Association and runs his own demolition company in Detroit, Mich. Setting the explosives off at intervals serves to break up the building at the same time it is coming down.

Another uncertainty that factored into the choice to demolish the condo building was the approach of Elsa. The fear was that if the tropical storm hit Surfside, it could bring down the rest of the structure onto the already existing rubble — or those working on it — with little to no warning or control.

Instead, Mayor Cava said that crews were able to execute the demolition "exactly as planned."

"Only dust landed on the existing pile," she said.

Now, with the building completely torn down, recovery efforts and debris removal are much safer, officials said.

Officials also credited the demolition with the ease and speed with which crews are operating at the pile of rubble.

Florida Gov. Ron DeSantis told CNN that teams on the ground are making "a lot of progress" and that while the demolition decision was not made by his office, he thought it was the "right thing to do" to help everyone move forward.

After almost two weeks, the cause of the collapse of the 12-story Champlain Towers South building is still unknown.

Investigators continue searching for answers as to what triggered the failure after a 2018 report raised concerns about structural damage to the condominium.

Maryland-based Morabito Consultants performed a structural analysis as part of Champlain Towers South's 40-year recertification effort. The AP noted that the structural field survey highlighted "abundant cracking and spalling" in concrete columns and walls, "exposed, deteriorating rebar" and failing waterproofing beneath the pool deck and entrance drive that was causing "major structural damage" to the concrete structural slab. The study also warned of rapid deterioration if it was not promptly replaced.

The condo's collapse also has raised questions about whether other residential structures could be at risk in Miami-Dade County, where sea levels are rising, the salty air is corrosive and nearly two-thirds of all commercial, condo and apartment buildings are as old or older than the 40-year-old building that fell, according to a CNN analysis of county records.

The news network reported that officials have focused their concerns on the destroyed condo's sister building, Champlain Towers North, which was built around the same time using the same developer and likely the same materials as the structure that collapsed.

The AP reported that more federal investigators have arrived at the South Florida accident scene to determine why the building fell. Cava said the National Institute of Standards and Technology (NIST), the U.S. Geological Survey and the National Science Foundation are each sending staff to the site.

"NIST, our federal partner, continues to work closely with the structural specialists, with detectives, and the fire rescue crews on site, as the evidence gathering process is well under way," she said. "They're capturing all possible insights from the debris and all evidence is being properly tagged and logged."

Given the "rough terrain of the pile," LIDAR scanners are working to help investigators "better analyze the debris," Cava told reporters. "All this evidence will be critical to the NIST's eventual fact-finding report."

Despite increasingly slim odds, CNN said officials are still holding out hope of finding people alive in the rubble.

"There's no giving up hope," Burkett said. "I think we're all unified on that. We owe it to the families. We have a duty, unlimited resources – we're going to make sure everybody gets out."

Correction: An earlier version of this story gave the wrong title for Daniella Levine Cava. She is the mayor of Miami-Dade.