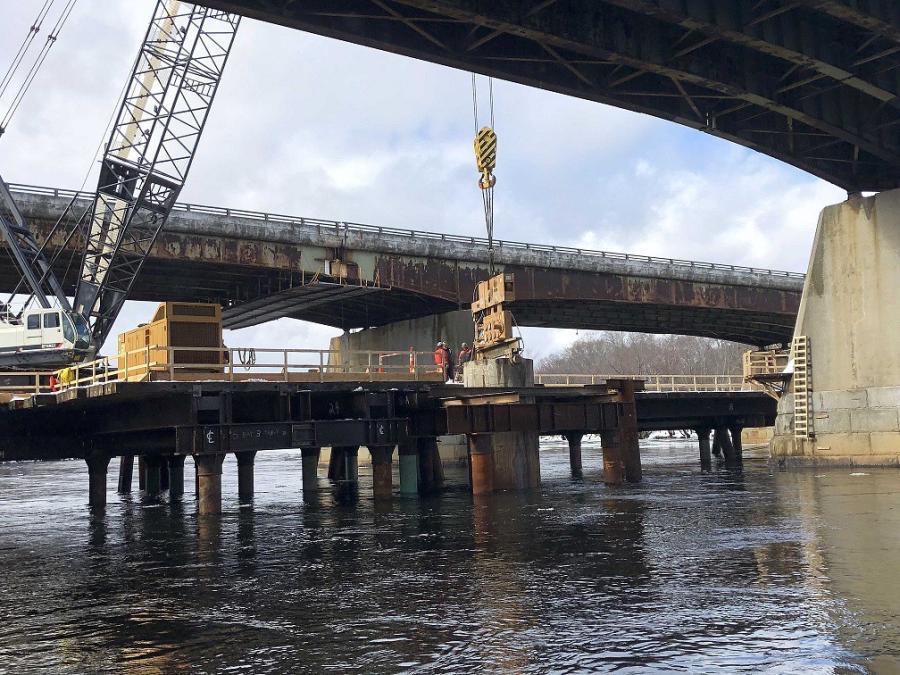 Both bridges, with an expected design life of 75 years, will be open to traffic in October 2021.

The old bridges, built in 1961 — 712 ft. long, three lanes in each direction and shoulders on either side — are being replaced to address structural and functional deficiencies. The design-build project, funded by federal (80 percent) and state (20 percent) dollars, began in August 2018 and will be fully delivered in June 2022.

The work zone extends from approximately Exit 48 south to Exit 49 north of the bridges. The new bridges will be 718 ft. long. 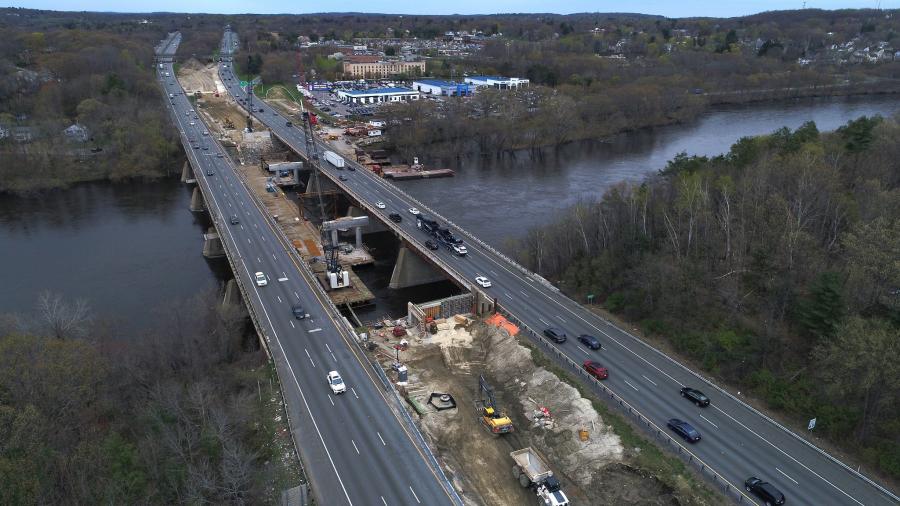 Both bridges, with an expected design life of 75 years, will be open to traffic in October 2021.

"The bridges were in disrepair and had reached the end of their lifespan requiring frequent repairs " said Kristen Pennucci, MassDOT's communications director. "The new bridges will eliminate need for constant emergency repair work, improve roadway safety, provide motorists with full-width breakdown lanes, create a dedicated exit lane for northbound exit 49, modify the existing alignments and increase the width for the acceleration lanes. Planning for the project began in 2012. The need was obvious to anyone traveling the highway and it has support from local and state elected officials and the public."

A key piece of equipment for the construction has been a 275-ton crawler crane placed on the trestle and flexifloat platform in the water.

"The crane has serviced all aspects of construction, including drilled shafts, demolition and structural steel erection," said Pennucci. 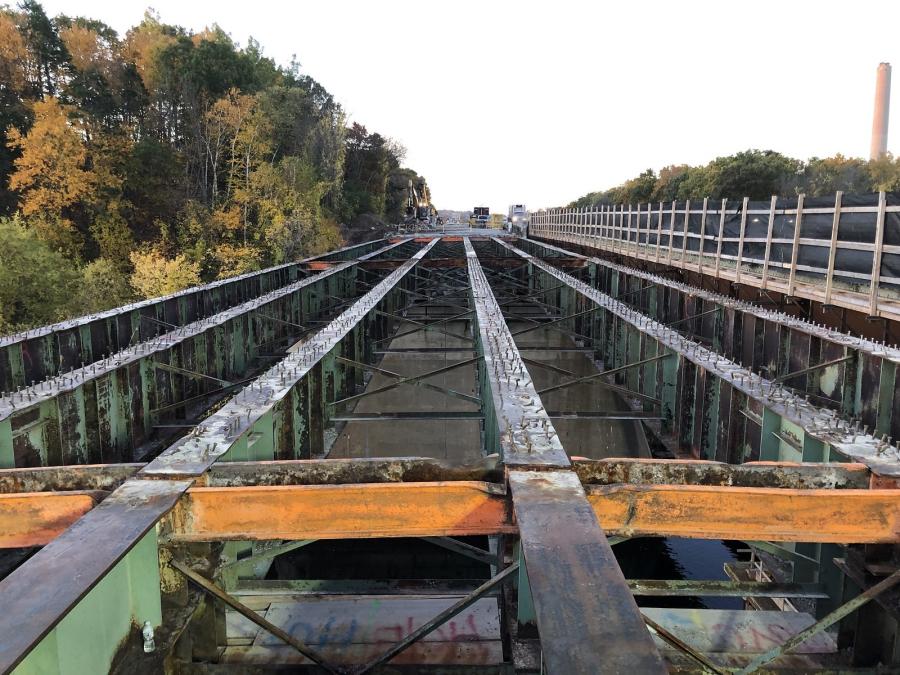 HNTB, the lead designer, designed the new bridges and roadwork to accommodate the phased construction plan. The bridges are going from five to three spans, which reduce future maintenance costs.

"With all of our bridges, the long-term durability of joints in bridge deck is a constant concern," said Pennucci. "These joints are where the bridge tends to degrade first, which can lead to the need for frequent maintenance. The new bridge features a continuous deck, eliminating the need for intermittent bridge joints. This should increase the longevity of the structure, reduce maintenance costs and improve the ride quality."

Green International Affiliates Inc. was responsible for the survey, drainage and structural design.

To protect the Shortnose and Atlantic sturgeon, work restrictions have been put in place to protect the fish during the spawning period and before they migrate out of the river. In-water work is restricted each year to a small window from November to February.

SPS New England crews are currently building the eastern half of the new northbound bridge. Prior to the replacement, the bridges carried 115,000 vehicles daily and the new ones will carry 127,000 per day.

"The substructure work is complete, and the contractor recently completed erection of the Phase 2 structural steel," said Pennucci. "Work over the summer will focus on the superstructure of the bridge, which includes forming and placing the bridge deck and barrier along with building the new roadway approaches to the bridge structure. Ongoing median work includes the pier protection barrier for the River Street and Industrial Avenue overpasses. Phase 2 work will continue throughout the summer."

The project is not without its challenges. 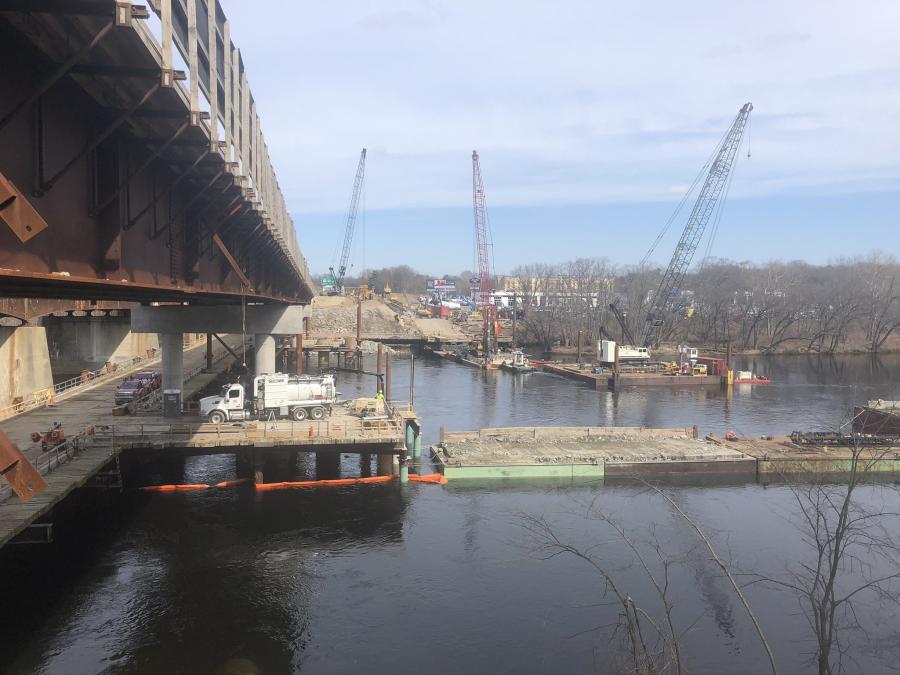 "Working over the river with tidal and seasonal flow variations along with tight in water work windows are among the challenges," said Jacqueline Goddard, MassDOT's assistant secretary of marketing and communications. "Currently crews are only working during the day. Depending on the operation, crews have and will continue to work nights and weekends to maintain schedule and to facilitate lane closures for operations such as beam erection and paving. Access to the work zone has been difficult. However, the staging area at Bank Road combined with the trestle system has been very useful, aiding in access to the work area."

There are existing sewer lines on either side of the bridge.

Safety briefings are held each morning to coordinate operations between trades and various subcontractors.

"In addition to daily safety meetings," said Goddard, "tool-box talks are held regularly to discuss typical safety challenges on site as well as frequent ‘man-overboard' drills simulating the safety protocols and response should a worker fall into the water."

The northbound bridge will be completed in October 2020. 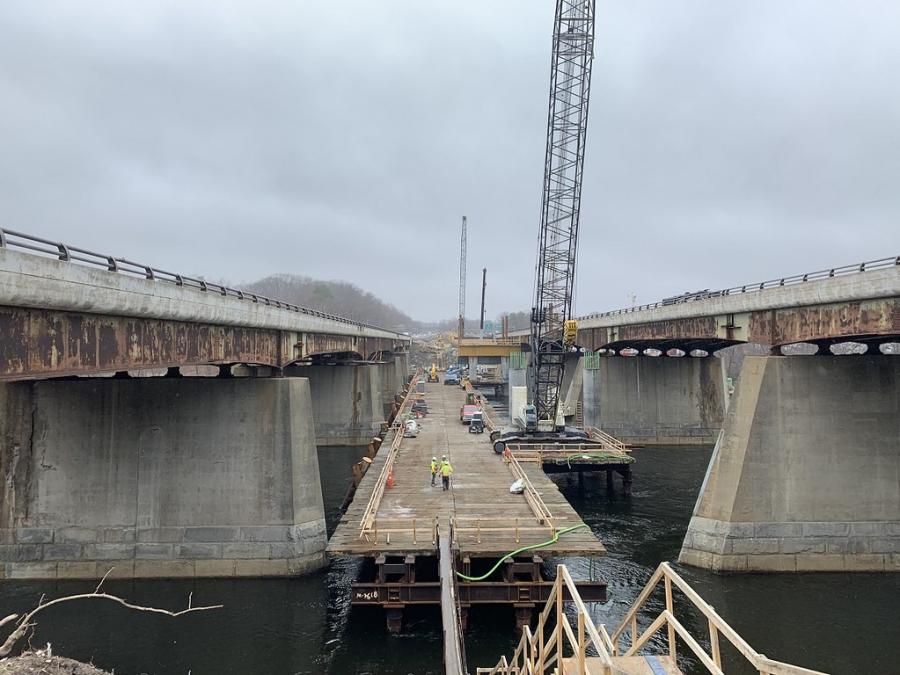 The demolition of the old northbound bridge began October 2019

"The poor condition of the existing bridge required the use of the small excavators to demolish the existing deck," said Goddard. "The short window for in-water work proved challenging to complete substructure demolition. The underside of the existing deck was shielded to prevent debris from falling into the river."

The demolition debris that can be accessed during normal business hours is direct loaded whenever possible.

"For night work or areas with limited access due to lane closures, debris was stockpiled outside the limits of the bridge and loaded out when access was available," said Goddard.

The barges, ranging from large to smaller sizes, are capable of handling large cranes and many construction workers, as well as building materials and materials removed during the demolition and construction phases. Tugs allow for the barges to be moved to various locations and be connected to create larger work platforms.

Temporary navigational lighting to USCG standards has been installed to support the efforts on the water.

The road work, safety improvement, drainage work and other ancillary elements are proceeding as scheduled. A large section of the median was converted into a staging area to store building materials and bring equipment in and out.

"Everything is on schedule," said Pennucci. 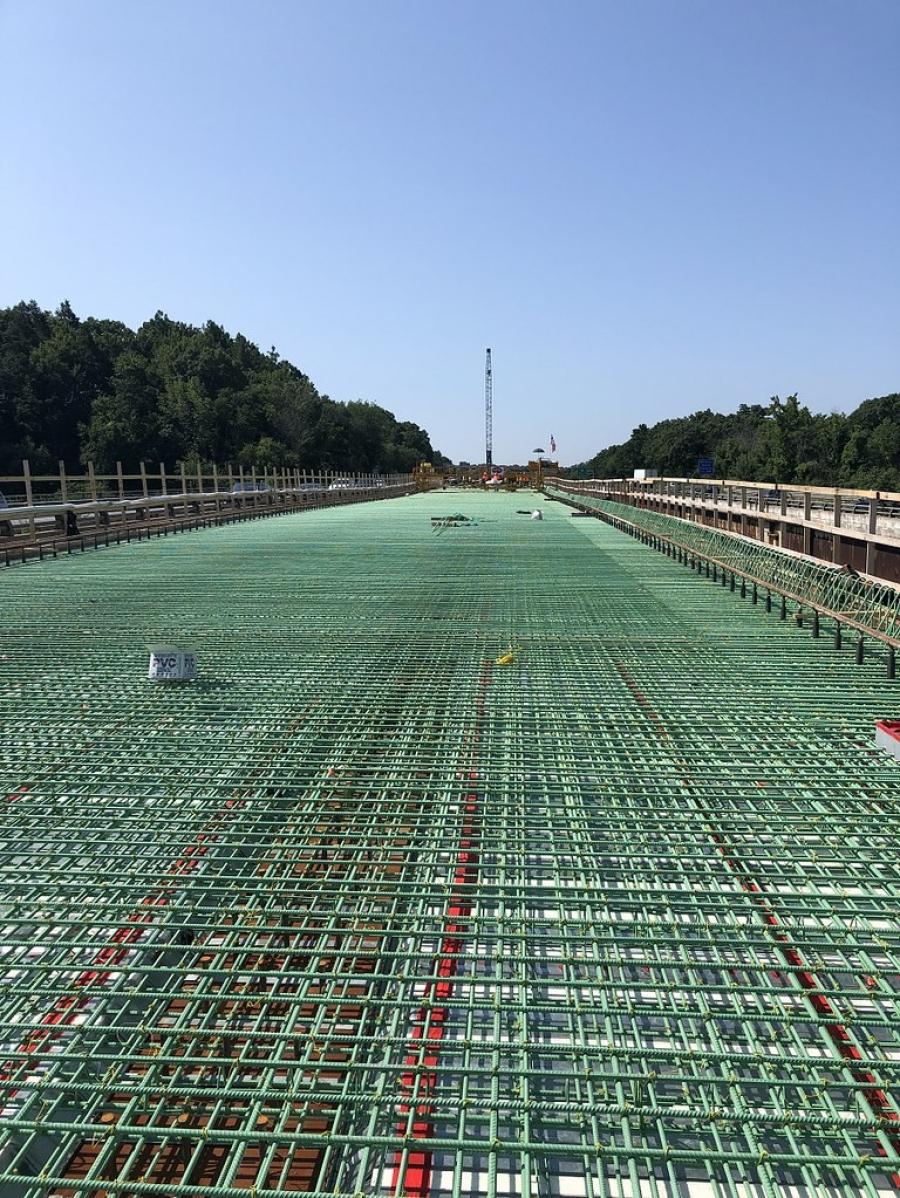 The amounts of concrete and steel to be generated by the demolition of the old bridges is still being tabulated. The excavation work should generate 160,000 cu. yds. of earth and 35,000 tons of pavement.

"Existing pavement was reclaimed on site and mixed with existing soils to develop a roadway subbase material," said Goddard. "Concrete from demolition activities was shipped off site to a local recycling facility where the rubble was crushed and turned into a recycled concrete gravel borrow like material."

The firm purchases and rents equipment from local and regional dealerships. CEG