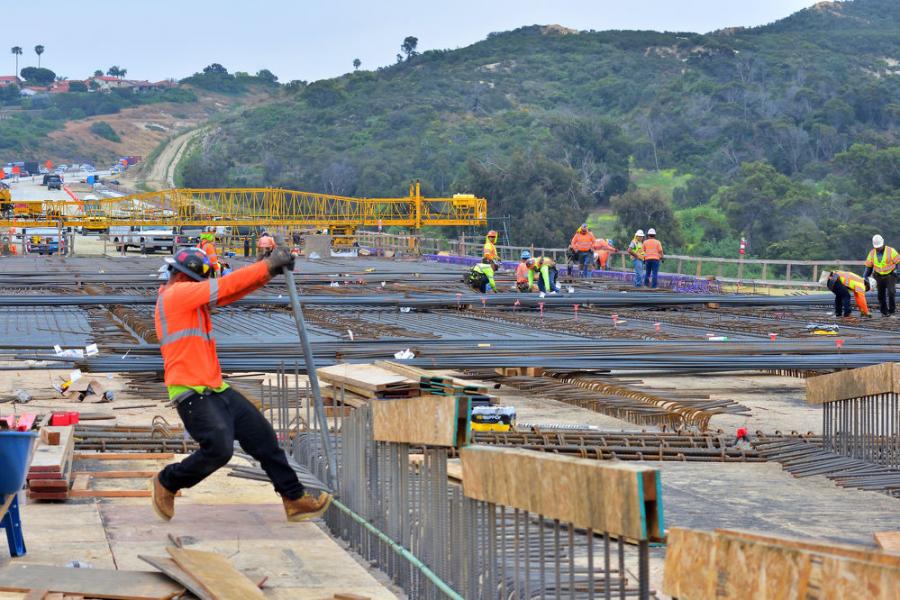 In February 2020, Build NCC construction crews reached the halfway point of the project and successfully shifted traffic to the I-5 San Elijo Lagoon highway bridge in Encinitas.

Foundation, column and bridge superstructure construction is under way at the Interstate 5 (I-5) San Elijo Lagoon highway bridge located above Manchester Avenue and a lagoon channel separating the central and east basins of the 960-acre San Elijo Lagoon coastal wetland in Encinitas, Calif., a city along the northern San Diego County coastline.

The bridge is being built by the joint venture of Flatiron, Skanska, and Stacy and Witbeck (FSSW), which is responsible for the Build North Coast Corridor (NCC) construction, as well as other nearby multimodal and active transportation projects.

The project is part of the first phase of construction of the Caltrans and the San Diego Association of Governments (SANDAG) North Coast Corridor Program. The $6 billion, 40-year vision is an implementation blueprint for developing and building projects as part of a holistic and connected system of mobility facilities.

The JV has been making steady and solid progress on construction.

In February 2020, Build NCC construction crews reached the halfway point of the project and successfully shifted traffic to the I-5 San Elijo Lagoon highway bridge in Encinitas. Motorists were diverted onto two new highway bridges, creating a slight curve in both northbound and southbound directions, providing space for crews to rebuild the inside portion of the highway bridge above Manchester Avenue and the San Elijo Lagoon. 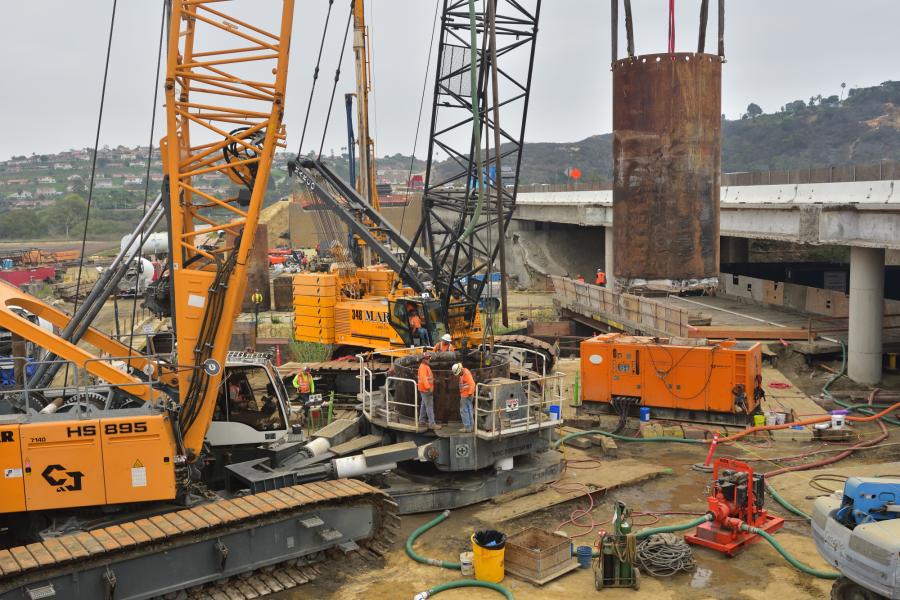 One month later, in March 2020, crews demolished and dismantled the original, 57-year-old northbound and southbound I-5 highway bridge structures. An estimated 4,000 cu. yds. of concrete from the old bridges was recycled into roadway base material and reused within the Build NCC project.

A total of 750,000 lbs. of original steel from the bridge – or the weight of 62 elephants – was also separated and recycled. Through spring, summer and fall, crews focused their efforts on forming the underground foundation for the new interior portion of the bridge, performing the final concrete pour in December 2020.

The JV is dealing with several construction challenges, which were identified and addressed during the design phase.

"One project challenge we overcame was how best to ensure structural stability and integrity when pouring and forming below-ground bridge piles within the lagoon's marine environment," said Adrian Cortez, Caltrans senior bridge engineer. "Through our construction manager general contractor project model, we were able to develop a solution together with our joint-venture contractor."

To construct the bridge foundation, crews installed welded steel casings and excavated sediment to form cast-in-drilled-hole (CIDH) underground concrete bridge piles, or columns. Build NCC crews used a hydraulic oscillator to rotate the steel casings in a circular motion back and forth into the ground as opposed to a standard heavy-duty pile driving operation. 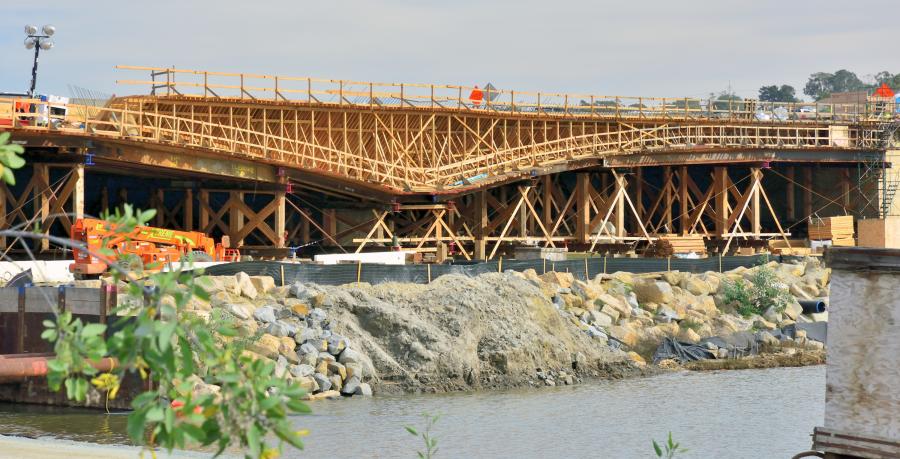 The project's efforts align with SANDAG's vision for the 2021 Regional Plan, which reimagines how people and goods could move throughout the region in the 21st century, fundamentally shaped by five key strategies for mobility, collectively known as the 5 Big Moves — Complete Corridors (multimodal roads), Transit Leap (fast and flexible transit), Mobility Hubs (connection points), Flexible Fleets (first and last mile options) and the Next OS (enabling technology). 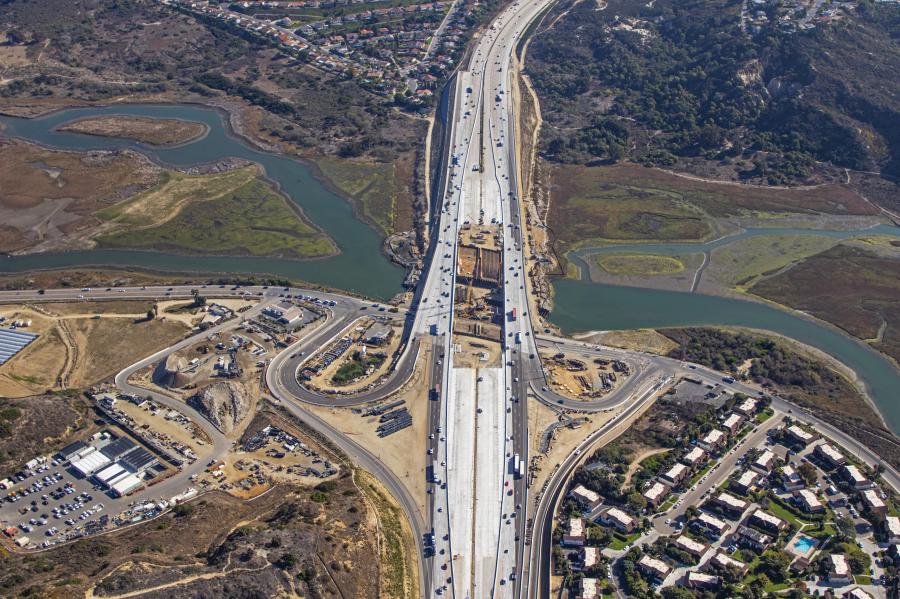 The Complete Corridor model provides an integrated system of multimodal transportation options that will help improve the quality of life for residents, create a stronger local and regional economy for the future, and enhance the coastal environment along the I-5 corridor.

The Build NCC program began in 2017 and is anticipated to be complete in 2022. The $869 million project is funded through a combination of federal, state, and local sources, including the TransNet program, a voter-approved half-cent countywide sales tax administered by SANDAG that helps fund regional transportation projects. The highway portion of Build NCC is estimated to cost $663 million.

San Elijo Lagoon highway bridge construction broke ground in spring 2017 and is anticipated to be completed in late 2021. Once complete, the reconstructed bridge will improve San Elijo Lagoon tidal flows and feature one new carpool/HOV Lane in each direction on I-5 and a new suspended bicycle and pedestrian bridge below, connecting Manchester Avenue to the lagoon trail network. The bridge, first constructed and opened to motorists in 1963, is being lengthened and widened to its ultimate configuration, which will eventually accommodate two carpool/HOV lanes in each direction as part the second phase of the NCC program in 2035. CEG