Voters will decide April 4 whether to designate $60 million from an existing business use tax for the construction of a 22,000-seat soccer stadium in downtown St. Louis. 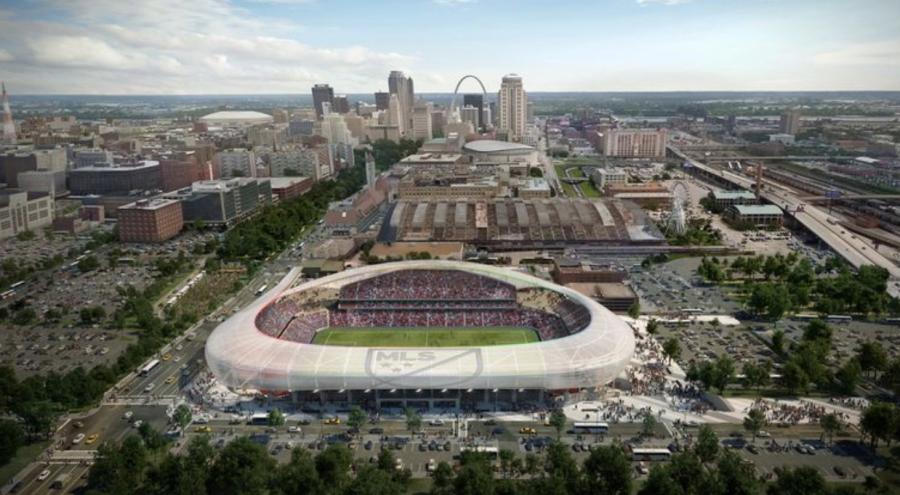 After choosing Los Angeles over St. Louis, the NFL Rams moved on but the idea of a new sports complex has not.

A year after the NFL's Rams abandoned St. Louis for Los Angeles, the city has a chance to again become a three-sport town if voters agree to help pay for a stadium for a new Major League Soccer franchise.

Voters will decide April 4 whether to designate $60 million from an existing business use tax for the construction of a 22,000-seat soccer stadium in downtown St. Louis. The ownership group SC STL would invest $95 million in the project and cover the league's $150 million expansion fee, and they have asked the state to donate 24 acres of unused land.

The league is expected to announce two new expansion teams in the fall that would begin play in 2020. St. Louis would be a favorite among the 12 applicants if the stadium funding is approved.

At a rally in St. Louis on Monday, MLS Commissioner Don Garber talked about the city's historical ties to the world's most popular sport. The region has long been a hotbed for youth and collegiate soccer, and many members of the 1950 U.S. World Cup team that beat England 1-0 in one of the sports' biggest upsets were from The Hill area of St. Louis. St. Louis University won 10 NCAA men's soccer championships from the 1950s through the 1970s.

Garber said the departure of the NFL's Rams to Los Angeles was a blow to St. Louis, but it helped open the door to an MLS team.

"Where there was a void left by the Rams leaving, it clearly put more energy behind this," he said.

But Garber made it clear that the project rests with voters.

"Without that vote being positive, this project's not going forward," he said.

SC STL chairman Paul Edgerley said soccer is a good fit for the growing number of young people working in the St. Louis area's burgeoning tech industry. An MLS team would add to "this positive momentum in the community that St. Louis has already started," he said.

There is plenty of opposition to the proposal, too. St. Louis' schools and police force are underfunded and its streets and infrastructure are in disrepair, and many city leaders believe it would be wrong to spend money on a stadium when basic needs aren't being met.

"These types of deals are never good economic development strategies for cities," said Alderwoman Megan Green, one of many members of the board of aldermen who oppose the ballot measure.

St. Louis, she said, has "much greater needs than a soccer stadium."

The city's biggest newspaper, the St. Louis Post-Dispatch, also opposes the use of public funds to pay for a stadium. In a recent editorial, it wrote that a city of 311,000 with a 90,000 people living at or below the federal poverty line "can't carry the burden of a sports facility that would benefit surrounding county residents who aren't being asked to pay their fair share."

It took months of negotiations before aldermen agreed to put the measure up for a vote. Funding would come from a half-cent increase in a use tax on out-of-town purchases by St. Louis businesses. Residential taxes would be unaffected.

Public funding for stadiums has increasingly become a difficult sell in many places. Still, St. Louis aldermen agreed in late 2015 to provide up to $400 million toward a $1 billion stadium for the Rams. The NFL said the project and the funding were inadequate. League owners in January 2016 approved Rams owner Stan Kroenke's request to move.