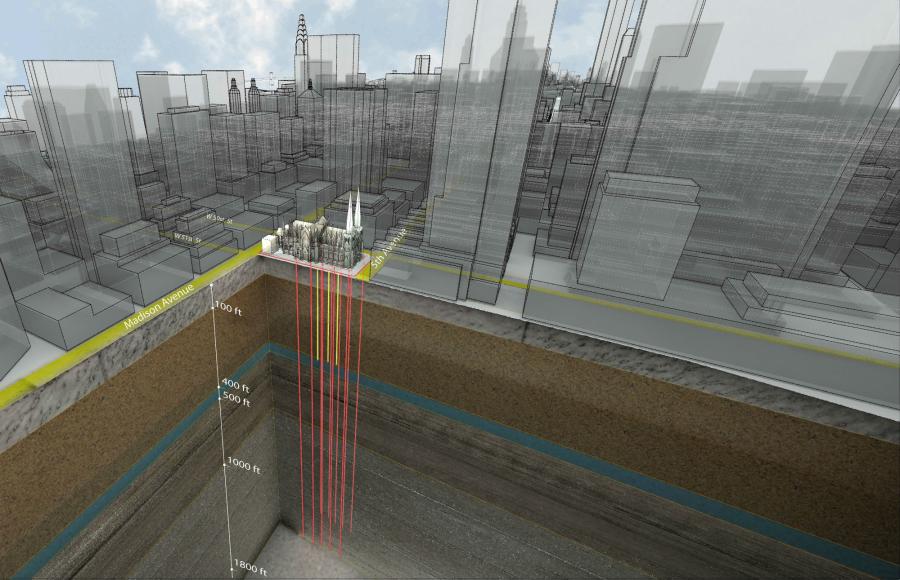 With the luck of the Irish, St. Patrick's Cathedral has activated their new geothermal plant just in time for St. Patrick's Day. The state-of-the-art system will use thermal energy harvested from underground wells to regulate the temperature of the Cathedral and its neighboring buildings.

In order to harness enough energy to do this, ten wells were drilled to 2,200 feet on the north and south edges of the Fifth Avenue cathedral along 50th and 51st Streets. Those wells distribute heat to a Dedicated Heat Recovery Chiller, which then sends it out to the 76,000 square feet of cathedral for heating or cooling.

Unlike most geothermal systems, St. Patrick's system is able to heat and cool different spaces around the property simultaneously. According to a press release, a fully functioning system will be able to produce 2.9 million BTU's of air conditioning per hour and 3.2 million BTU's of heat per hour.

To utilize the geothermal power for the project, engineers and designers had to manipulate the existing infrastructure while still adhering to strict historic preservation codes. The design and construction team included Murphy, Burnham, & Buttrick, Landmark Facilities Group, PW Grossner, Silman, and Langan Engineering, and Structure Tone of New York.

“We conducted a feasibility study and found that a geothermal system let us meet our goals with the smallest impact,” said Richard A. Sileo, senior engineer with Landmark Facilities Group, in a press release. It was also noted in the press release that the Archdiocese of New York and St. Patrick's Cathedral also hoped that choosing a sustainably responsible choice for energy, that the project could inspire others around the world to do the same.

“A consistent ethic of life does not compartmentalize these issues. It prioritizes life and the preservation of life at every level,” said cathedral Rector Monsignor Robert T. Richie in a press release. “One of the most basic ways in which we are called to do so is through responsible stewardship of our natural resources.”

The geothermal plant was completed February 2017 and is part of a larger restoration effort for the cathedral.