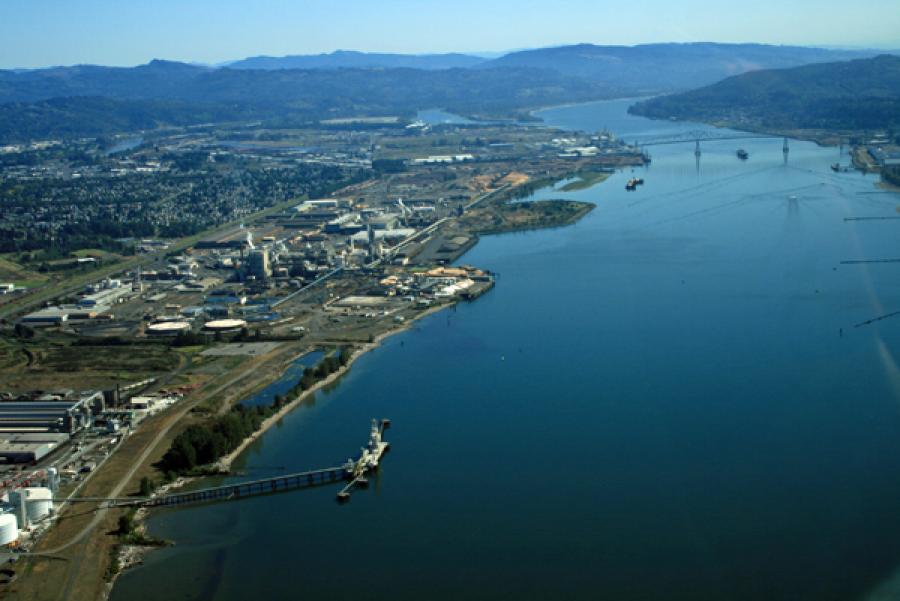 Washington's outgoing public lands commissioner said he is refusing to allow the state's aquatic lands to be used for a major coal-export terminal along the Columbia River. But the company behind the proposal insisted the decision would have no effect on its plans.

Millennium Bulk Terminals proposed building a terminal in Longview that would handle up to 48.5 million tons (44 million t) of coal a year. The coal would arrive by train from Montana, Wyoming and other states to be stored and loaded on ships for export to Asia.

Outgoing Commissioner Peter Goldmark announced that he has rejected a request from Northwest Alloys — originally made in 2010 — to sublease the state's aquatic lands to Millennium Bulk Terminals for the project, which is on the site of a former aluminum smelter. His successor, Hilary Franz, has repeatedly said she opposes leasing state lands for fossil fuel projects.

Environmentalists greeted the decision with joy — one called it the “final nail in the coffin”' for the project as proposed. But in an emailed statement, Bill Chapman, Millennium Bulk Terminals chief executive, cited a May 2013 letter from the state's Department of Natural Resources as evidence that the state had already recognized the company “as the operator of the port facility.” He suggested Goldmark's announcement was merely a symbolic gesture.

“The decision has no effect on the project moving forward and we look forward to permitting and operating a world-class port in Longview that will provide family wage jobs and tax revenues right where they are needed in Cowlitz County,” Chapman said.

The 2013 letter cited by Chapman did note that Millennium had worked to clean up environmental damage caused by a previous tenant, and said it could continue to operate pursuant to the existing lease with Northwest Alloys. However, the letter also explicitly said Millennium “does not have rights of tenancy” to the aquatic lands absent a sublease approved by the state.

Jan Hasselman, staff attorney at the environmental law firm Earthjustice, promised a lawsuit if Millennium tries to move forward without a sublease. Last January, he prepared a legal memo arguing that the state had broad authority to reject the sublease based on the company's financial condition, business reputation and other factors.

In making his announcement, Goldmark said a consideration of those factors prompted “great concern.” Millennium had refused to provide basic information about its relationship with Northwest Alloys, a subsidiary of Alcoa, and about its own finances following the bankruptcy of its previous owner, Arch Coal, last year. Further, Goldmark noted, the company had misled the public about how much coal it intended to handle at the terminal.

“Millennium can't operate at this site without a sublease, and they don't have it, and the incoming commissioner has been crystal clear she doesn't support these projects,” Hasselman said.

Jay Manning, board chairman of Washington Environmental Council, called the decision the “final nail in the coffin” for the project. Late last year, the Environmental Protection Agency criticized a draft study the Army Corps of Engineers did for the proposal as inadequate.

A global collapse of coal prices amid concerns about pollution and competition from natural gas have made things difficult for the industry. The Northwest, with a history of environmental activism, has been particularly hostile to new fossil fuel projects.

In October, Millennium's parent company, Utah-based Lighthouse Resources Inc., announced that it had begun exporting coal to Asia through a shipping terminal in British Columbia, after its efforts to secure port access in the American Pacific Northwest had come up empty.

Last spring, the Army Corps of Engineers and the state Department of Natural resources denied necessary permissions for the Gateway Pacific Terminal, a proposed deep-water port at Cherry Point, north of Bellingham, saying the terminal would interfere with the Lummi Nation's treaty-reserved fishing rights.

“At one point there were eight coal-export proposals in Washington; now we're down to zero,” Manning said. “There were six in Oregon; now there are zero. These proposals are a relic of an economy that's going away.”

In a separate announcement, Goldmark said he was adding 45 acres that had been set aside for the Gateway project to the Cherry Point Aquatic Reserve, saying it would help conserve habitat crucial to the state's herring and salmon.- AP