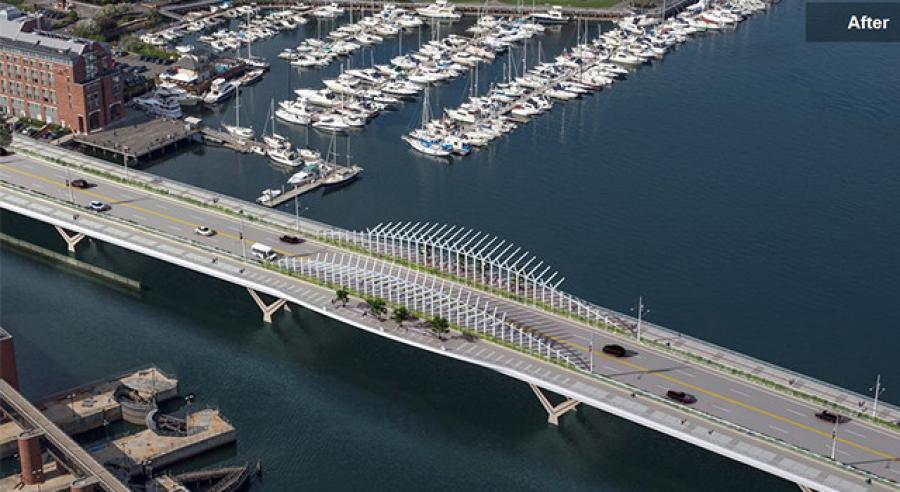 Construction is expected to be completed by autumn 2023, MassDOT said.

The board of directors for the Massachusetts Department of Transportation approved a contract for about $177 million to replace Boston's North Washington Street Bridge that carries traffic over the Boston Inner Harbor between the North End and Charlestown.

MassDOT said some project activities, including utility work, are expected to begin this spring, with construction starting next autumn. That will require traffic lane reductions to allow crews to safely and effectively work on the structure, it said.

"This project is being carried out to improve the functionality of the bridge and ensure reliable travel throughout this area. This bridge is 118 years old and carries intercity vehicles as well as local MBTA bus, shuttle and tour bus routes," MassDOT said.

It also noted that "the bridge is safe for travel currently," but that due to its condition it requires between $1 million and $2 million in annual repairs.

"This bridge is an important link into the heart of Boston and we have been grateful to city of Boston officials, local leaders and key stakeholders as we have worked on the design for the new bridge," said Highway Administrator Jonathan Gulliver. "With this project, we will fully replace this city of Boston-owned bridge, improving the motor vehicle lanes – but just as importantly, improving the bridge to accommodate pedestrians, cyclists and mass transit users."

MassDOT said the existing bridge is also "a critical link in the MBTA bus network, providing passage for several Haymarket-destined bus routes from the north . . . MassDOT and the MBTA have been in close coordination and every effort is being made to minimize the travel time delays for these routes."