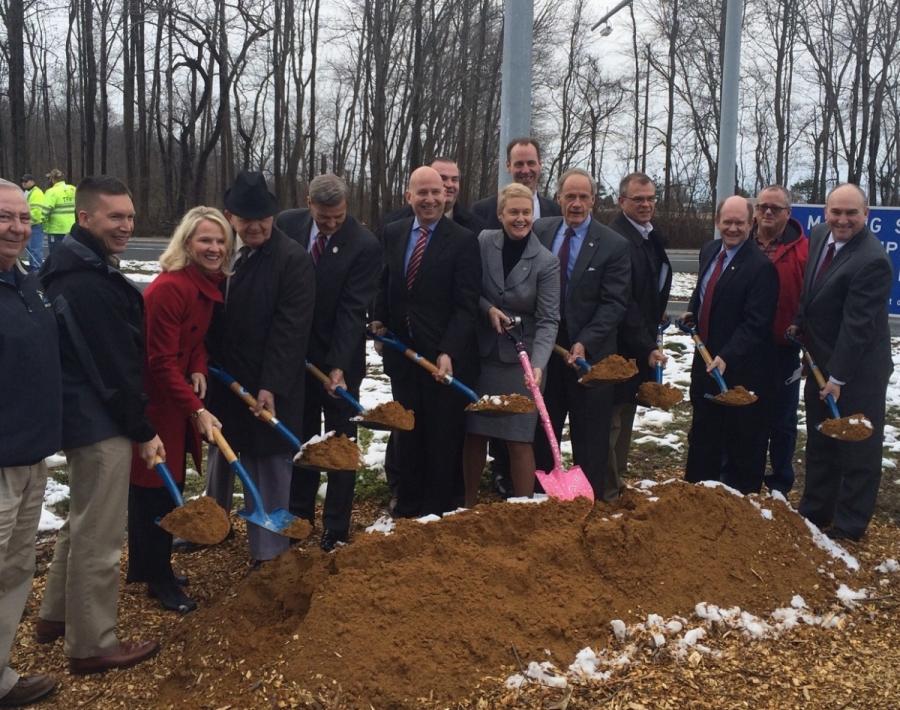 Officials gather at the weigh station to break ground on the new U.S. Route 301 Mainline.

Speaking to those assembled, Transportation Secretary Jennifer Cohan said, “The U.S. 301 project will improve safety and traffic flow into and out of the state of Delaware. First, it will address safety on a roadway that saw far too many crashes and fatalities. Second, it will remove trucks from the existing 301 and other local roads. And, third, it will reduce traffic at key intersections and roadways in the area. A new U.S. 301 will reduce traffic by at least 20 percent on more than half of our local roadways.”

The new U.S. Route 301 Mainline will consist of a new four-lane [two lanes in each direction], all electronic tolled, limited access roadway on a new location, extending generally northeastward from the Maryland/Delaware state line, west of Middletown and tying into state Route 1, north of the Biddles Corner Toll Plaza, south of the Chesapeake and Delaware (C&D) Canal.

“This work on Route 301 reflects our commitment to responsibly target investments in transportation to improve quality of life and attract employers and visitors to our state,” said Gov. Markell. “I'm proud those years of hard work and planning have allowed us to leverage significant federal resources for this project, which is attentive to the needs of the local community and promotes long-term economic growth, while providing hundreds of construction jobs to Delawareans.”

“The Route 301 project is a forward-thinking step to eliminate congestion, improve safety, and create a nurturing environment for business in southern New Castle County,” said U.S. Sen. Tom Carper. “As with many transportation projects in the state, this is a great example of federal and state government working together on improvements that will have a positive economic impact to our state and region.”

With the anticipation to have the roadway open for traffic by the end of the calendar year 2018, the project's design team has divided the project into seven phases each bided individually, but constructed simultaneously. To-date, four of the bid phases of this $470 million transportation plan have been awarded and construction teams are on site.

“We are constantly seeking ways to improve accessibility and increase safety for motorists who utilize our highways and byways,” said U.S. Sen. Chris Coons. “The key federal funds help DelDOT expand U.S. Route 301, reducing congestion and better connecting our communities and businesses in one of the fastest growing areas of our state. Thank you to U.S. Transportation Secretary Anthony Foxx who has been very supportive of this project and understands that this TIFIA [Transportation Infrastructure Finance and Innovation Act] financing was the lynchpin that helped make this project a reality.”

DelDOT estimates building the new U.S. 301 will employ 5,200 individuals in construction oriented jobs, 2,400 in supporting industries, and thousands more indirect jobs among companies benefiting from the presence of the construction effort.

“This project at U.S. Route 301 is a great example of why I've been fighting in Congress to put in place a long-term plan for transportation and infrastructure improvements,” said U.S. Congressman Carney. “The expansion will create jobs, make the roadway safer, and support economic growth in the state. I'm glad that government, business, and community partners came together around the design and planning of this project, and I'm excited to kick off the construction.”

Middletown Mayor Ken Branner said he is thrilled ground is finally being broken for the new U.S. 301.

“This will help the Middletown area all the way around. It will alleviate congestion and traffic in the area and it will be a bonus for trucks and travelers trying to bypass Middletown to get to SR 1. Because we have DelDOT-maintained roads running through Middletown, we have always had a great partnership with DelDOT, and that will continue with this new road.”