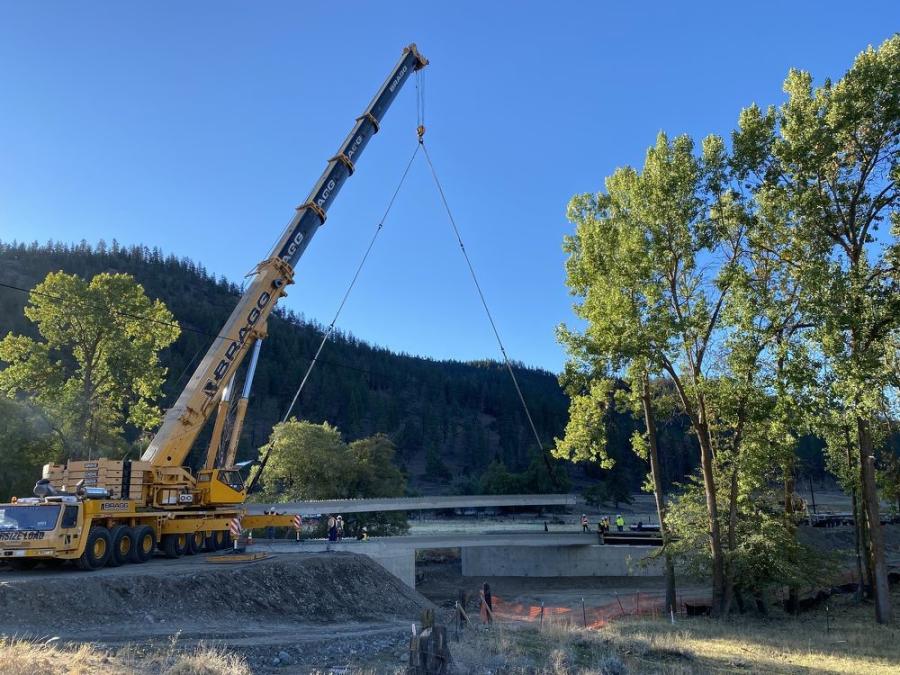 The Grove GMK 7550 crane was a vital piece of equipment for bridge construction.

Steelhead Constructors started work on the $10.2 million Moffett Creek Bridge Replacement Project last May, a California Department of Transportation initiative that will be delivered by the end of November.

The project is taking place 6 mi. north of the city of Fort Jones (Siskiyou County) in Scott Valley. The bridge is along State Route 3. 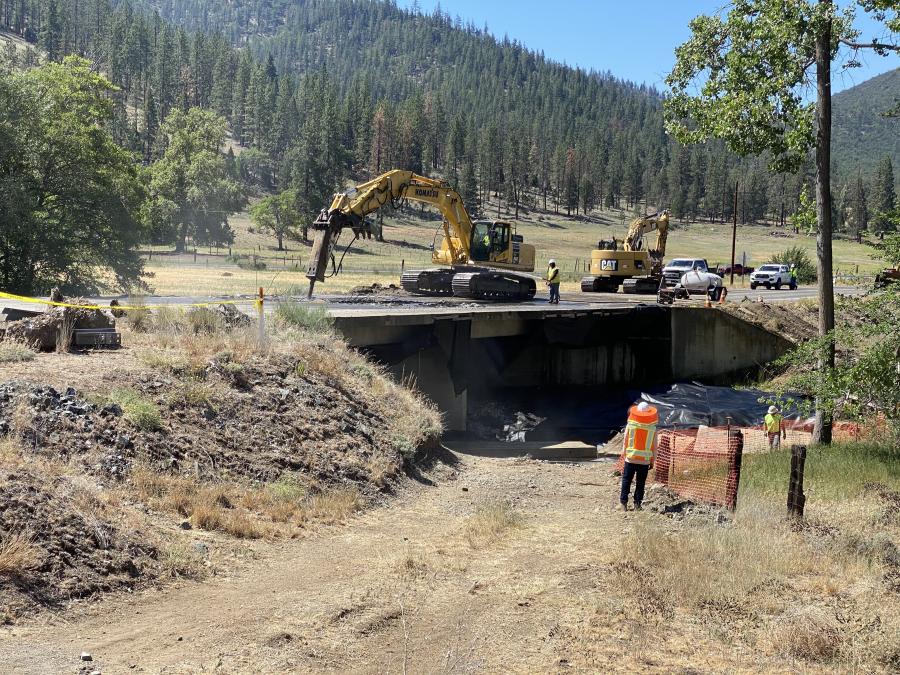 In addition to the complete bridge replacement, crews also are widening the roadway shoulders to conform with the new bridge width, and this included an upgrade to the bridge approach railing to bring it into compliance with current safety standards. Crews also will be responsible for placing an asphalt overlay along the detour route, which will upgrade the driving surface to provide a smooth, stable and safe route for motorists.

The old concrete T-beam bridge was 96-ft. long and one lane each direction. The new bridge is on the same alignment as the old one, based on a precast concrete box girder design, and will be 100-ft. long with one lane each direction when completed. Currently, Steelhead crews are focusing their efforts on hot mix asphalt paving and guardrail installation. While construction of the new bridge is expected to wrap up this month, it will be opened to traffic by December 2021.

"Steelhead Constructors and Caltrans have partnered together to complete this fast-tracked project driven by short environmental and weather work windows," said Troy Kockrow, Steelhead's project manager. "The traffic detour and precast bridge design allowed construction to proceed quickly and was an efficient design by Caltrans."

Steelhead had sufficient time to prepare an initial construction plan for the precast concrete box girder bridge, which was built between June and November of this year.

"It was linear construction with traffic detoured around the project on a country road," said Kockrow. "We worked on the foundations and substructure simultaneously, followed by precast girder erection and concrete deck placement."

Key pieces of equipment used for the bridge construction included a Cat 950 loader, a Cat TL1055D telehandler and a Grove GMK 7550 crane.

The demolition of the old bridge was completed in 10 days, which began on June 28.

"It was conventional bridge demolition," utilizing excavators and front-end loaders, said Kockrow. "Materials were processed on-site first and then trucked to recycling centers. To prevent debris from falling into the water, a stream diversion with a crane mat containment system was in place."

Critical equipment for this aspect of the work had operators using a Komatsu PC360 and Cat 330 excavators with hydraulic hammer attachments.

The roadway shoulders to conform with the new bridge width, along with the upgrade to the bridge approach railing, went smoothly.

"The project included sliver fills to widen the existing roadway embankment," said Kockrow, "and a complete roadway structural section replacement on the bridge approach roadways [0.10 miles] consisting of 0.45 ft. of HMA over 0.55 ft. of Class 2 Aggregate base."

The placing of the asphalt overlay along the detour route to upgrade the driving surface was done by the book. 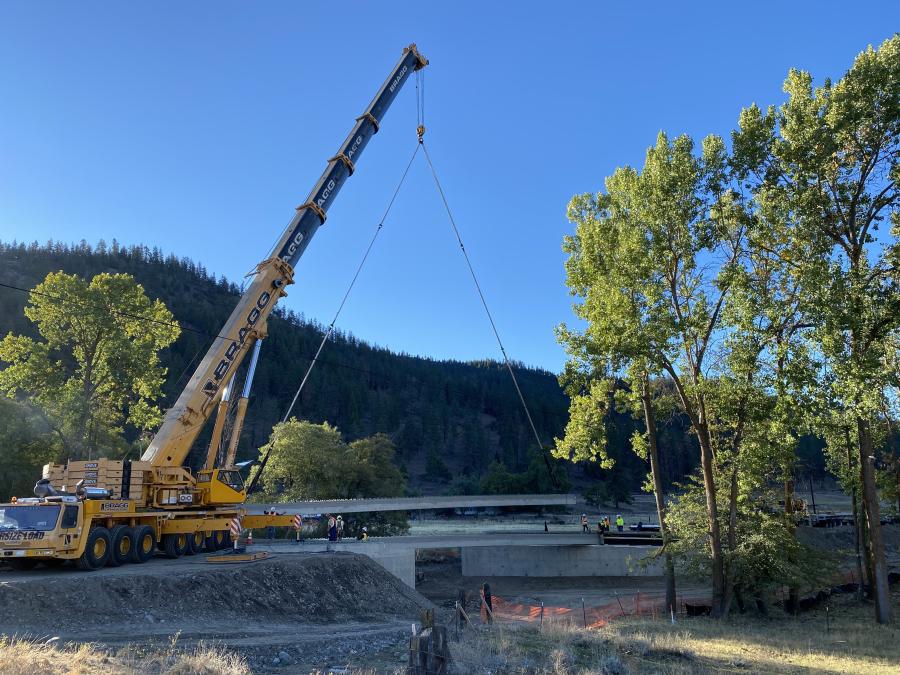 "As the first order of work, the detour dig outs and overlay work was done in two shifts under traffic control, followed by striping," said Kockrow. "Once the pavement delineation and signal systems were in place, traffic was shifted onto the detour route and Highway 3 was closed to begin the new bridge construction work."

This work was subcontracted out.

In terms of new materials used for the construction, crews used more than 150,000 lbs. of steel; large amounts of various types of concrete, including prefabricated structural box culverts, headwalls, drainage inlets, wing walls and box girders; close to 100 30-in. by 19-in. elliptical reinforced concrete pipe (class III) components and a host of other standard materials.

"Prompt service by I-5 Rentals and on-site equipment mechanics helped to keep the equipment serviced regularly and in good operating order," said Kockrow.

Steelhead purchases and rents equipment from I-5 Rentals in Redding, Road Machinery in Redding, Peterson CAT in Redding and Ritchie Bros. in Dunnigan.

"This is another significant SB 1 project that will ultimately improve the travel experience for thousands of Californians who use this stretch of State Route 3," said Caltrans Director 2 Director Dave Moore. "Thanks to SB 1, we are able to make investments in the district that fix our aging infrastructure, upgrade and maintain the state highway system and enhance safety for the traveling public." 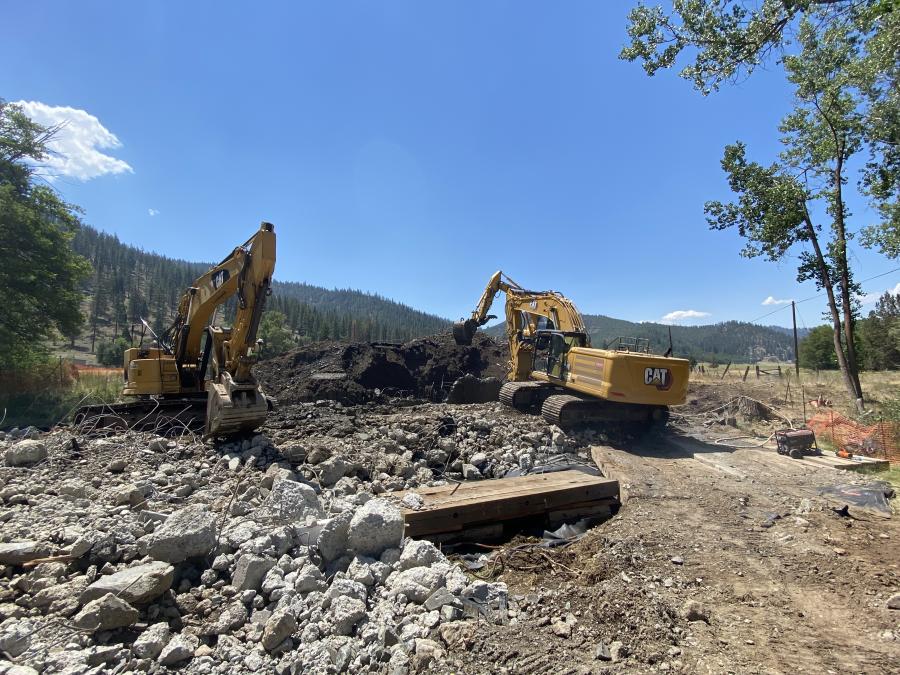 Senate Bill 1 is covering $7.7 million of the total cost. According to Caltrans, SB 1 "provides $5 billion in transportation funding annually split between the state and local agencies. Road projects progress through construction phases more quickly based on the availability of SB 1 funds, including projects that are partially funded by SB 1."

The existing bridge had outlived its lifespan and needed to be replaced to bring it in compliance with current safety standards. The new one is expected to carry the same amount of traffic.

The new bridge was designed by Caltrans.

The bridge is located within the Mount Shasta area, which is monitored by the United States Geological Survey and rates it as a very high-threat volcano. CEG