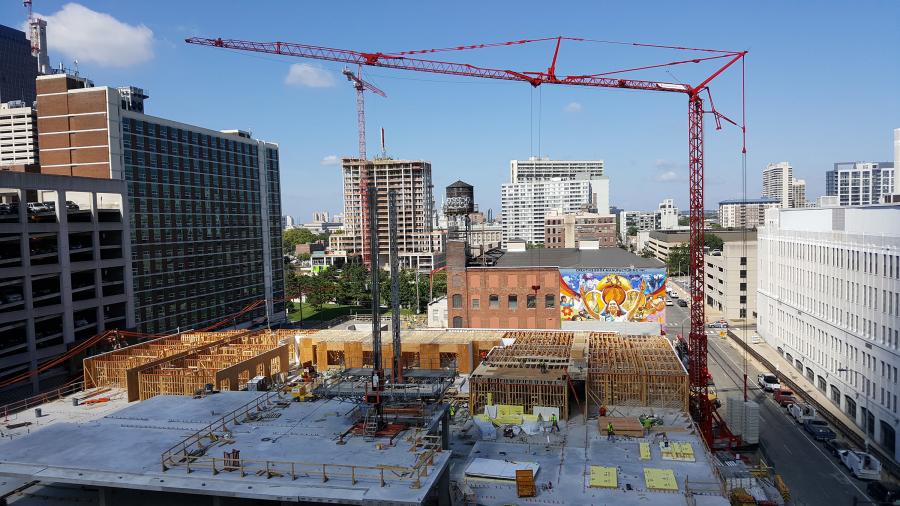 To be known as the “gateway” to Center City Philadelphia, Lenick Construction is hard at work on the second building of the Hanover at North Broad Project utilizing Stephenson’s Potain T130.

When Lenick Construction first bid this job it did not know about self-erecting tower cranes like the pair of Potain Igo T130's now on the Hanover at North Broad Project located on North Broad and Callowhill streets in Center City Philadelphia.

Dan Petrucelli, vice president of construction of Lenick Construction, said “We saw a Potain T85A set up on a building job as we were driving along the Schuylkill and were curious. We heard of potential savings using self-erecting tower cranes and with a quick phone call we were in contact with Darin D'Ascanio of Stephenson Equipment Inc. [SEI].

“After meeting with D'Ascanio, Lenick Construction rented the Potain T85A to erect the Isles in Manayunk, a 156 luxury apartment complex located on the heart of Main Street in Manayunk. Using the Potain proved beneficial, the project went very smooth and was completed under budget and much quicker than anticipated. With this first experience under its belt, Lenick knew that it had to use the Potains on the Hanover at North Broad Project.

“Stephenson has been awesome to work with. Before contacting Darin, we didn't have a relationship with SEI. They are great at the whole package from set-up to logistics and we really appreciate their willingness to spend time with us on planning at the job site,” Petrucelli said.

Petrucelli added that SEI even trained Lenick's operators for certification at their facility in Philadelphia.

Both cranes have the ability to offset the jib to 30 degrees.

Lenick Construction, based out of Jamison, Pa., was established in 1972 and is constructing the two buildings situated on the corners of North Broad and Callowhill streets. The five story buildings will consist of 339 apartment units on top of a PTC Podium with community and retail space underneath the podium deck. Lenick has been on the project since May of 2016 using the Potain tower cranes to move and set all the wood, windows, wall panels and floor joists.

As of late August, the T130 had begun to pick roofing materials up to the larger of the two buildings at the southwest corner of Broad and Callowhill.

A third Stephenson Potain T85A was expected to be on the job site soon to assist. The capabilities and efficiencies of the Stephenson tower cranes on this job are projected to save Lenick close to 50 percent in costs and man-hours over using traditional hydraulic cranes, according to Petrucelli.