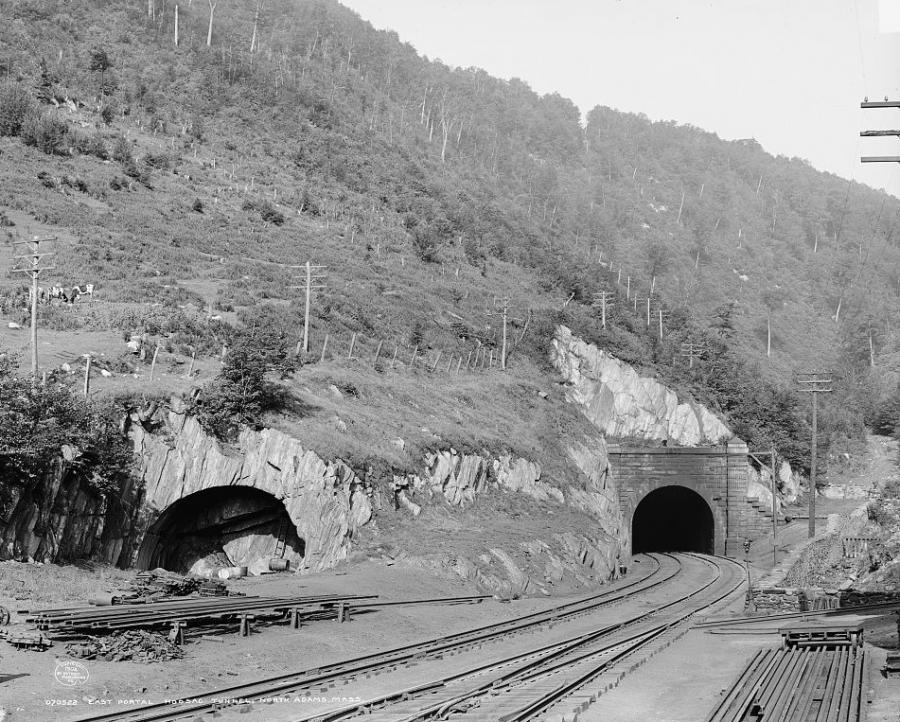 Boston-area merchants in the early 19th century wanted to transport goods directly west but couldn't, while Western Massachusetts and upper New York state travelers were stymied in their travels east. What was the common barrier? The Hoosac Mountain, a 16-mi.-long spur of Vermont's Green Mountains. It ranges up to 2,400 ft. above sea level and is a terrific roadblock.

Too high and steep for horse-drawn wagons to cross, it required travelers and merchants to go around the south end of the range for passage. This was an expensive and time-consuming detour that frustrated everyone because their destination was just over there, less than 5 mi. away.

In response to this general grievance, the construction of a tunnel was proposed in 1819, possibly for a canal. The idea was shelved fairly quickly. In 1841, the scheme was taken down from the shelf and dusted off with the tunnel this time proposed as a way for railroad traffic to move east and west. With an estimated price tag of $2 million, the tunneling project was expected to eat up five years and millions of pounds of rock. (In the end, more than 2 million tons of aggregate was excavated.) 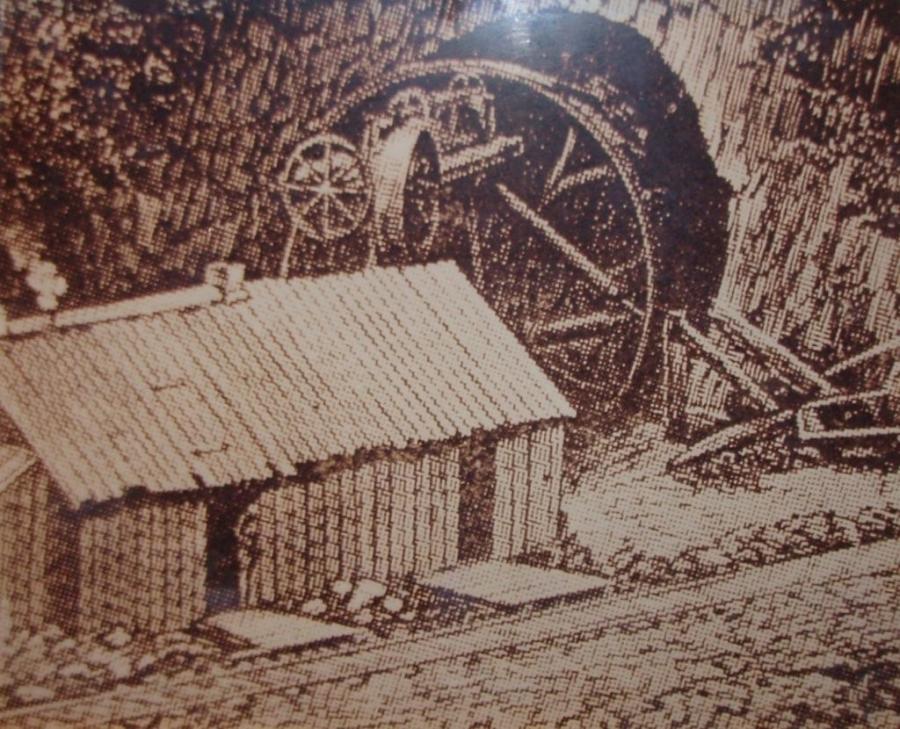 Tunneling began in earnest in 1851. Hopes for success were buoyed by the arrival of a huge device at the tunnel's eastern terminus designed especially for the task: Charles Wilson's patented stone-cutting machine. The cast-iron "contraption," as some historians pejoratively describe it, was built in South Boston by Richard Munn & Company. Weighing 75 tons, the revolutionary machine was set up for a trial run a few feet south of the actual tunnel entry point.

The machine was supposed to carve a ring 24 ft. in diameter, 13 in. wide and up to 8 ft. deep, whereupon it would be pulled back and black powder explosives implanted to loosen the material inside the ring. Then it would be moved forward and the process repeated. The mechanical stone-cutter reportedly was powered by a 100-hp steam engine.

Wilson's contraption went to work and chewed its way into the mountainside for all of 10 ft. before failing. To be charitable, some historians claim it moved 12 ft. into the mountain before either becoming wedged there or falling apart — accounts differ. In any case, the device was stopped some 25,000 ft. short of completing a trip through the nearly 5-mi.-wide mountain. The carcass of the dead machine remained in its hole for many years.

Hoosac Tunnel expert Chuck Cahoon was asked recently if the Wilson stone-cutting machine is on display today in some museum. "It is not," he said. "About the time of the first World War, it was scrapped for its iron. It had more value as scrap than as a piece of history."

Cahoon believes three machines of more or less the same design were constructed, Wilson's being the first. While it was a spectacular failure, it deserves some credit for taking on a literally very hard task. The Hoosac Mountain's east base is comprised of quartz and granite gneiss rock that defies easy penetration. 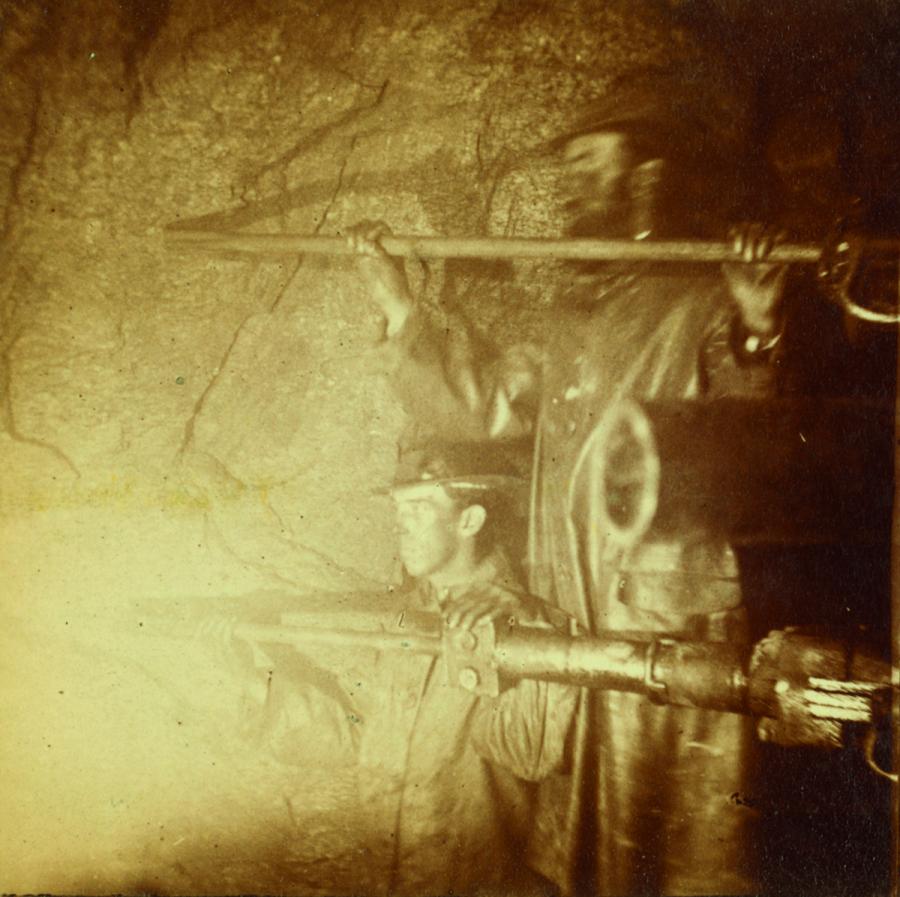 "It's some of the hardest rock known," Cahoon said, noting that the Hoosac is a remnant of mountains that once ranged far higher, monuments of sediment that over the eons were compressed hard and then harder still. "That stuff was packed over years and years and years."

Would Wilson's machine have succeeded had the rock been less dense? "I'm not sure," Cahoon admitted. "It might have gone a little farther, but not a whole lot." Three years after Wilson's failure, another engineer-inventor, Herman Haupt, tried to surpass him with a machine of his own design. Alas, it is said to have penetrated a foot or less before failing.

Cahoon became involved with the history of the tunnel in 1973, exactly one hundred years after the tunnel eventually was completed. "I wanted to put on a centennial celebration of the tunnel, and I've been at it ever since," he said. His involvement is a chief reason the town of North Adams, near where the tunnel exits the east side of the mountain, is home to a downtown museum as well as a tunnel-history display at the nearby Heritage State Park Museum. "The tunnel is the number one item in town, so it is part of the history of North Adams, too."

The 76-year-old retired mechanical designer said he appreciates the technical aspects of the tunneling process. Although the project dismally failed to meet its original completion date and cost estimates — it ultimately consumed more than 20 years and $20 million — and cost the lives of about 200 laborers, it literally and figuratively broke new ground in the engineering and construction of tunnels.

The early unsuccessful attempt to build lumbering mechanical devices for tunneling wasn't foolish in hindsight. It just took more than a hundred years of refinement in technology and metallurgy for the concept of a tunneling machine to evolve into a practical piece of equipment.

Today, tunnel boring machines can weigh 1,000 tons or more and stretch up to 500 ft. long. They even have their own widely recognized abbreviation — TBM. The massive machines can dig through rock and soil at a rate of up to 50 ft. or more a day and futurist Elon Musk's The Boring Company is promising its next generation model will be able to tunnel 300 ft. in 24 hours.

In any event, the employment of machines wasn't the only tunneling innovation introduced in the Hoosac project, which at the time of its completion was the longest tunnel in North America and the second longest in the world. The project was pioneering in several respects, considering:

• In the beginning, laborers hand-punched holes in the Hoosac tunnel for insertion of black powder charges. They pounded star drills into the rock using sledgehammers. The physically demanding job eventually gave way to steam-powered drills. However, the steam drills weren't used too long, because the farther the tunnelers went from the entrance, the less effective the hosed-in steam was as a power source.

• So, tunneling engineers switched to compressed air to power their mechanical drills. With them, they punched deeper holes for insertion of black powder. This conversion by Hoosac engineers to drills running off compressed air is credited with spurring development of the modern pneumatic tool industry.

• Eventually, construction teams substituted nitroglycerin for black powder. That, too, was pioneering. Such use of nitro is considered a first for a civil engineering project. The project's resident engineer also introduced electrical firing of nitro.

According to Cahoon, the majority of the tunnel's length was created after engineers switched to pneumatic power and nitroglycerin. "When the Hoosac tunnelers started, they didn't have the machinery or the know-how to do it, so they sort of invented things on the spot, tried new things and it kept getting better and better."

Tunneling proceeded simultaneously at the east and west entrances into Hoosac Mountain. This dual penetration expedited the work but created a problem: What assurance was there that the separate tunnels would come together in the middle? Global positioning systems and laser alignment tools were not even dreamt of in the 1850s. 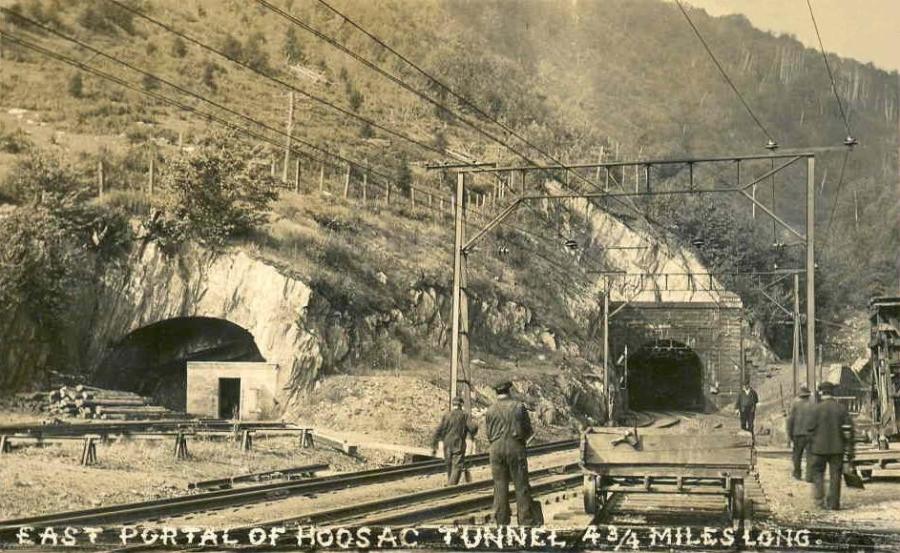 To align his tunneling teams, civil engineer Thomas Doane devised a system where survey towers were built upon consecutive high points atop the Hoosac. The towers were perfectly aligned with the tunnel route far below. An engineer using a surveyor's transit would sight to a colleague at the entrance of the tunnel, who in turn would transfer the reading to a plumb bob hanging from the tunnel ceiling. The sightings were checked repeatedly.

If this was not the first instance of long-distance alignment, it certainly was a Herculean application of the principle. In the end, the tunneling crews came within 9/16 of an inch of joining the tunnel walls perfectly. Nine-sixteenths of an inch! Cahoon says the feat compares favorably to shooting at a dime 2.5 miles away and hitting it.

To more efficiently carve out the tunnel, work crews instituted what they called a "center cut" system. The steam-powered and then pneumatic drills would sink a line of horizontal holes about six feet apart in the face of the tunnel. A set of vertical holes would connect the end of each horizontal line. All the holes veered toward the center of this holing. The ensuing nitroglycerin blast would create a pie-shaped void in the center of the face. Subsequent explosions collapsed material into the center cut void, speeding the process.

Midway between the two tunnel ends, Hoosac engineers sank a shaft more than 1,000 ft. to the grade level of the tunnel. The hole was 14 ft. wide and 27 ft. long, a massive and dangerous undertaking. The shaft eventually would ventilate the tunnel. More immediately, two plumb lines were suspended in it to transfer the mountain-top alignment of the tunnel to the tunnel level far below. Eventually a dome was built above the tunnel bottom and 25 ft. of fill was dumped to eventually protect tracks from falling rocks and water. Two small ventilation shafts circumvented the dome of dirt and entered the tunnel from the sides.

A similar but shorter vertical shaft was sunk near the west end of the tunnel to help crews work through rubbly stone. Each vertical shaft also let crews work outward on the tunnel toward incoming work crews, thus multiplying the digging effort and hastening the work. Cahoon said that as far as he knows, this was the first instance of multi-face tunneling. 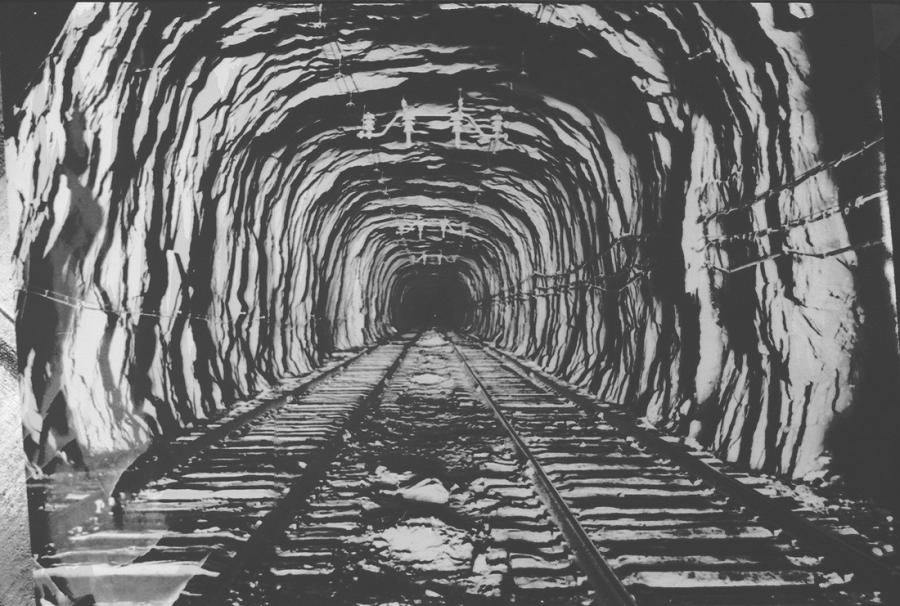 The historic construction of the Hoosac Tunnel once was a subject of national conversation and the talk of the world's foremost engineers. It was considered a remarkable accomplishment, albeit a long-drawn-out and deadly one. That comes with pioneering, too. "But the story is kind of being lost now, even here where the tunnel is on the town seal," Cahoon stated. "As time goes on, it becomes less and less known."

The tunneling feat still is appreciated by people who understand the challenges overcome in accomplishing it. Cahoon tells of an inspector from the U.S. Bureau of Mines who visited a quarry in Adams a few miles away, heard about the Hoosac Tunnel and drove over to the museum. After examining the literature and perusing the exhibits, the man told Cahoon that he had worked on many tunnels under the Rocky Mountains in Colorado. In one case, a tunnel somewhat longer than Hoosac's had been constructed using the latest navigational techniques and technologies. The result? His crew missed the target by 18 in. The Hoosac civil engineers' 9/16 of an in. error certainly holds up well after all these years.

In Cahoon's opinion, it was all worth it — the years of labor, millions of dollars spent and even the lives lost. "It provided the incentive for all the inventing and pioneering work that occurred, and the tunnel still is being used today," he said.

Not only is it still being used, it's being enlarged. The ceiling of the tunnel currently allows 20-ft.-high auto carriers to rumble through. Government funding is being sought to grind off the ceiling so that it is 22.5 ft. above the tracks, which will allow double-stack container cars to use the tunnel.