Hurricane Michael Recovery: Equipment Suppliers Do Their Part to Help 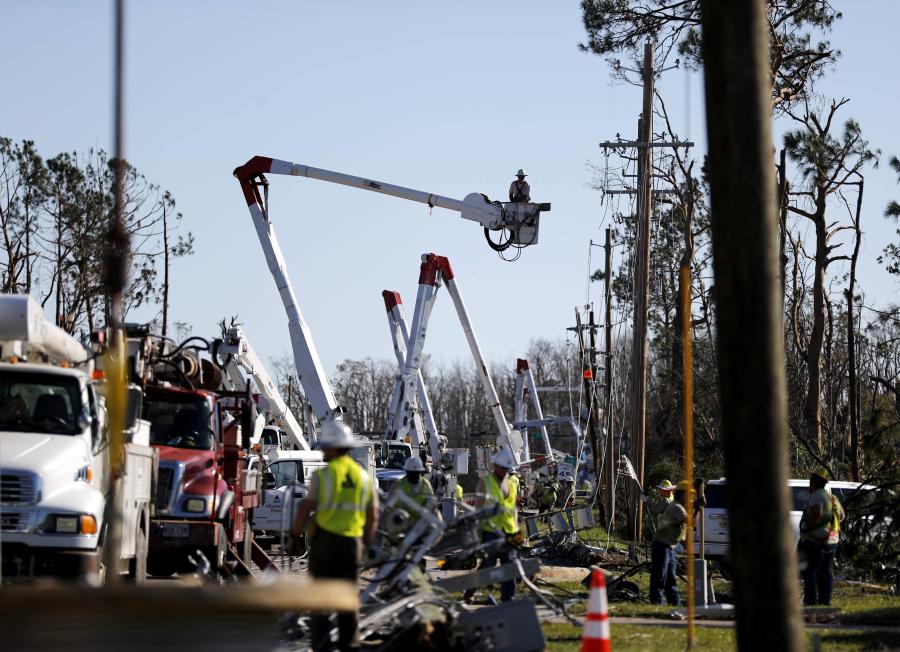 When Hurricane Michael slammed the Gulf Coast earlier this month, it left an unprecedented trail of destruction that will cost millions of dollars and months, if not years, of effort to repair.

In the aftermath of the first Category 4 hurricane to strike the Florida Panhandle since record keeping began in 1851, equipment dealers faced the twin challenge of supplying dozers and excavators for government cleanup efforts while at the same time recovering from the damage to their own businesses.

“In Mobile, we're about two-and-half hours away, so we didn't get hit, but our Panama City branch was hit pretty hard,” said Garlon Rainey, vice president and construction division manager, Beard Equipment, speaking by phone from the company's headquarters. “The scene in Panama City is just … just major damage.”

Michael made landfall Oct. 10 at Mexico Beach with top winds of 155 mph and peak water surges of 14 feet.

Panama City, which lies only 24 miles away, suffered some of the worst devastation of any community in the hurricane's path. The largest hospitals were shut down, roads were blocked by water or debris, and buildings were torn apart by the wind.

Beard Equipment had some staff working in Panama City, but the branch was “not really up and running,” Rainey said.

“There are people there, but we are forwarding phone calls to our switchboard and handling them from other stores,” he said. “Our people who work in Panama City have lost property, animals and everything else. People are still trying to figure what the next move here. I suspect that most dealerships in that area are having trouble. You can't even get into town unless you're a first responder. So, you can't even proactively get equipment out for sale or rent at this point.”

Advance planning, which has become habitual for emergency contractors along the Gulf Coast, has been crucial to dealing with the emergency, and Beard began supplying them with equipment while Michael was still gathering strength in the Gulf of Mexico.

“We work with some of the largest emergency cleanup contractors in the country, based out of the Mobile area, and we have some equipment that we're working on with them right now — excavators, wheel loaders, articulated trucks,” Rainey said. “Some of this is going to the DOTs, as well.”

Rainey added, however, that if those contractors were out helping in the storm's immediate aftermath, they were doing so on a very small scale.

“FEMA and the DOT — they haven't even assessed all of the areas because they're so hard to get to,” he said. “They don't even know what the jobs are going to require and where the work is going to be.”

“Even with generator power, there won't be full operations for at least a month and a half,” Rainey said. “The thing about this storm that's different is the amount of tree cover, so the debris is on a completely different level. And the structural damage to buildings is more significant than many of the storms that we've experienced, and I cross the Gulf Coast all the time. This one is significant.

“We're talking about true structural damage to most buildings. They won't be rebuilt, they'll be demolished,” he added. “It's churches, it's schools, it's automobile dealerships, it's tire stores, it's the mall, it's gas stations, it's restaurants, it's all businesses.”

Beard's Panama City employees have been especially hard-hit, and the company has mobilized to help them weather the crisis.

“I would say that 100 percent of our Panama City employees were affected by this hurricane … from roof damage to loss of house structure,” Rainey said. “For our employees, we're providing pallets of water, all different types of food, garbage packs, sanitary wipes, paper towels, towels, soap, all of the things that you bleach, chainsaws, generators.”

Initial estimates indicated the worst-hit areas could be without power for up to two months, Rainey said, but he remained optimistic, nonetheless.

“We will be open for business, but it'll be truly one to two months until we'll be fully operational in Panama City,” he said. “We'll be running transactions out of there. We'll be renting tractors and selling parts and some level of service — we'll be doing all of that out of that branch, but it's going to be far from normal.”