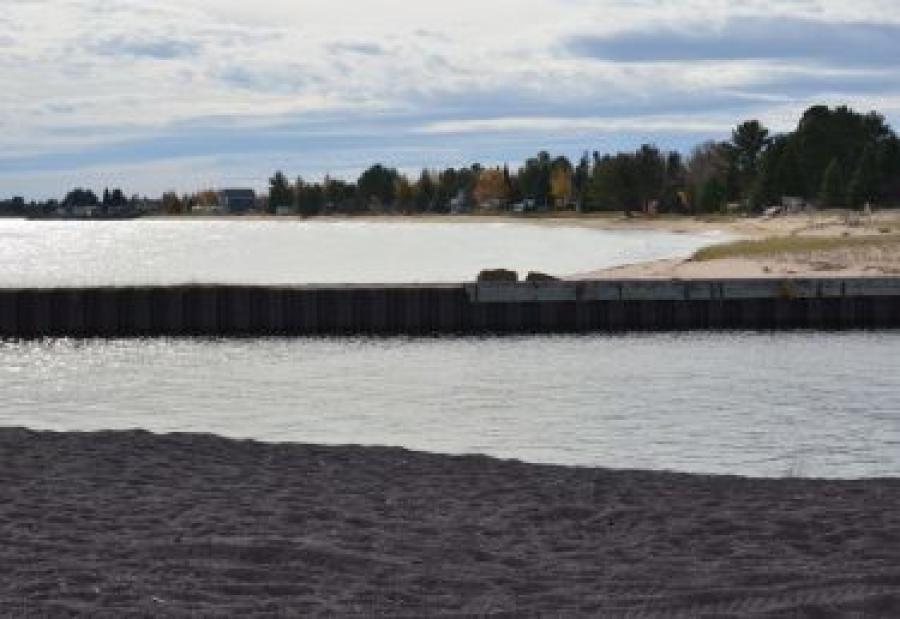 The Department of Natural Resources spent nearly $250,000 this year to dredge 9,000 cu. yds. of sand that was threatening to close off the harbor, but a Lake Superior storm undid much of the work. (Dredging Today photo)

The sands are leftover waste from a stamp mill in Gay, The Daily Mining Gazette reported . Winds and currents have moved much of the pile to the Grand Traverse Harbor. The sand also is taking up space at the Buffalo Reef, which is an important spawning area for lake trout and whitefish.

The Department of Natural Resources spent nearly $250,000 this year to dredge 9,000 cu. yds. of sand that was threatening to close off the harbor, which is located off Sherman Township. But a Lake Superior storm undid much of the work.

The cooperative task force is now seeking a more permanent solution. The task force includes representatives from the Keweenaw Bay Indian Community, Army Corps of Engineers and the Department of Environmental Quality.

“We want to lay out all the possibilities, and by next March we're hoping to have narrowed our focus on two or three or however many options look promising,' said Steve Casey, Upper Peninsula district supervisor of the Michigan DEQ's Water Resources Division and a member of the task force.

One option would be to remove copper from the sand at the White Pine mine site and put the remaining tailings into the mine, Casey said.

“We're looking to do whatever we can to facilitate a beneficial use, because that's the best thing we can do, turn it into a useful product,' he said.

Temporary fixes, such as additional dredging work, will continue until a permanent solution is created.

It held a meeting Dec. 5 to discuss the issue.