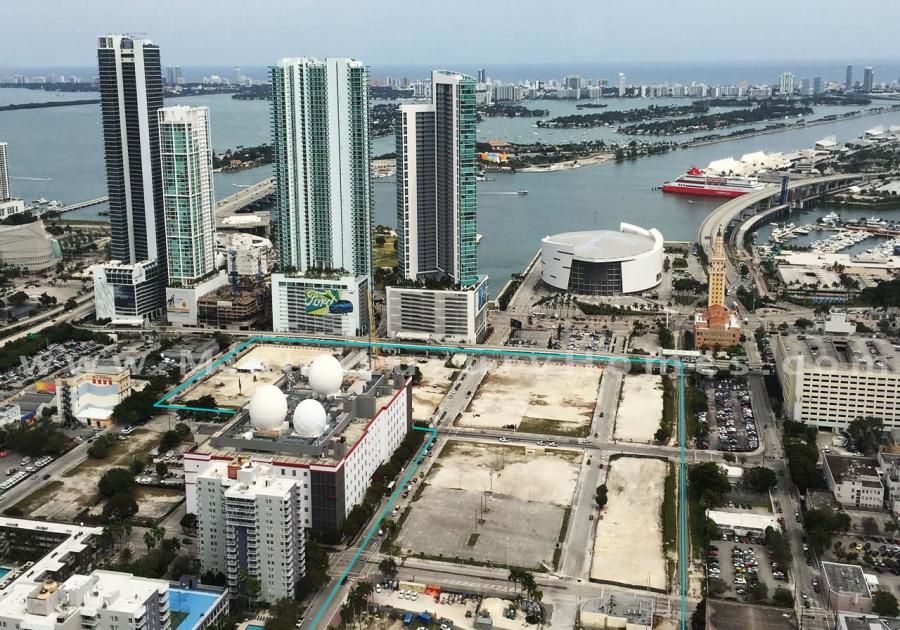 Thanks to a summer camp program organized by the Urban Construction Craft Academy in Miami Gardens, a group of about 20 teenage students interested in pursuing careers in the construction industry received a “hands on” tour of the 27-acre construction site at Miami Worldcenter, one of the country's largest development projects currently underway in downtown Miami, Fla.

The kids, who ranged in age from 13 to 18, put on their hard hats and toured the project's various components currently under vertical construction, led by Nitin Motwani, Miami Worldcenter's managing principal, along with Coastal Tishman Executive Vice President Jim Scarpace, from the project's general contracting team, and partners from The Development Firm.

The first stop was the future home of Miami Worldcenter's open-air retail promenade and the 60-story PARAMOUNT Miami Worldcenter condominium, where the summer camp students got the opportunity to participate in a construction activity with the crew, which involved pouring cement and leaving their handprints on-site.

They learned about the essential building blocks of construction as well as the safety measures employed to keep workers safe. Then, they walked to the site of one the project's rental developments, the 444-unit Seventh Street Apartments tower, where they were hoisted up to the building's completed floors overlooking the downtown Miami skyline.

“Offering high schoolers real-world access to a working construction site is a great way to open students' eyes to the benefits of a career in this field,” Motwani said. “Miami Worldcenter is already creating local jobs and equipping area residents with job training, making initiatives like the Urban Construction Craft Academy a natural complement to our community benefits program.”

Founded by Bill Dozier, a general contractor and professor at Miami-Dade College, the Urban Construction Craft Academy is a non-profit organization that provides participants with skill development, support services and mentorship in the construction industry, preparing students for the global workforce.

The Academy's six-week summer camp program includes classes taught by certified construction professionals that offer a model of employment by which students learn through hands-on experiences and apprenticeships, the routines of work and acquire essential skills and training in the construction industry.

“This group of students represents tomorrow's contractors and developers, and I'm sure they're going to represent us very well in the near future as my generation did,” Dozier said.

The 10-block mixed-use Miami Worldcenter development will include worldclass retail, hospitality, residential and commercial uses surrounded by some of the most exciting demand drivers in the city, including Museum Park, home to Perez Art Museum Miami and the new Frost Museum of Science; American Airlines Arena; the Adrienne Arsht Performing Arts Center; and the Brightline passenger rail station, which will connect Miami to Fort Lauderdale and West Palm Beach in the summer 2017 – and will eventually link South Florida with Orlando by train.

Phase one of the master-planned development is expected to deliver beginning in late 2018.