Knoxville’s Duracap Asphalt Co., one of eastern Tennessee’s top paving contractors, has always been noted for its hard work and the speed with which it gets projects completed for its clients. 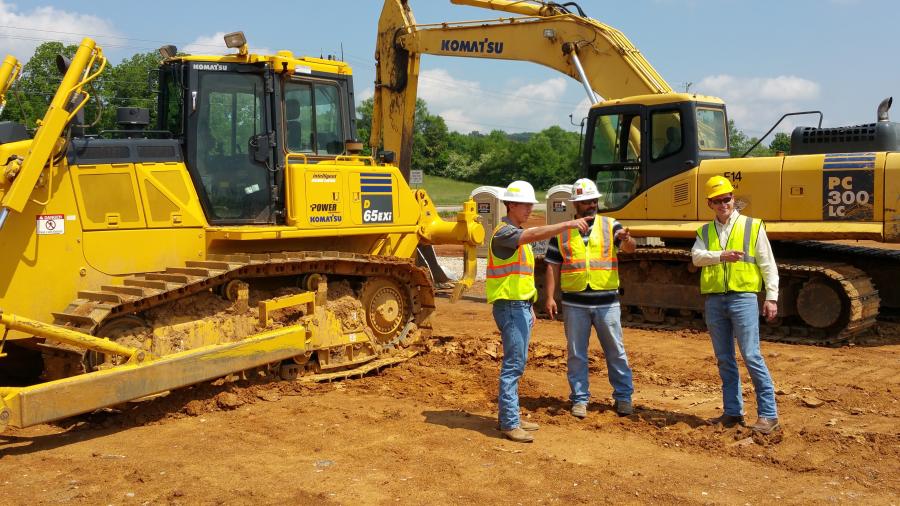 Knoxville's Duracap Asphalt Co., one of eastern Tennessee's top paving contractors, has always been noted for its hard work and the speed with which it gets projects completed for its clients.

But when it wanted to increase its efficiency and accuracy even more in its grading work, it brought in the professionals with another trusted name in the Volunteer State.

Duracap turned to Knoxville-based Power Equipment Company to help it identify a bulldozer that would make its grading work much more accurate. For years, the companies have worked well together and have kept up a long and prosperous friendship.

As a result, Duracap decided to get a Komatsu D65EXi dozer, in large measure because of the GPS technology that it employs to do quick, precise grading.

"We demoed it with Power Equipment and immediately saw that it was a much better way of moving dirt quickly and not have to repeat steps in order to do it," said Camden Guyton, grading superintendent of Duracap Asphalt. "We had not really been interested in GPS until we used the Komatsu D65EXi, but once we did, it was a no brainer after that."

He added that it would often take a time or two to grade dirt on a project to its exact specifications, but once the 217-hp (162 kW) D65EXi showed Duracap what it could accomplish with only one grade, the new machine was a must-have.

Earlier this spring, Duracap worked on a large series of apartment complexes in the Knoxville area where it needed to move approximately 60,000 yds. (54,864 m) of dirt. Guyton said that having the Komatsu D65EXi was a definite time-saver for his crew.

"Oh yeah, it improves the work tremendously in that we don't have to have layout and staking, with a guy running out there giving us four corners and all that," he continued.

The new D65EXi dozer is one of several Komatsu machines in the Duracap yard, which includes PC300, PC228 and PC200 excavators. Each was obtained through Power Equipment.

Guyton said that his company has always been extremely satisfied with the service it has gotten through Power Equipment, which also serves customers throughout Tennessee. Besides Knoxville, branch locations can be found in Chattanooga, Kingsport, Nashville, Memphis and Tupelo, Miss.

Duracap has been in operation since 1960 and offers a full array of site services that include asphalt paving, curbing, grading and utilities. Additionally, the firm maintains hot-mix asphalt plants and can provide recycled aggregates for a particular project.

The number of jobs that Duracap has done in the area over six decades is seemingly endless. Roads, parking lots, municipal buildings, schools, churches, shopping centers and industrial and office parks have all been built due to the site work done by Duracap.

Guyton points to the company culture of getting the job done quickly and efficiently, no matter how many long hours have to be put in to do it, as being a key element in Duracap's historic success.

On a more personal level, Guyton characterized his job there as really being part of a family.

"I began working here when I was 16 years old," he remembered. "It is just a tightly-knit company and everybody is real close."

Duracap Asphalt is located at 2535 Asbury Road in Knoxville, Tenn.