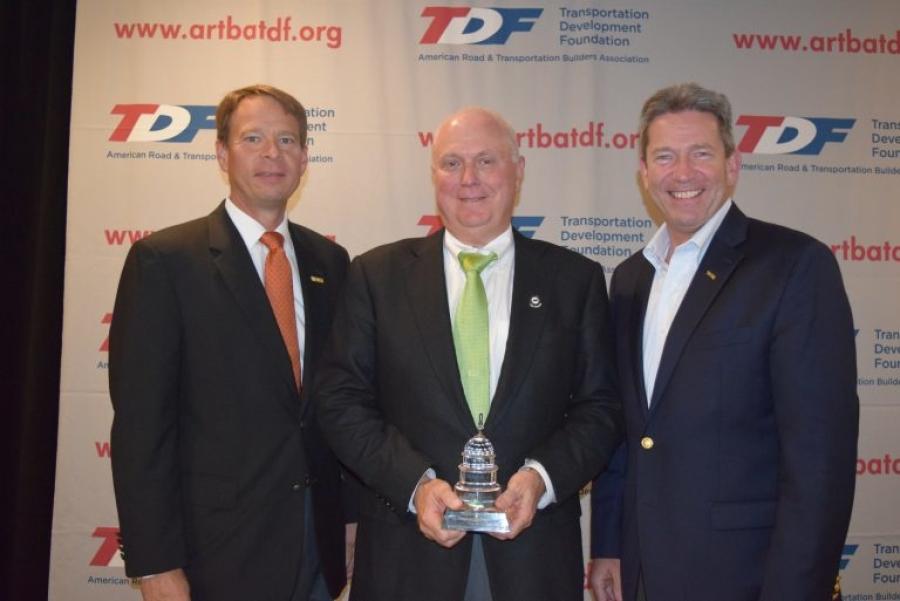 Steve Wright, president of Charleston, Tennessee-based Wright Brothers Construction Company, is the sole recipient of the American Road & Transportation Builders Association's (ARTBA) highest honor—the “ARTBA Award.” It was presented to Wright May 17 during the association's Federal Issues Program held in the Nation's Capital.

Established in 1960, the “ARTBA Award” recognizes individuals for outstanding contributions that have advanced the broad goals of the association. Over the years, recipients have included several governors, more than 25 U.S. senators or representatives, two U.S. secretaries of transportation and dozens of top leaders and executives from government and the private sector of the transportation construction industry.

As a trustee on the ARTBA Foundation, he has played a leadership role in development of the annual Dr. J. Don Brock TransOvation Workshop and the new Safety Certification for Transportation Project ProfessionalsTM program.

Wright also owns a piece of ARTBA's history. He is the first graduate of the Young Executive Development Program—known today as the Industry Leader Development Program (ILDP)—to be elected chairman of the board. Created in 1996, the ILDP boasts of more than 650 graduates from 200 companies, state contractor chapters and public agencies. The program, which provides a Washington, D.C.-based “boot camp” introduction to federal policymaking and advocacy, is aimed at building the next generation of industry leaders.

Established in 1902, Washington, D.C.-based ARTBA is the “consensus voice” of the U.S. transportation design and construction industry before Congress, the White House, federal agencies, news media and the general public.