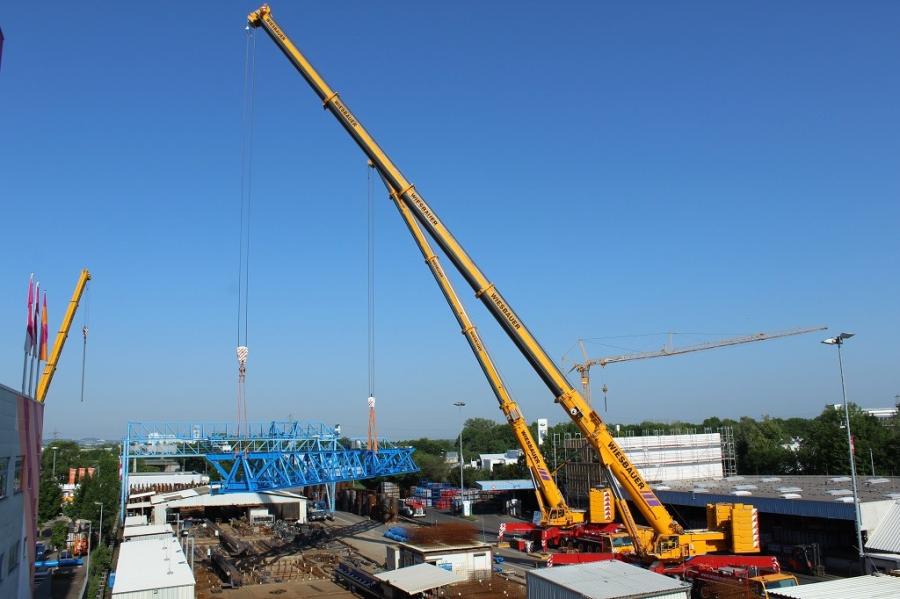 Due to the tight space conditions, there was only one single spot at the premises where the two cranes could be positioned next to each other for the tandem lift – and for one of the cranes, this meant being at a significant distance from the assembly position for the gantry crane.

As part of a holiday assignment, Bietigheim-Bissingen-Germany-based crane service provider Wiesbauer lifted a 58-tonne, 45-meter-long gantry crane at Gebr. Lotter KG's mild steel yard in Ludwigsburg. A Terex AC 700 all terrain crane and a Demag AC 500-8 all terrain crane were used for the job. In a tandem lift, the two cranes lifted the load to the pre-planned assembly location – which proved just how much perseverance they had.

The job description itself indicated that the project would be a unique challenge in many ways: First, the unwieldy gantry crane had to be unloaded from the delivery truck, after which its girder needed to be moved to the desired position with a tandem lift. Once there, it had to be kept suspended in the air so that the gantry crane's final assembly could be carried out. The reason? Setting the gantry down was impossible due to the goods being stored at the yard.

“The distances that had to be spanned and the associated radii, together with the load's weight, were what made us decide to use our AC 700 and AC 500-8 for this project,” said project manager Marco Wilhelm, who was in charge of planning the lift at Wiesbauer GmbH & Co. KG.

Customer Requirement: The cranes had to be set up without affecting operations

Before the actual lift, however, the two cranes had to be set up at the site. This not only had to be done while operations were still ongoing, but also in such a way as to not interfere with them. Of course, this requirement would also apply when disassembling the cranes after successfully completing the lift. To make things even more challenging, operations continued six days per week, meaning that the Wiesbauer team could not count on the work there to slow down significantly.

“This requirement was also a big part of why we chose these two cranes, as their ease of assembly is outstanding, and they can be set up and disassembled very quickly,” Wilhelm said.

Due to the tight space conditions, there was only one single spot at the premises where the two cranes could be positioned next to each other for the tandem lift – and for one of the cranes, this meant being at a significant distance from the assembly position for the gantry crane.

“This meant that we had to perform the lift working with high radii,” Wilhelm said.

The Wiesbauer team planned for the AC 700 to deal with the toughest part, as it would have to span the entire width of the yard, all the way to the rear gantry crane rail axis, with its load side. The maximum radius required for this was 42 m, while the maximum radius required for the AC 500-8 crane was 24 m. The fact that the AC 700-9 was able to handle the aforementioned radius made it possible to avoid using additional time-consuming and expensive equipment.

Staying Power Required: The gantry crane had to be held in position for several hours

In order to ensure that they would be able to lift the 45-m-long, 15-m-tall, 58-tonne girder, the two cranes were configured with a main boom and 140 tonnes of counterweight. Once set up this way, they were ready to lift the load to a height of 15 meters and rely on their high precision to swing it to the exact position that had been planned for it. There, an additional telescopic crane was used to fully assemble the gantry crane while the latter's girder remained suspended in the air. This meant that the Terex Demag duo had to keep the load perfectly in place for several hours. “Keep in mind, however, that the two cranes and their booms are characterized by outstanding stability, so this didn't pose a problem at all,” report crane operators Günther Mühleck and Steven Zillmann. This enabled the Wiesbauer team to assemble the gantry crane in two working days as scheduled and complete the project to the customer's full satisfaction.