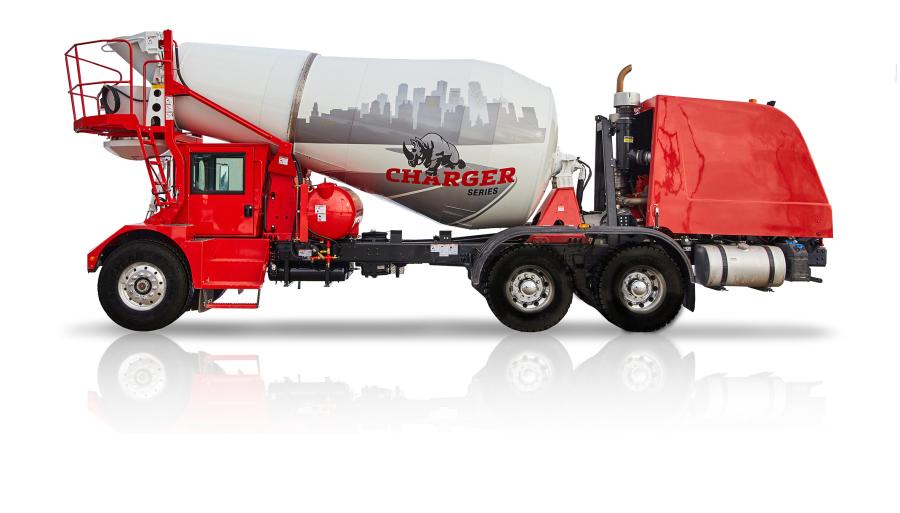 “Some producers have a front discharge fleet for rural and off-road deliveries and rear discharge fleet for city deliveries. We conducted extensive voice of customer interviews and found that there were some design elements of our traditional design that weren't required for and, in some cases, hindered delivering concrete in urban environments,” said Mark Aubry, director of customer engagement at Terex Advance.

“We approached the Charger truck design differently. We looked at the truck as a mobile mixer platform and designed it to optimize specific targets such as height, wheelbase and payload,” David Grabner, director of engineering of Terex Advance, added.

The city-class Terex Advance Charger series competes with and offers a more effective solution than rear discharge mixer trucks, according to the manufacturer. It gives producers all the advantages offered by the front discharge design — driving directly into the job site, quickly discharging the load from the operator's cabin, eliminating the chute man and delivering up to one extra load of concrete per day. The series also addresses several expectations of producers to compete with rear discharge trucks for city deliveries — lower charge height, more compact wheel base, lower weight and competitive cost.

“Often, ready mix producers would have to raise the discharge height of the ready-mix plant in order to accommodate front discharge mixers,” said Aubry. “The new Charger design eliminates this need and expense for producers.”

“However, we made some adjustments to the frame and engine selection to maximize truck payload,” said Grabner. “Throughout our new product development process, we were able to substantially lower the three-axle Charger truck weight when compared to our traditional three-axle mixer. This allows us to have a payload of up to 10 cu. yd. in a city-class front discharge mixer.”

Through use of innovative design and production techniques, the new Terex Advance Charger series of front discharge mixer trucks are priced competitively to comparable rear discharge mixer trucks, according to the manufacter. At the same time, these new trucks deliver all of the quality and feature advantages for producers, contractors and drivers as traditional Terex Advance trucks. This includes the Terex-exclusive Total Control System, which combines on-site truck travel and all mixer drum functions into a single joystick control for more accurate and efficient concrete load placement at the job site.