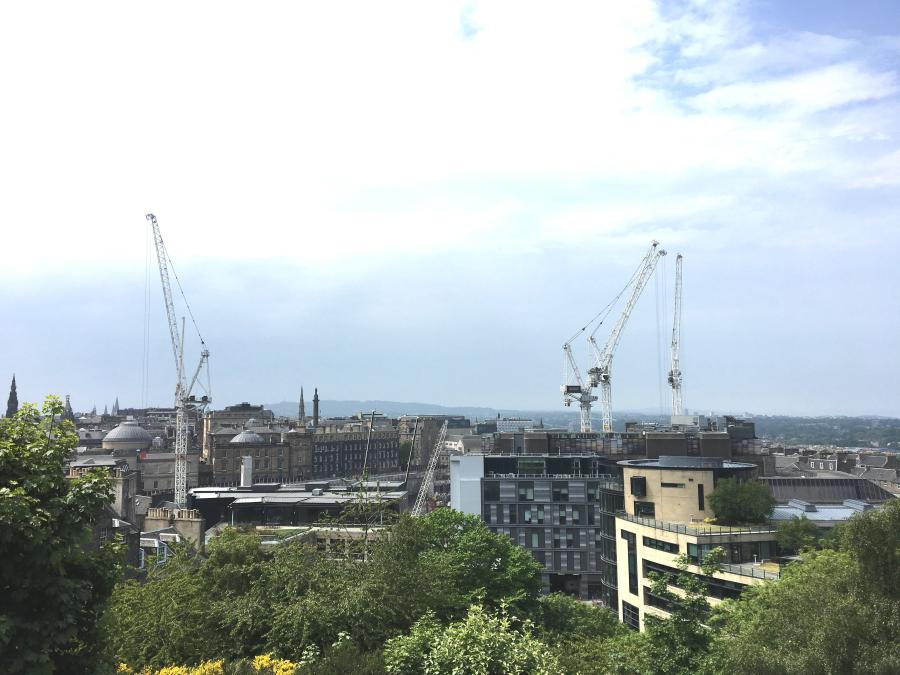 The large Terex CTL 1600-66 has a twofold task here: It is not only used for construction work, but also was used for setting up its four smaller “Terex family members” of the type CTL 430-24, which it will dismantle after completion of the project.

"A building that will help change the appearance of architecture in the UK" — with this ambitious claim, international construction and engineering company Laing O'Rourke is building the St. James Shopping Centre in the heart of Edinburgh, which, once completed in 2020, will accommodate 85 shops, 150 apartments and a 12-story luxury hotel. Cranes used are of crucial importance for the timely execution of this major project. The crane service provider Select Plant Hire is thus counting on the performance and efficiency of its Terex luffing jib tower cranes.

"Very powerful cranes are required to accomplish this enormously demanding construction project. We rely on a mix of different types in order to achieve maximum efficiency in terms of performance and cost-effectiveness in all areas of the construction site," explained Work Winning Leader Eddie Carr (Select Plant Hire).

The large Terex CTL 1600-66 has a twofold task here: It is not only used for construction work, but also was used for setting up its four smaller "Terex family members" of the type CTL 430-24, which it will dismantle after completion of the project.

For one thing, this dual function is an advantage in terms of calculation, as it renders the use of a mobile crane superfluous. For another, the Terex CTL 1600-66 made it possible to set up the remaining cranes at the most favorable positions on the construction site, which would not have been accessible for a mobile crane due to the limited space available.

Transporting the Terex CTL 1600-66 crane from the Select Plant Hire depot near Cambridge, more than 310 miles away, to the construction site required a total of 25 transport trucks.

"The logistics and setup of the crane in the center of Edinburgh with its dense and high buildings presented real challenges," said Operations Leader Mick McKeon (Select Plant Hire). The crane components, including the anchorage base, had to be transported through the busy city center during regular working hours — so adherence to the planned timeframe for setup was dependent on a meticulously developed plan that had to be strictly followed. Matters were complicated further because setup took place in December — with correspondingly few hours of daylight and uncertain weather, although time reserves were planned to take this into account.

"All this made the setup a major challenge", said McKeon.

For this reason, Select Plant Hire deployed two four-persons setup teams to assemble the CTL 1600‑66. This ensured that despite the adverse conditions, after only five days in December 2017, the crane was ready for lifting on the construction site with a tower height of 15.6 ft. (47.7 m) and a maximum jib length of 246 ft. (75 m).

"With this configuration, the crane completely covers the required working radius while offering high lifting capacities throughout the working area, which is a prerequisite for rapid construction progress," explained McKeon.

The CTL 1600-66 was able to demonstrate its enormous performance capability when it set up the other Terex cranes: "The heaviest components to be lifted were the slewing units of the cranes, which weighed 26.5 t with cab and platform," said McKeon, who is very confident about how the project is proceeding. "We know that the Terex tower cranes deliver their high performance very reliably in the long term and we are confident that despite the tight schedule for the project, we will meet out deadlines."