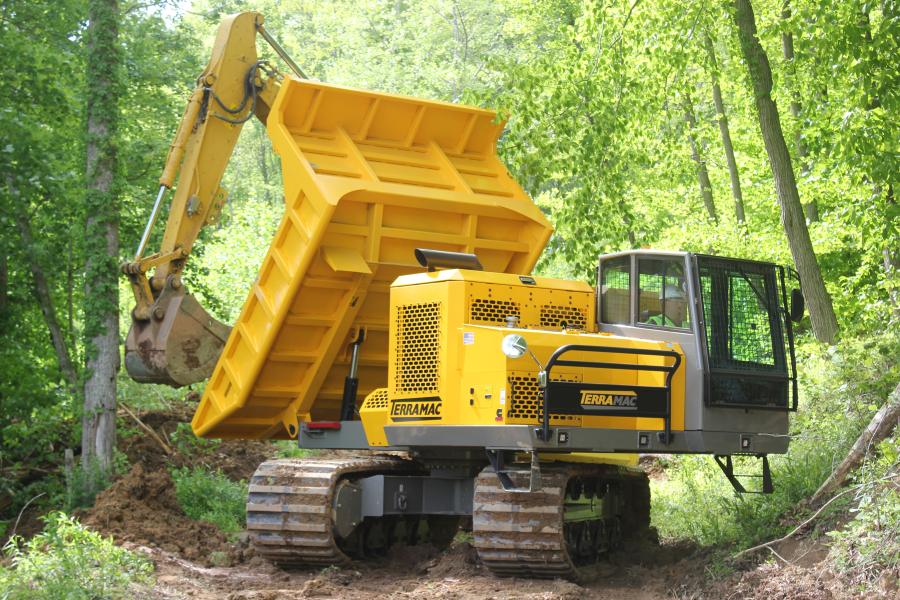 Shafer Equipment provided a demo of the Terramac RT14R in a confined space at its tow and show event in Clendenin, W.Va.

Terramac recently wrapped up its successful RT14R Tow & Show. Terramac partnered with its North American dealer network for the one-of-a-kind event to showcase its new 360-degree rotating unit to current customers and prospects throughout the United States and Canada.

During the eight-week tour, the RT14R made its debut at nine dealer locations, one expo and several private end-user demos. Each event was attended by contractors from a variety of industries, including: pipeline, utility, railroad, municipal, paving, environmental, logging and general construction. Attendees were educated by Terramac representatives on the RT14R's features and benefits, given complete walk-arounds of the new model and participated in live demonstrations.

“The RT14R Tow & Show enabled us to introduce our rotating crawler carrier to hundreds of end-users within a short period of time,” said Matt Slater, director of sales at Terramac. “Experienced operators expressed enthusiasm for having a rotating carrier available to the market, while others were intrigued by RT14R's additional capabilities and innovative design.”

“We took full advantage of the RT14R Tow & Show by hosting three events for our customers,” explained Mike Lester, vice president at Groff Tractor. “Dozens of end users showed up at each event, eager to see the new RT14R in action. Contractors from numerous industries were instantly enthralled by the unit's capabilities and have already begun planning for how they intend to incorporate Terramac's RT14R on upcoming projects.”

“The time saved adds up quickly when you factor in how many loads are being hauled on a daily basis,” said Jesse Whittaker, Terramac regional sales manager. “Users at the tow and show events loaded and unloaded the unit at various dumping angles to experience its benefits first-hand. Discussions about rentals and purchases are under way which proves the RT14R is in high demand.”

Manufactured in the USA, the RT14R is built with a rotating upper frame. The Terramac RT14R can carry and dump up to 28,000-lb. of material at any position, allowing it to offload materials faster than a standard straight frame unit, according to the manufacturer.

Equipped with tracks that don't need to be counter rotated the RT14R dumps material without tearing up the ground, reducing environmental damage and land restoration costs. The 40,000-lb. machine also is powered by a QSL9.0 320-hp Tier IV Final Cummins diesel engine to boost jobsite productivity while remaining highly fuel efficient. And, its minimal 7.9-psi ground pressure while fully-loaded enables it to conquer soft or wet ground conditions and mountainous terrain.