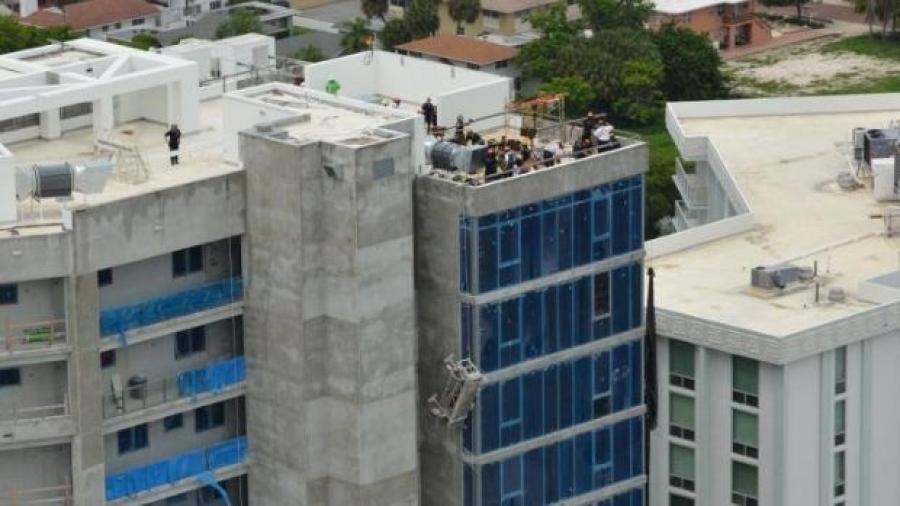 A Sarasota construction worker survived a harrowing incident 15 floors up on the outside of a building when a line holding a scaffold he and another worker were standing on snapped. (WWSB photo)

A Sarasota construction worker survived a harrowing incident 15 floors up on the outside of a building when a line holding a scaffold he and another worker were standing on snapped, leaving him hanging in his harness for an hour on a dangling scaffold before a daring rescue lifted him to safety.

The second worker who also was on the scaffold when the line snapped was able to be rescued by his construction workmates prior to the fire department arriving on the scene, said Fire Chief Michael Regnier of the Sarasota County Fire Department.

A 911 call at 11:30 a.m. Sunday, June 11, sent the High Angle Rescue Team from the Sarasota County Fire Department racing to Vue Sarasota Bay, a luxury condominium under construction on Bayfront Drive near the Ringling Causeway.

It took an hour for the unique team, which specializes in rescues on tall buildings, to send a man rappelling with a lifeline from the 17th floor roof of the under-construction tower to grab hold of the victim and have the rest of the team both pull both men back up to the roof by way of ropes, Regnier said.

Regnier had no immediate information on the condition of the victim, who was immediately taken to the hospital for observation following his ordeal.

“I can tell you that he was very, very frightened and, at the end of the ordeal, I was told he was crying,” Regnier said.

Firefighter and paramedic Paul Zaller, 38, who lives in Myakka City and is a member of the Sarasota County Fire Department High Angle Rescue Team, was the man who grabbed the lifeline and rappelled over the roof of Vue Sarasota Bay.

“I talked to the victim all the way down to him,” Zaller said. “He was very scared.”

It was the first time that Zaller had used his High Angle Rescue Team training on a live incident.

“I just feel happy that every bit of the training we did came into play,” Zaller said. “Our team worked together perfectly.”

On Sunday, the horse was Sarasota firefighter Jason Wilkins, a very strong man who was soaking wet with sweat.

“Jason and the rest of the pullers were amazing,” Zaller said. “They are the ones who really get the credit.”