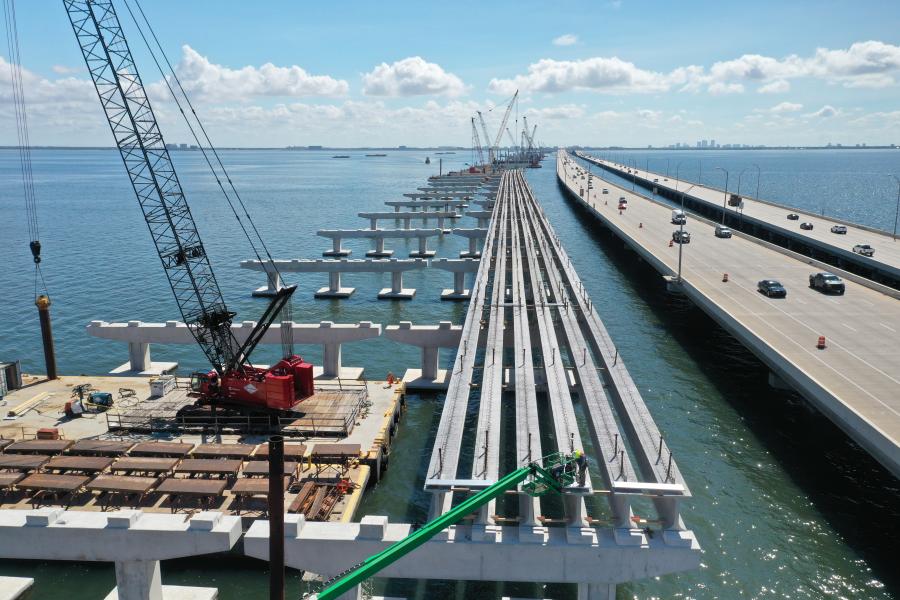 “The lengths of the piles are almost impossible to predict,” said Bill Jeffries, project administrator, HFB Replacement. “For example, we have had a pile in a footing achieve capacity at 72 feet, and the pile next to it, six feet away, did not achieve capacity until 220 feet.” (Florida DOT photo)

More than 80 barges and two dozen cranes dot the watery landscape, as construction crews continue work on Florida's $865 million Howard Frankland Bridge (HFB) replacement project. The new bridge is being built to the north of the current southbound bridge and will consist of eight lanes that include four general purpose lanes, two northbound express lanes, two southbound express lanes and a bicycle/pedestrian path. The existing southbound bridge will be converted to become northbound I-275, and the existing northbound I-275 bridge will be removed as part of the multi-year effort. 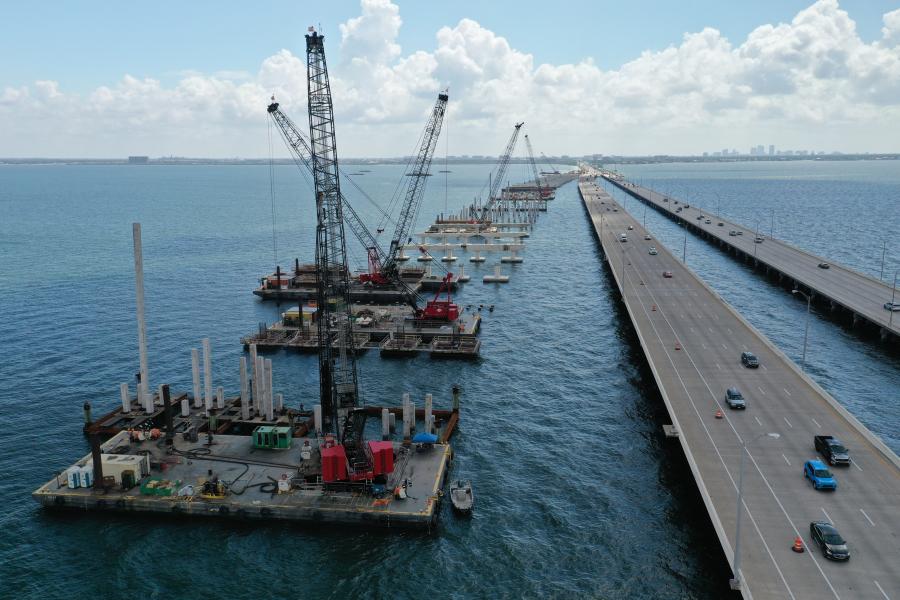 "While navigating the numerous entities and agencies that are involved does present a challenge, this JV [a joint venture between Archer Western and Traylor Bros.] and Atkins team are both well suited for the task," said Bill Jeffries, project administrator, HFB Replacement. "Like any project, we have had our obstacles, but it's coming along nicely.

"As part of the department's large work program for the area, this project will add much-needed capacity for the entire region. We are proud to be delivering this high-profile project for the Florida Department of Transportation [FDOT] and the residents of Tampa Bay."

The aging HFB provides a crucial link between Pinellas and Hillsborough counties and serves as the central bridge spanning Old Tampa Bay from Clearwater/St. Petersburg to Tampa. The structure is the most traveled of the Bay Area bridges, carrying an average of 179,5000 vehicles per day across Tampa Bay. It is one of three bridges connecting Pinellas and Hillsborough counties, the others being the Gandy Bridge and the Courtney Campbell Causeway.

According to FDOT, the new bridge design will improve incident management in emergency response situations, addressing safety concerns raised by the community during the outreach process, including hurricane evacuations.

"Currently, the project is anticipated to finish in late 2025," said Jeffries. "However, there are still many potential impacts to the project schedule outside of the contractor's control, such as hurricane seasons and material shortages."

Jeffries noted that, to date, the project has had little impact on the motoring public.

"In the future, there will be shifts in traffic patterns to accommodate different phases of the project. This team and our media partners do an excellent job making sure those changes are seamless, and that motorists are notified ahead of time."

The biggest challenges tied to the project involve foundation installation, due to the highly variable subsurface geology.

"The lengths of the piles are almost impossible to predict. For example, we have had a pile in a footing achieve capacity at 72 feet, and the pile next to it, six feet away, did not achieve capacity until 220 feet."

Jeffries noted that weather and safety are the primary concerns. 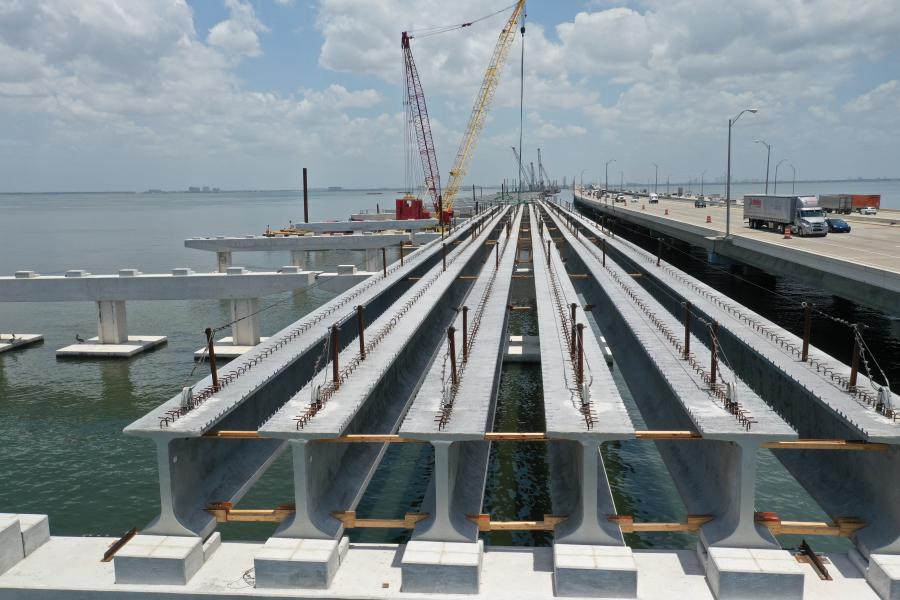 "The project has a robust severe weather management plan that's implemented for tropical storms and hurricanes to not only protect our assets, but the existing bridges, as well. Project management is constantly watching the weather every day to ensure the safety of our workforce. We use multiple weather alert systems to halt work activities for thunderstorms and high-wind events."

There are more than 1,700 girders and 2.7 million sq. ft. of bridge deck to construct. Currently, causeway embankment construction is taking place, along with foundation installation, substructure construction, superstructure girder erection and roadway construction on the Pinellas Causeway.

Regarding pedestals, pier caps and piling and footings, said Jeffries, "There are a lot of them. These elements are cast-in-place with concrete being delivered from the existing southbound bridge and conveyed to the point of placement with concrete buckets and cranes.

Jeffries noted that pile and girders are being transported by barge to the job site from manufacturing facilities along the bay, south of the project. Prefabricated reinforcing steel for substructure elements also are moved by barge to their installation location. Concrete for substructure items, such as footings, columns and caps, is being delivered from the existing southbound bridge and conveyed to the installation point by crane and bucket.

As for converting the existing southbound/westbound (Tampa to St. Petersburg) bridge to the new northbound/eastbound I-275 (St. Petersburg to Tampa), the new bridge will be opened to southbound traffic in two years.

Jeffries said foundation construction is the most time-consuming part of the work. 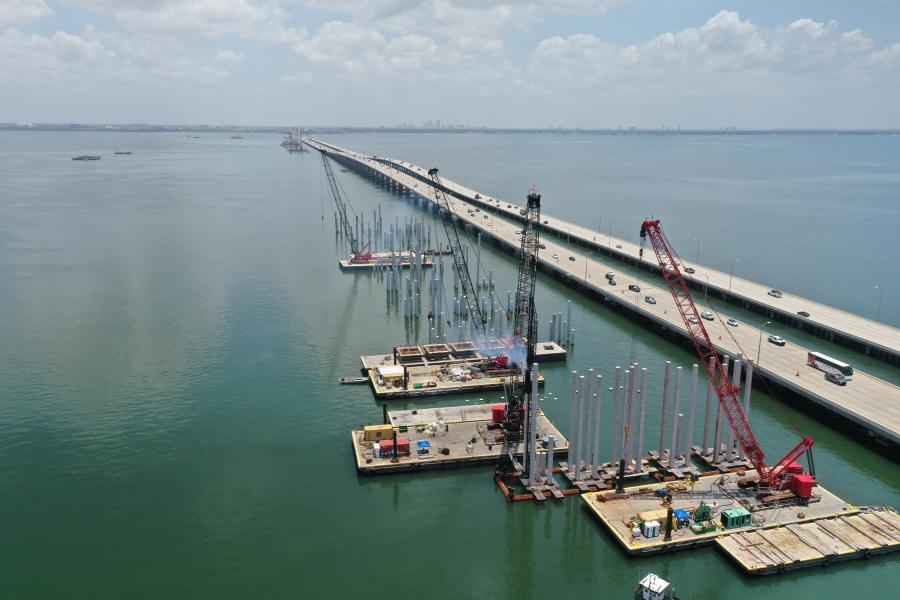 The bicycle/pedestrian path will include four overlooks and aesthetic features that will be located at each end of the bridge and on the overlooks.

"Our portion of the path will be finished at the completion of the project, which is expected to be the end of 2025."

The hours can be long and there is still a significant amount of work remaining, but for Jeffries and the rest of the team, the investment is well worth it.

"It is definitely a highlight in most of our careers to be able to deliver a signature project of this stature to the residents of the Tampa Bay area." CEG