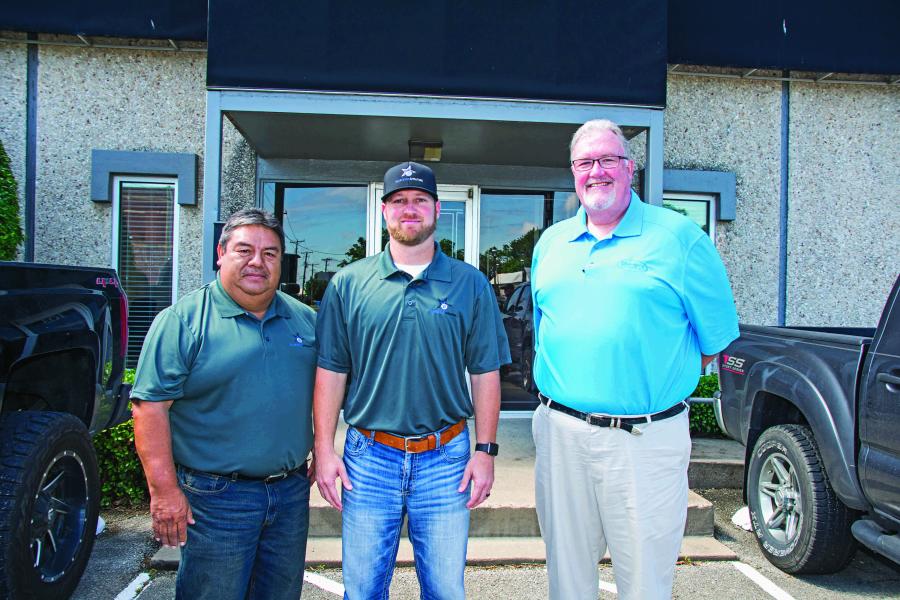 Blue Star Utilities Owners Jose Guamancela and Steve Hugdahl meet with Kirby-Smith Machinery Territory Manager Bill Hitchcock at Blue Star’s office in Mansfield, Texas. “Bill and Kirby-Smith stepped up and were willing to help us grow, so we purchased three packages from them and have three more on rental purchase option.”

When Steve Hugdahl and Jose Guamancela teamed up to form Blue Star Utilities, LLC, one of the first things they did was approach some developers to let them know they were starting a new business for installing underground water, storm and sewer lines.

“They asked us what took so long,” recalled Hugdahl. “Jose and I had built a reputation for meeting customers' schedules and providing quality service with other companies we worked for. The developers were confident that we would deliver the same with this company, so they sent some business our way.”

Hugdahl's and Guamancela's backgrounds included stints with several construction companies before they started Blue Star Utilities in February 2016. During the prior decade they were at the same firm – with Hugdahl in the office directing company operations and Guamancela running field crews.

“We decided to keep that same structure with Blue Star,” said Guamancela. “Steve handles estimating, securing and scheduling jobs, and I oversee them. We complement each other, and that's proven to be a good recipe for success. In less than two years, we went from a handful of workers doing small residential installs to a staff of nearly 90, who can handle large, complex projects involving thousands of feet of pipe and associated structures.”

In addition to laying pipe, Blue Star Utilities puts in storm junction boxes, manholes and other utility items. The company runs four concrete crews who can form and pour unique structures such as headwalls. At the outset, Blue Star mainly concentrated on residential subdivision and municipal markets within roughly a 100-mile radius of its home base in Mansfield, Texas.

“Residential tends to be new construction such as putting in mainline water, storm and sanitary lines as well as running services from that to within 10 ft. back from the curb,” said Guamancela. “Our municipal focus is also primarily on new construction, although it generally involves installs that are bigger, deeper and more complex. On some of those municipal jobs, we have to tap into an existing line in the street, which involves pavement removal and replacement.”

On both residential and municipal work, Blue Star Utilities serves as a general contractor. Municipal work is hard-bid, while residential is often negotiated. The firm usually has around 10 projects in various stages of development going at any one time.

“One of our strengths is the ability to provide turnkey projects as a prime,” said Hugdahl. “We decided before going into business that we would sub out as little as possible. That way, we don't have to wait on someone to get to our job, giving us full control of the schedule. Our customers appreciate that, and we believe this has helped us gain and keep a solid list of repeat clients.”

It was one of those customers who gave Blue Star Utilities its start, a residential water and sewer install on Mahard Parkway, in Prosper. It called for approximately 1,000 ft. of water line and a similar amount of storm sewer.

“I budgeted it to take about 14 days, and Jose and his guys had it done in less than half of that,” Hugdahl recalled. “Jose asked me where I was going to send them next. The same developer had another project for us, so the crew went there immediately.”

Big Leap From Job One to Job Two

The second job was more lucrative than the first. Blue Star Utilities put in nearly 8,000 ft. each of water and sanitary sewer, in addition to nearly 5,000 ft. of storm sewer for a residential subdivision in McKinney.

“We went from doing a $167,000 job to a $1.5 million project,” said Hugdahl. “Fortunately, a good core group of field guys came with us from the other company that Jose and I worked for. They know how to handle any application or challenge. Even though we are a young business, we have years and years of experience.”

Blue Star Utilities is always looking for new staff members and gives them a chance to move up in the company, which actively promotes from within. It has a strong training program as well.

“Jose and I agree that building a culture of safety, solid and quality work practices as well as outstanding customer service is a good foundation for success,” said Hugdahl. “We grew quickly, but we did it in a way that didn't overextend us, which is very important in our eyes. We consider everyone here a key employee.”

The Blue Star Utilities owners sought rapid growth, which meant acquiring a large number of machines in a relatively short time. They started with one brand of equipment, but quickly switched to Komatsu excavators and wheel loaders, purchasing them from Kirby-Smith Machinery with the help of Territory Manager Bill Hitchcock.

“We thought that the equipment dealer we bought our initial pieces from was reluctant to take a chance on a newer company,” said Hugdahl. “Bill and Kirby-Smith stepped up and were willing to help us grow, so we purchased three packages from them and have three more on rental purchase option.”

A package for Blue Star Utilities consists of a PC240LC 11 excavator and either a PC360LC-11 or PC490LC-11, as well as a WA320-8 or WA380-8 wheel loader. Crews use the excavators to dig trenches, set pipe and structures and backfill. They also backfill with the loaders, in addition to moving pipe and materials.

“I ran Komatsu in the past, so I knew the quality and dependability,” said Guamancela. “Trench size and depth, as well as how big the pipe and structures are, determine whether we use a PC490 or PC360. We often attach a compaction wheel to the PC240s to pack down backfill materials. All have good power and are productive and efficient. The same can be said for the loaders. We also match those to the job the same way we do with the PC360s and PC490s.

“We like that Kirby-Smith takes care of these Tier 4 machines with routine services for the first 2,000 hours or three years with Komatsu CARE,” he added. “Our costs are fixed, and we don't worry about whether they are completed on time. Kirby calls us when a machine is due for service and does it at a convenient time that minimizes downtime.”

About the Right Size

Within a couple of years, Blue Star Utilities has already grown to nearly the size that Hugdahl and Guamancela envisioned when they began discussing the idea of going into business together.

“Our expansion has been extremely fast, and we want to take time to assess where we are and where we want to go from here,” said Hugdahl. “Our focus will likely remain on the residential and municipal markets. If the right commercial job came along, we would consider it, but we like to stay with what we know best.”

Hugdahl added, “We may grow a little more, possibly with another utility crew and an additional concrete crew. It's important to us to continue providing a high level of service to our customers and getting too big or spread out could jeopardize that. It also keeps us from having full control of our projects. When you see one of our jobsites, you know it is Blue Star's because everything is neat, organized and running smoothly.”