'The Gallery at Kenwood' in Cincinnati Pressing Forward 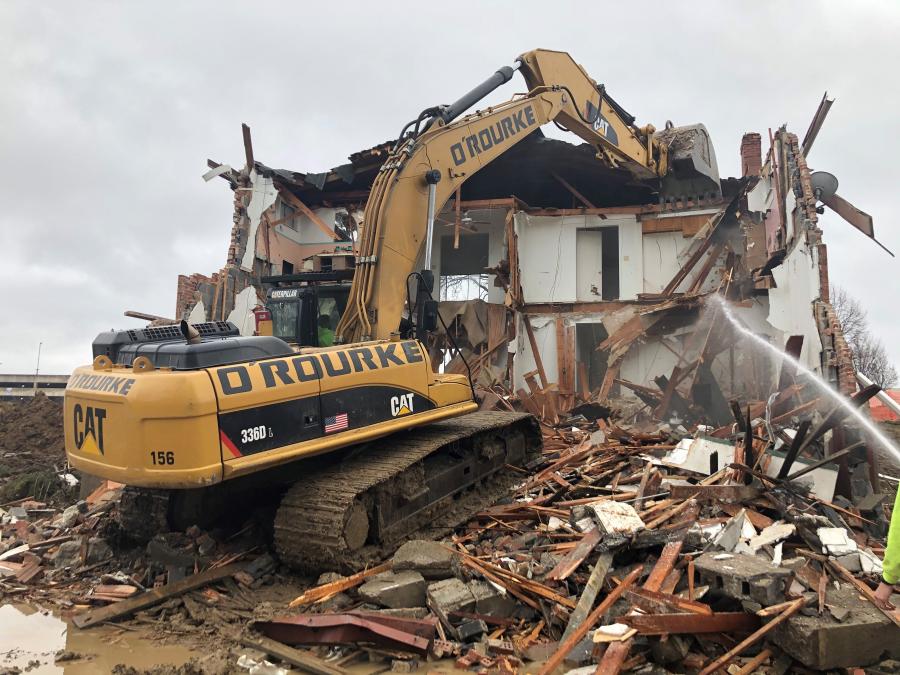 “It’s a wet site and we’ve had a tremendous amount of freeze-thaws in the Midwest this winter season. It’s a lot of moisture and mud and it’s been tough to keep the tracks cleaned and everything maintained,” said Jeff Sizemore, O’Rourke Wrecking’s project manager.

The demolition of 22 two- to three-story apartment buildings on the block bound by Kenwood Road, Happiness Way and Festive Court, a 10-acre site, began in the northeast section of downtown Cincinnati in late January to make room for the construction of the Capital Investment Group LLC's (CIG) $130 million project — The Gallery at Kenwood.

The project contains several components: a 115,000 sq.-ft. Class A rectangular-shaped office building; a six-story, 130-room, glass clad (curtainwall) hotel with a ground floor restaurant; a luxury apartment building with 248 units (studio, one, two and three bedrooms); and a five-story parking garage with 280 private parking spaces and 633 public parking spaces, which The Port of Greater Cincinnati Development Authority is providing much of the financing for. 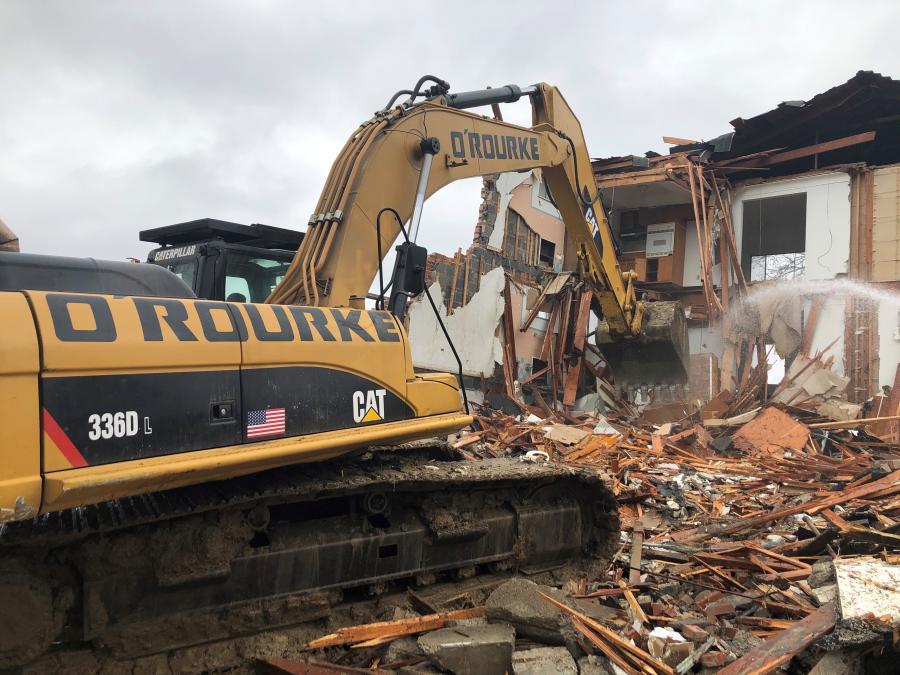 "This project has been a long time in the making and we appreciate the hard work from all of the stakeholders that have been involved in the project, including the neighborhood, Sycamore Township, the Port and Hamilton County," David Bastos, CIG's president, said in a press release about the project. "These large mixed-use developments require both a huge time and financial investment by all stakeholders and we very much appreciate all that everyone has done to make this project a reality."

Gregg Fusaro, regional partner of CIG, also stated in the press release, "Kenwood is the number one suburban office and retail sub-market in the entire region and we are excited to have this transformative development be part of the continued success of the corridor."

CIG is in the midst of negotiating with hotel operators to develop the hotel site and that should start in late summer. According to CIG's press release, these luxury apartments will be the first to be constructed in the Kenwood area in nearly 60 years. The Gallery at Kenwood, when delivered, is anticipated to generate more than $160 million in economic impacts, as well as 864 permanent jobs and close to 870 construction jobs.

The CIG project is the latest massive development in the area. It will be joining Montgomery Quarter and The Neighborhoods at Summit Park.

The area being demolished is surrounded by commercial to the south, a hospital to the north and a large shopping center, one of the premier destinations in the city, to the east.

Jeff Sizemore, O'Rourke Wrecking's project manager, is well aware of the challenges associated with the operations.

"Because of the expediency of the schedule, we have to work on multiple buildings simultaneously," he said. "We're also in a residential neighborhood and directly adjacent to a hospital — we had to be cognizant of the noise as we remove the debris and still maintain all the roads, driveways and accesses to ensure that we don't truck mud and fugitive debris outside of our site. The biggest challenge is just to be good neighbors by utilizing best management practices and being professional."

So far 18 buildings have been demolished.

"But in most cases, we're leaving the foundations and footers to the end," said Sizemore. "A lot of items were salvaged from the buildings before we started. Because a newer style of brick was used for their construction, it doesn't salvage well, but everything else — doors, appliances and other interior items and materials — were taken out. The buildings are a combination of several types of construction, with the majority being a masonry exterior and wood framing interior. There were a few all-wood structures. It's a unique job because so many structures are in close proximity."

To ensure a safe work site, O'Rourke was in touch with various utilities — gas, electrical and water — to make sure that everything was turned off. Maps for underground infrastructure were double-checked with various authorities.

Access to the work site is based on a primary entrance and a secondary one with two different accesses. 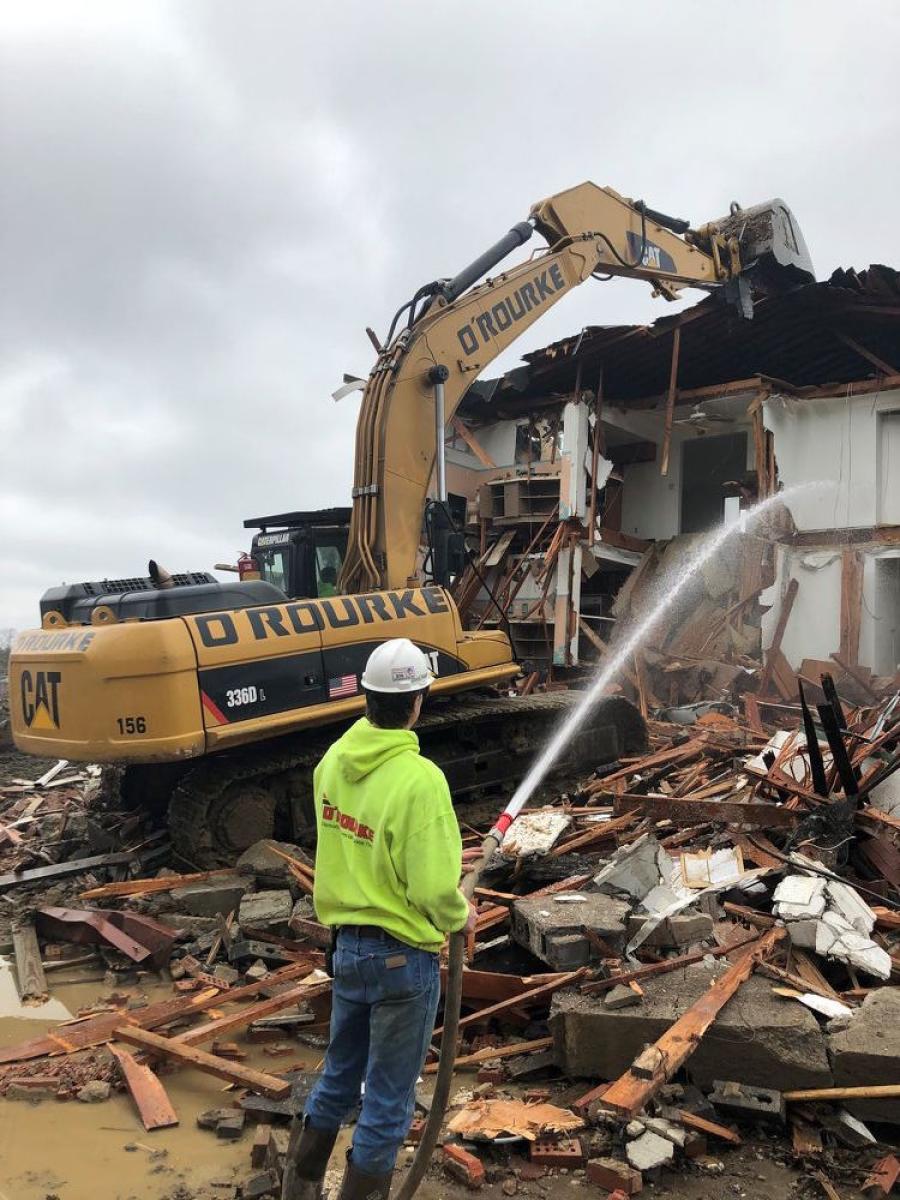 "Actual demolition of a building is accomplished in a few hours, the sorting and segregating of the debris is probably a whole day, and then the load out takes a couple of days," said Sizemore. "It's a couple of days to take care of the foundations."

O'Rourke is self-performing all the work, and peak days have six-plus employees on-site. Sizemore expects that about 15,000 cu. yds. of debris will be removed.

"By weight," he said, "most of the material will be recycled."

"With the freeze-thaws and the colder weather, it's being aware and keeping the tracks shoveled out," said Sizemore. "It's a wet site and we've had a tremendous amount of freeze-thaws in the Midwest this winter season. It's a lot of moisture and mud and it's been tough to keep the tracks cleaned and everything maintained. Even greasing the machines at this time of year is rough; and because of the cold temperatures, you have to allow for an adequate time to warm-up the machines in the morning before taking off like a cowboy."

O'Rourke has one equipment yard 15 minutes from the site and another 45 minutes away, which means that mechanics can easily be dispatched to the site to do repairs.

"We coordinate with our equipment vendors frequently and interact about what our upcoming needs are going to be from an equipment standpoint," said Sizemore. "We make sure that we develop rapports with our salesmen and maintenance personnel who assist in the field and the shops. A lot of what we do depends on the equipment working and being able to utilize it on a daily basis — it has to be dependable and durable and we can't afford a breakdown. If something does break down, we need to get it back into service ASAP."

A fast-tracked project such as this one requires a team effort ranging from people in the field and the truck drivers to the office support staff, including business development and estimating.

"The efforts have been fantastic," said Sizemore. "The schedule is very aggressive and the guys on-site are working 10-hour days, six days a week for the duration of the project. Everybody's been supportive to ensure that we're successful and deliver on-time." CEG