The Growth of John Deere 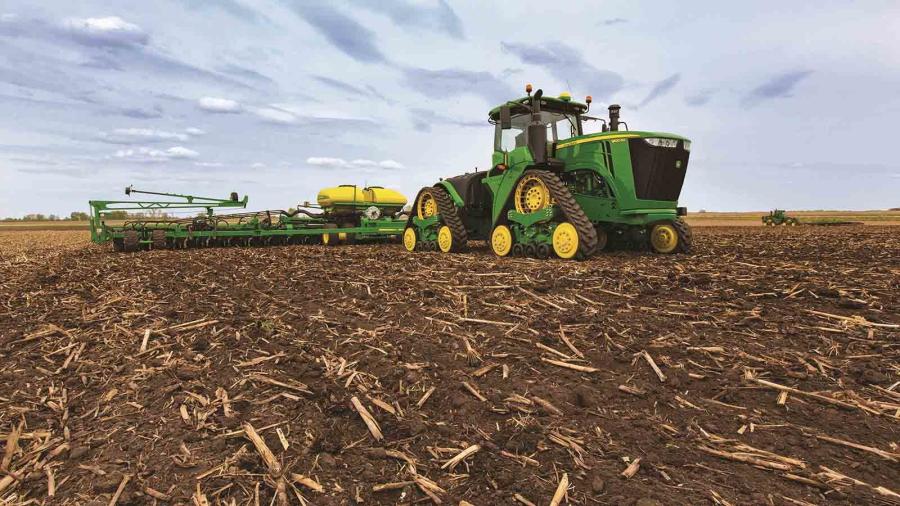 The first of the four-track Deere products rolled out in 2015, the 9RX.

If someone looks back on the early years of John Deere — the man and the 100-year-old tractor company he founded — and exclaims, “How quaint!” that person has backed over and badly damaged his hindsight. Things always look easier in a rearview mirror.

Yes, a 20-horsepower, steel-lugged John Deere Model D of 1924 is almost toy-like compared with Deere's huge new 620-hp Model 9620R, a 30-ton behemoth with an articulated middle section and eight fat, heavy-treaded tires to propel it. Now that's a tractor! Yet the truth is, so was the D model. John Deere has been at or near the forefront of tractor development for a long time.

“I would say that at John Deere, innovation never stops,” said Tiffany Turner, product marketing manager for large Deere tractors. “We constantly are asking, 'How do we need to grow and expand?' We continue to look forward and to research technologies. Research doesn't stop in John Deere world.”

Spoken like a true believer, but then Turner grew up in that world, on a farm in northwest Missouri where a 96 PTO-hp John Deere 4020 looms fondly in her memory. She has been a Deere employee for 19 years and, as of early March, had already given 40-plus interviews about Deere's century of making tractors.

John Deere tractors are produced globally today, including plants near Pune, India, and in Ningbo, China. After a hundred years of building them (plus an additional 80 years designing and constructing farm implements and wagons), Deere has turned out some iconic pieces of equipment. Here's a quick look at some of them. 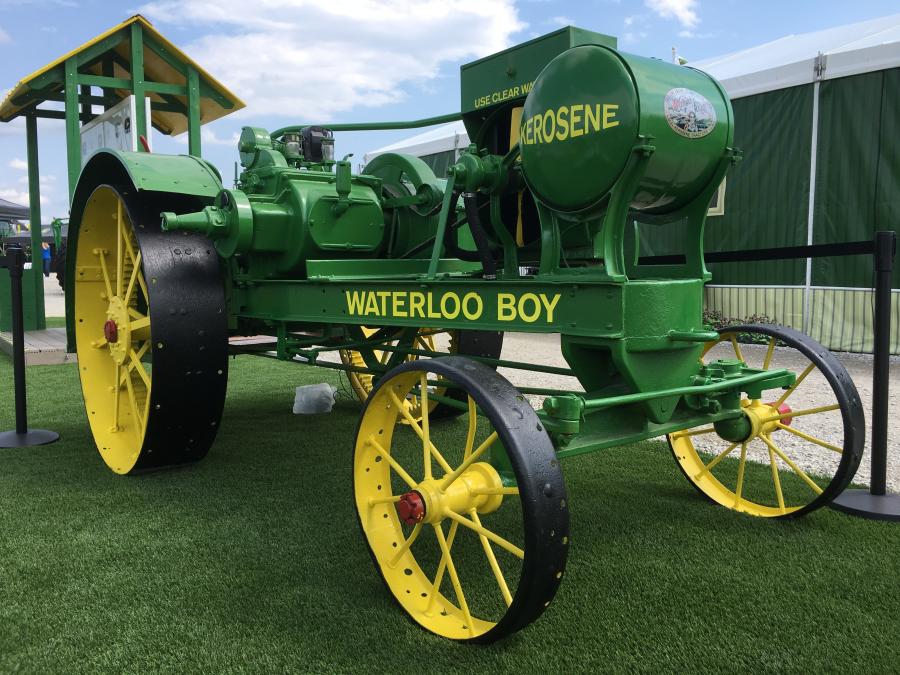 After dabbling with an all-wheel-drive tractor design, Deere in 1918 purchased the Waterloo (Iowa) Gasoline Engine Company, maker of the Waterloo Boy. The Waterloo Boy Model R was extremely popular — which was why Deere coveted it — and the tractor continued to be produced by Deere under the Waterloo name for another five years. It was an economy tractor, that is, a unit small and inexpensive enough to be afforded by small farmers. Prior to the Waterloo Boy, the only options for farmers were cumbersome steam engine-powered self-propelled machines. They didn't inspire farmers to quit using horses to turn soil and harvest crops. But they put their horses out to pasture for the Waterloo Boy, buying more than 5,000 of the tractors in the first year Deere owned the product. 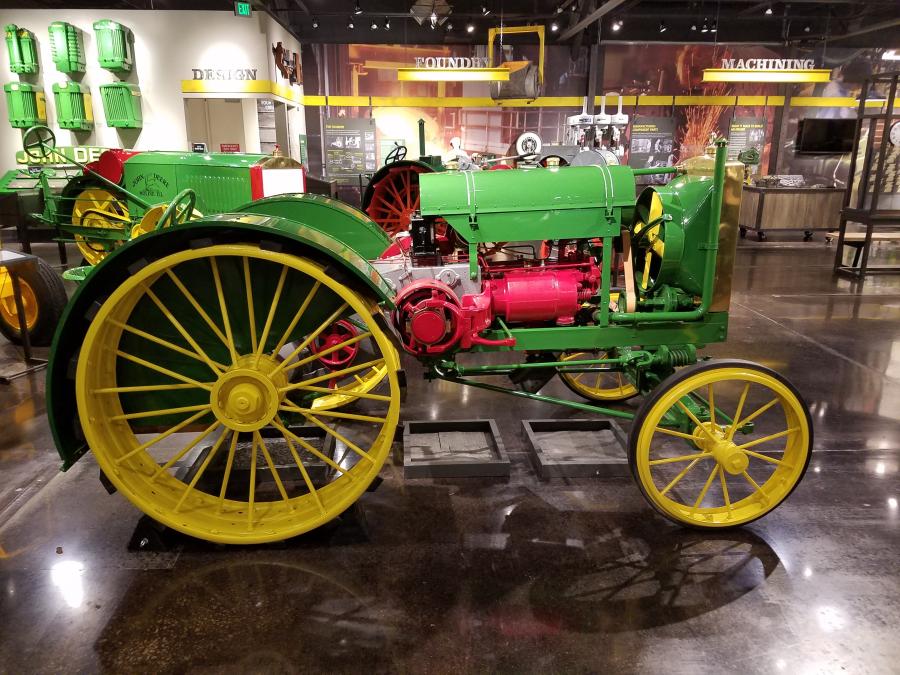 The 1923 successor to Waterloo Boy, this two-cylinder, kerosene-burning tractor produced 15-20 horsepower. It was immediately successful in the tractor market and remained a staple of the Deere equipment lineup for the next 30 years. The machine evolved, of course, during the years of its production. Over time, its engine horsepower was boosted and its steel wheels and lugs were replaced by hard-rubber tires. The tractor was by all accounts a rudimentary machine, but thoroughly workmanlike. 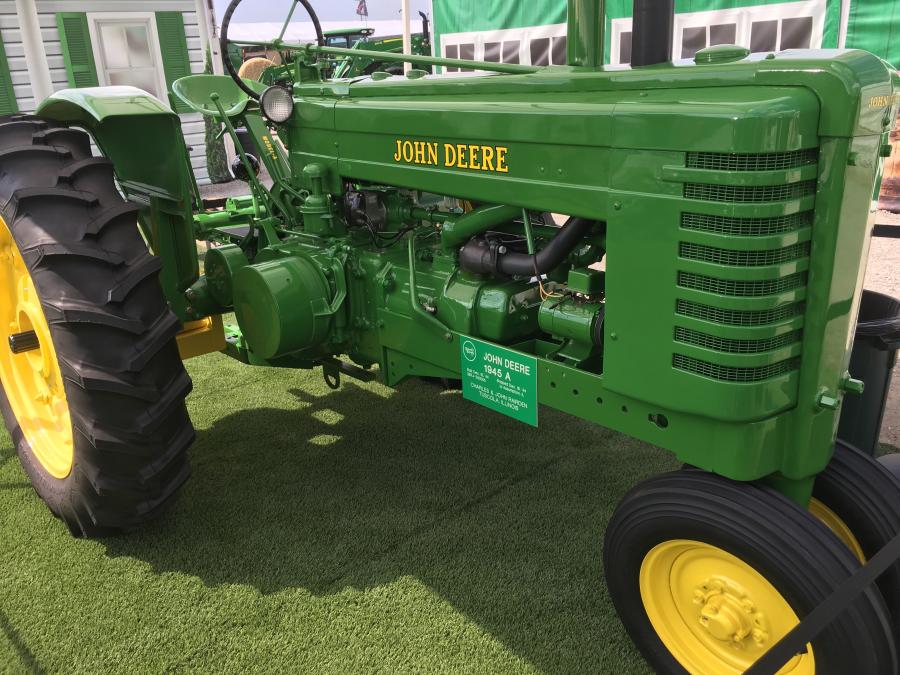 Not to be confused with the iconic Ford automobile, this A model was introduced in 1934. The A featured a narrow front-end tire configuration and easily adjustable rear wheels and specifically targeted row-crop field work (and the rival Farmall tractor). Its long-handled hand clutch was an idiosyncratic touch for the next 25 years. The tractor was powered by a Deere 28-hp two-cylinder engine, which had fewer moving parts than some engines in rival products and produced good low-end torque. The firing pattern of the two-cylinder engine also produced a distinctive popping noise rather than the smoother roar of four-cylinder engines, which led Deere tractors to be fondly labeled “Johnny Poppers.” The A (and a similar but smaller B model) was well received and remained a Deere mainstay for the next 18 years.

In 1960, Johnny Poppers were consigned to history's back forty. After several years of development, Deere introduced a “New Generation” of four- and six-cylinder engines to meet customer demand for more horsepower. The redesigned tractors also featured conventional foot clutches, improved hydraulics, an ergonomically designed operator platform, and hydraulic power brakes. The six-cylinder 4010 was the top of the line and came in at 84 hp. Three years later, a model 5010 rated at 106 hp was introduced and the era of big-engined ag tractors was fully under way. A few years later, the 10 Series tractors evolved into the 20 Series, with the successor 4020 model becoming one of the biggest-selling John Deere tractors of all time.

In 1973, Deere tractors became comfort centers for farmers who for too long alternately froze or sweltered at the wheel of tractors while working feedlots in winter and expansive fields in July. This latest generation of John Deere tractors featured Sound-Gard bodies, which were insulated enclosed cabs with rollover protection built in, a rounded windshield, heat and air conditioning, and speakers for an optional radio or 8-track speaker. These 30 Series models with an automobile-like operator space were recognition that ag machine operators were increasingly working larger acreages for longer stretches of time without interruption and needed some pampering to maintain the human component of productivity.

Four-wheel-drive tractors entered the lineup and then two-segment tractors with a pivot in the middle. Models rolling on two rubber tracks were introduced and then tractors on four rubber tracks. The first of the four-track Deere products rolled out in 2015, the 9RX. Its operator's cabin is suspended and can vertically move four inches, letting the operator float over the worst of the in-field jolting. A narrow-track 9RX was added to the lineup last August.

Determining which of these and many, many other John Deere tractors introduced over the past century were the most influential in the tractor market or iconic or historic in their own right is mostly a matter of opinion. “It depends upon the person you ask,” said Turner. The safe answer probably is each model was instrumental in meeting the particular needs of a segment of the tractor market. That market ranges all the way from the gigantic articulated tractors employed where fields can extend beyond the horizon down to little backyard lawn tractors — which used to be called lawn mowers — introduced in 1963.

Is there an iconic machine or feature being developed at the moment? Hovering tractors, maybe, or solar-powered ones? “At this point in time, there are no plans for solar power on current tractor models,” Turner said. “As research and development of the technology grows, we are looking at it.”

So, who is the “typical” Deere tractor customer in 2018? Is it a 10,000-acre, multi-generational farmer in some western state? Turner couldn't say, being reluctant to talk sales volumes of individual models. “We can help all customers. We can help the customer who needs to take care of his yard and the individual who has several people working for him and many acres to dress. Deere can meet all those tractor needs. We are there to take care of all of them.”

In every case, she continued, “we want an operator to experience the best usability he can. We take a lot of pride in that, in making sure an operator has optimum usability. That is where communication comes in between a manufacturer and its customers. It doesn't matter if it is the turf, construction, or ag division, our tractor customers all have specific needs and we want to meet them.”

As for the relationship of ag tractors and construction machinery, Turner noted with pride that the first of Deere's tractors, the Waterloo Boy, was used in the 1920s on the streets of the company headquarters city of Moline, Ill. The city fathers employed the Boy to pull road scrapers, perhaps the first construction application of the machine. The successor Model D was marketed as an industrial tractor in the 1930s. In 1947, Deere began to divide into machinery divisions with the opening of its mile-long Dubuque (Iowa) Works factory. It is the center for the manufacture of tractor kin, such as crawler dozers and some forestry industry products.

The company's tractor centennial celebration this year will include exhibits of old tractors at various Deere locations in the U.S. and abroad. The Smithsonian National Museum of American History has declared 2018 the Year of the Tractor and a Waterloo Boy is on display there. A celebration June 15-16 at the Moline headquarters and the city's downtown pavilion will feature live entertainment, lots of exhibits and, of course, tractors of every vintage. “Come and enjoy,” Turner said. “I think it will be a great weekend.”