The Lowdown on Gulfport's Mississippi Aquarium 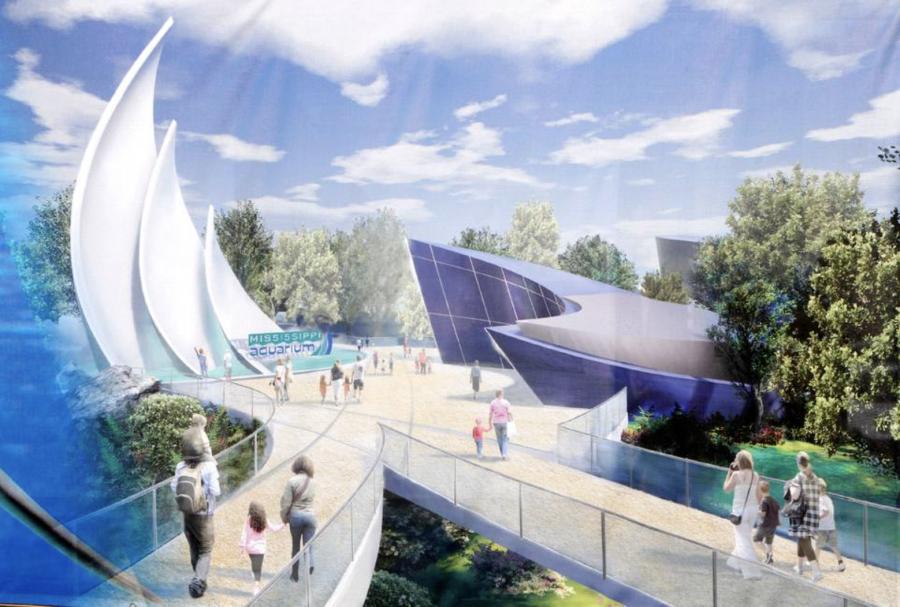 The $65 million Mississippi Aquarium planned for downtown will be unique.

The city unveiled the aquarium design to the general public Friday morning on the vacant site overlooking Gulfport's harbor. About 200 people gathered as Mayor Billy Hewes, Gov. Phil Bryant and others extolled the project's benefits.

Aquarium aficionado David Kimmel said the campus-style design and anchor outdoor exhibit will set apart Gulfport's aquarium. Most aquariums, consultant Kimmel said, are in one building, but the Mississippi Aquarium will be spread through four buildings, with an outdoor exhibit as the anchor, thanks to the Coast's mild climate.

PGAV Destinations of St. Louis, Mo., designed the aquarium to emphasize the Coast's natural environment of freshwater flowing into saltwater. On entry, visitors will see a river that can be viewed from above or below through acrylic walls, a feature throughout the outdoor and indoor exhibits. Otters, alligators and river fish also will swim in the river. A dolphin pool will sit at the opposite end.

The main three-level building, the Gulf Community Gallery, will have one body of water with a dozen different views. At the top will be a touch pool with a stingray exhibit. A shark exhibit with acrylic walls will surround visitors.

"What acrylic allows us to do," Kimmel said, "is get people immersed in the exhibit itself."

The campus also will include an entry building, an aviary and a support building to maintain water quality and other systems.

The city already has in hand the $40 million for construction and estimates another $20 million will be needed to acquire exhibit animals. Hewes hopes the funds will come from the Legislature, where a bill is pending. He said the money might come over time rather than in one lump sum, but the believes the city has stated a good case. Since 2008, he said, 70 percent of state bond money for museums and attractions has gone to the Jackson metro area, with only 10 percent making its way to the Coast.

A major fund-raising campaign is planned, with sponsorships available for exhibits and other opportunities for contributors. Contribution details should be available within the next two weeks.

Construction is expected to start in spring 2017, when engineering and other preliminary work is completed. Pre-construction costs account for $5 million of the total price.

Architect David Hardy of Coast firm Eley Guild Hardy, who also worked on the design, said the aquarium should be stocked with animals in the fall of 2018 and opened to the public in early 2019.

"Big projects are not for the faint of heart," Bryant told the crowd. Naysayers, he said, will insist the project won't be done.

"Just watch us," Bryant said. "We can do what we imagine . . . Not only do we want to do it -- we must do it. Can you imagine that we are on the Mississippi Gulf Coast without an aquarium?"

Bryant said he has pledged a $25,000 donation to the aquarium. He later told the Sun Herald the money might come from his campaign fund because he personally could not afford that size donation.

Hurricane Katrina destroyed Gulfport's privately owned Marine Life aquarium in the harbor, which had been enjoyed by generations.

The Mississippi Aquarium, Hewes said, could draw up to 500,000 visitors a year. He noted when he stood to speak that it was Good Friday. "I have to say, today will be remembered as Great Friday in Gulfport," Hewes said.

The aquarium property, more than nine acres in all, is owned by the city's urban renewal agency, the Gulfport Redevelopment Commission. GRC is soliciting proposals for a hotel on the property's northwest side. The aquarium will sit on 4.5 acres.

Once it opens, the aquarium will seek accreditation from the Association of Zoos and Aquariums, Kimmel said. The association sets standards for education and animal care, he said, assuring the quality of the aquarium.

The project also includes saving the old Gulfport library Katrina heavily damaged. Hewes noted residents did not want to see it torn down. Coast Transit Authority has secured $8 million for renovations. A transit station will be on the first floor, with aquarium offices and conference space also planned.

The aquarium property will for the first time connect downtown with Jones Park and Gulfport's harbor via a bridge across U.S. 90.

GRC's chairwoman, Carole Lynn Meadows, said the aquarium will be both a legacy and an investment made for future generations.

"This is exciting," Meadows told the crowd. "I am reminded of the words, 'Planting trees under which we will not sit.' "

For more information, visit the Sun Herald at http://url.ie/11nrq.