The Power of Promptness 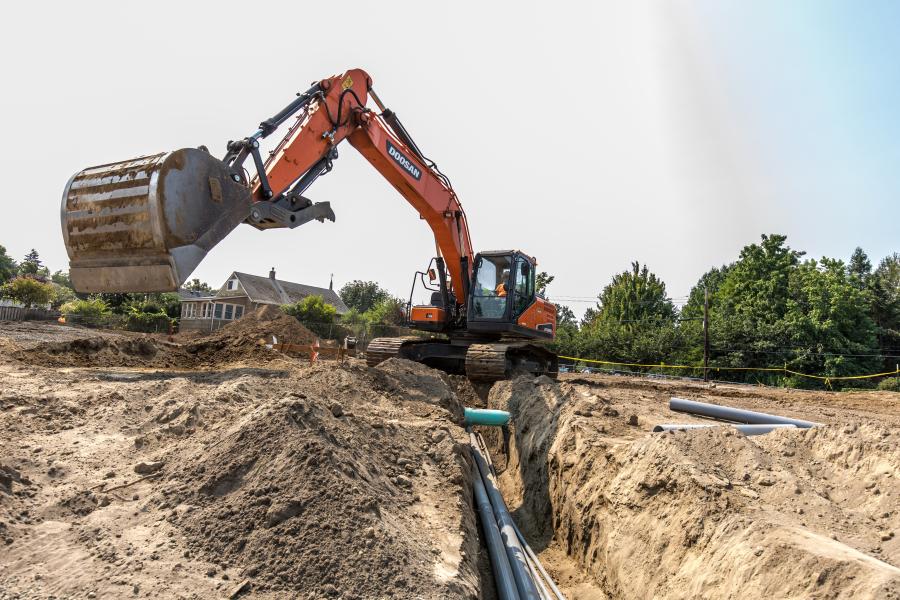 Building a commercial site preparation and excavation company from the ground up means making a commitment to dig deeper, match people to their best fit and sell what sets you apart from the competition. When the husband and wife team of David and Nancy Lauzon started Lauzon Contracting, dividing the duties between themselves and two other employees made staffing and fleet decisions simple. And, it didn't take long to stand out from the crowd.

"The one thing that really sets us apart is we hit schedules every time, always," David said. "Our reputation is we get work done on time so that others can get their work done on time. We actually have some concrete subcontractors that give us discounts if we're the excavation partner." 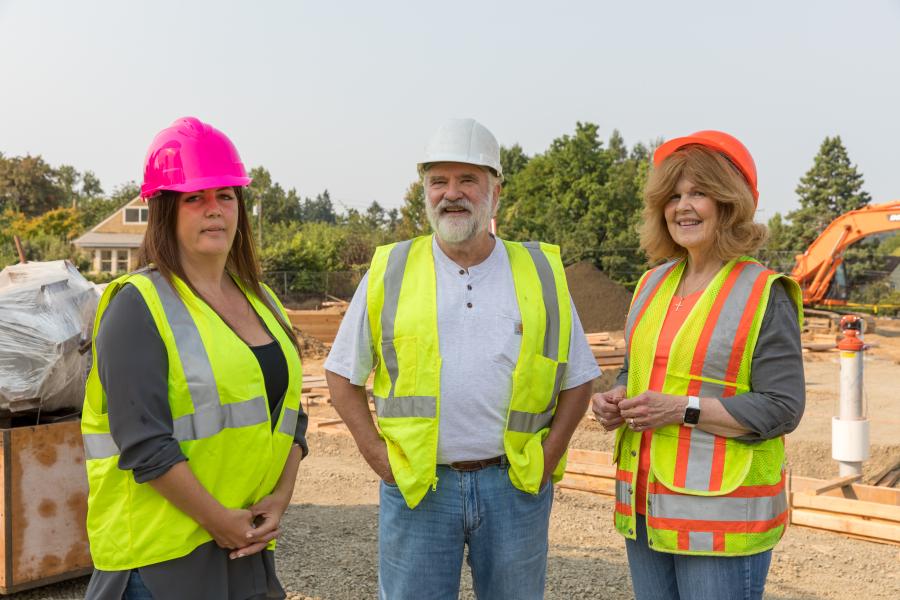 By always being on time — and always on point — Lauzon Contracting has carved out a niche in the Portland, Ore., commercial construction market where the company's employee roster started with family and friends. Growing up on a ranch in South Dakota, David Lauzon was "pulling levers on machines" and working in excavation at an early age. On a long-ago job site, he befriended another excavator operator, Joe Gadotti. The two hit it off, Gadotti joined the company and the two started bidding jobs together. Lauzon now specializes in contract negotiating estimating, and Gadotti is the construction manager.

Nancy was the jack-of-all-trades in the early days.

"If Dave needed someone to flag or shoot grade, I was there. And I also handled the financial end in the office," said Nancy, who is now the managing member and sole owner of the enterprise. David and Nancy's daughter, Tia Olsen, took her parents' advice, earned a degree in accounting and eventually took over the reins as the controller.

A Vision for Turnkey Excavation

The team bought a few pieces of compact equipment and targeted residential projects. David and Gadotti went out in the field, and Nancy and Olsen ran the office.

"At that point in time, it was about getting new clients and getting yourself out there and known," Olsen said. "I believe that's the hardest part about starting a new business."

Over time, the company's reputation began to grow beyond descriptions of punctuality to include versatility. Services expanded, projects grew bigger and the machines became larger. 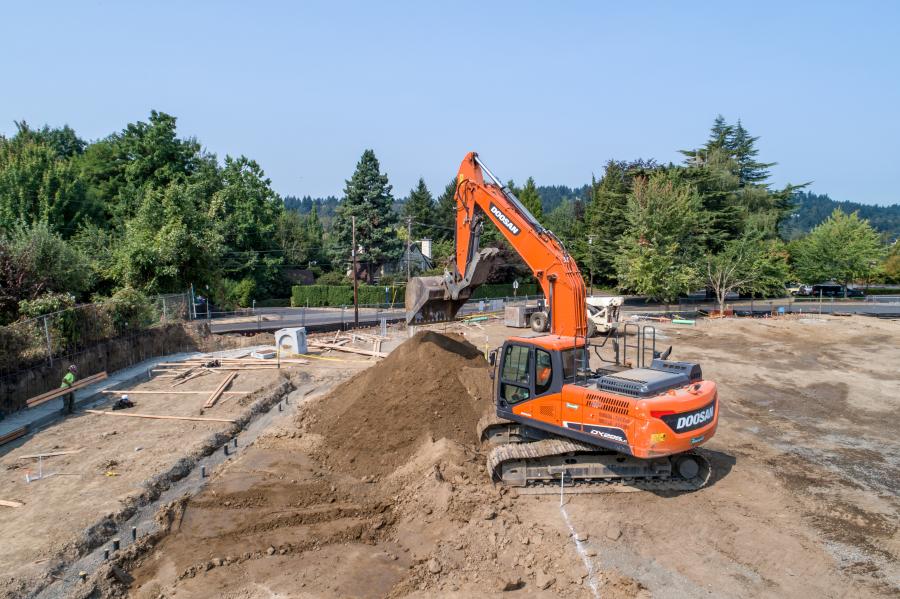 Lauzon Contracting now completes eight to 10 projects annually using a Doosan fleet of seven crawler excavators and one wheel loader. It offers a range of services from budget consultation, to permits, to a commercial job package from start to finish.

"We demo all the buildings; clear and grub; do structural excavation for the buildings; and do the site prep, installation and repair of all utilities and structures," David said.

Despite the growth in services and contracts, Nancy's ownership goals remain grounded and right-sized.

"My inspiration is to provide a better life for my employees and my family," she said. "We work so well together and appreciate each other, and that's what makes our company successful."

The company has thrived as one of the few female-owned construction enterprises in the Pacific Northwest.

"I think that we've gained a lot of valuable relationships and projects being woman-owned, and it's mandatory to use women on a lot of projects now," Olsen said, referring to the state of Oregon's recent formation of specific requirements for a percentage of government contracts to be awarded to certified minority-owned, women-owned, service-disabled veteran-owned businesses and emerging small businesses.

"We were well on our way when that state program came about, but it has helped being woman-owned a lot more than I realized," Nancy said. "Even if it's 10 or 20 percent of the jobs being awarded to minorities, it all helps."

Lauzon Contracting's reputation for performing a full spectrum of services for commercial projects — like low-income housing and retirement communities — also has been built on durable equipment. One thing that hasn't changed since the company purchased its first Doosan machine is how it evaluates purchases with an expectation that equipment be visible and perform for up to a decade.

"It's the durability and the relationship you have with the dealer," Joe said. 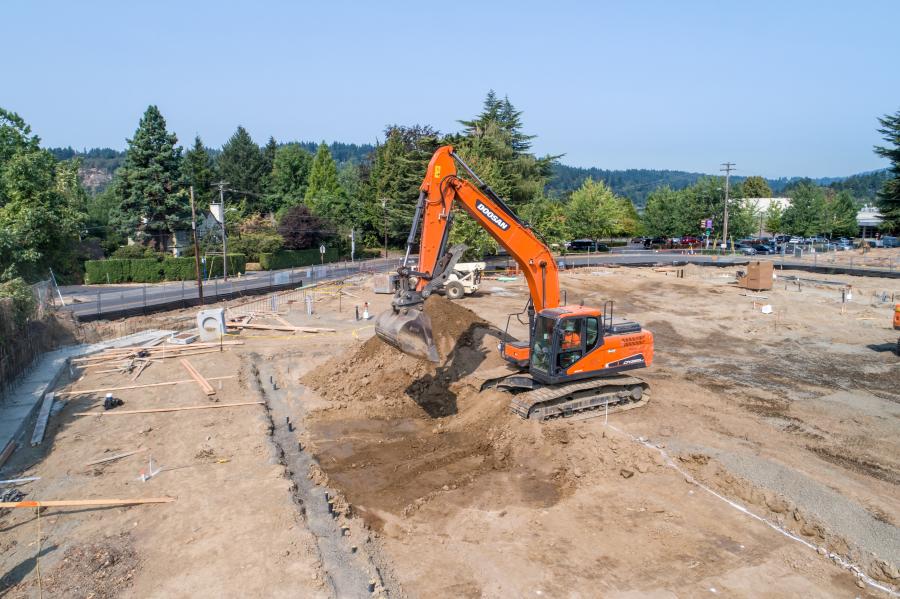 "Our relationship with Feenaughty and Byron is a really key part of this, too, because they worked with us to get the right equipment," David said. "We cycle through our machines, and we're just really happy with Doosan. I like high-visibility machines, myself. That orange stands out pretty good, and we've turned into a pretty orange company."

As a new brand to the company, Doosan had to prove its durability.

"When we bought the first piece of equipment, it was a cost savings, and we were a little bit worried about the durability," David said. "But as you can see, we bought quite a few more — three machines in one year — because we liked the first one so well. Our DX350LC-5 is an awesome machine. It's paid for itself three or four times over."

From Demo to Dirt

The company assigned the DX350LC-5 and two DX225LC-5 excavators to several tasks last summer on a project for Northwest Housing Alternatives, a 501(c)(3) organization that provides housing for low-income residents in the Portland area. The job required Lauzon Contracting to demolish 11 homes and excavate 10,000 cu. yds. of dirt to prepare the sequential site preparation steps. 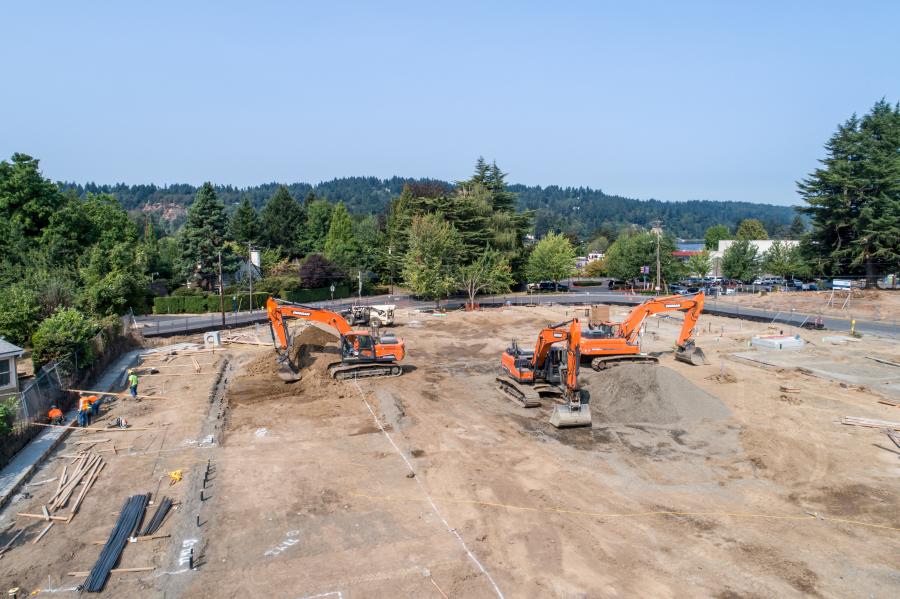 Operators put the Doosan machines to work trenching for a series of complex utility installations that included a stormwater detention system, followed by the structural excavation for below-grade parking garages and a ground-level retail component.

Lauzon Contracting completed its portion of the project on time because punctuality is ingrained in its company culture. And meeting deadlines with the right equipment has become a clear competitive advantage.

The challenges of being located in a booming construction region can be good for finding work but presents labor issues. Operator comfort is a leading factor in recruiting and retaining operators.

"Our big thing right now is trying to find operators. It's really, really a tough job market, and all the guys that we've hired really like these Doosan machines because of comforts like air conditioning, heating and visibility, and there's plenty of power and reach," David said.