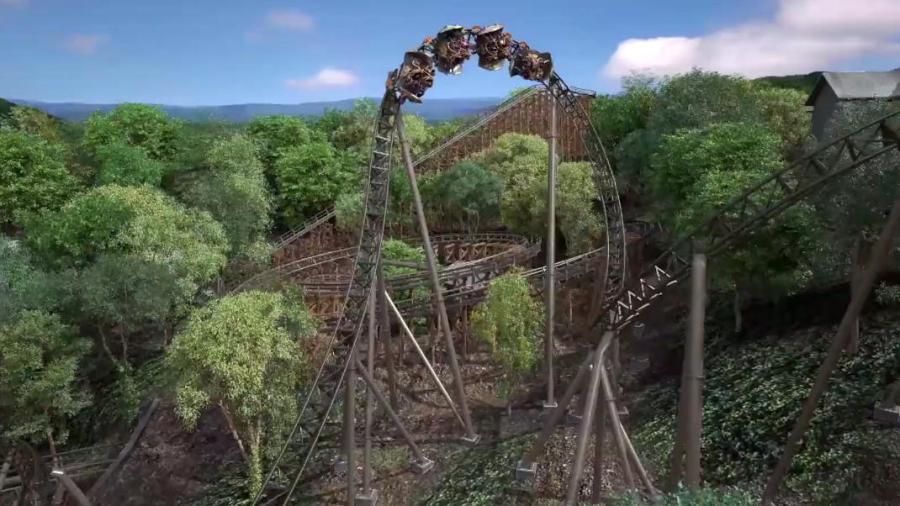 A rendering of the Time Travel coaster.

A new triple-inversion spinning roller coaster themed as a retro-futuristic time machine will put a small Missouri theme park back in the thrill ride spotlight with the world's fastest, steepest and tallest ride of its kind.

The new ride's Jules Verne- and H.G. Wells-inspired back story follows the fictional exploits of 19th century clockmaker Charles Henry as he explores the possibilities of time travel. During a lecture at Silver Dollar City, Henry unveils the results of his experiments: the Time Traveler spinning coaster.

The new coaster, built by Germany's Mack Rides, takes advantage of the park's mountainous Ozark terrain. Time Traveler rolls out of the station into a 100-foot vertical first drop down the face of a hillside at 50 mph. After navigating a dive loop, the 16-seat train enters the first of two magnetic launch zones that rockets riders through a 95-foot-tall vertical loop and a zero-G roll. The second launch propels the train over the remainder of the 3,000-foot-long track as the spinning cars rotate around a vertical axis.

Time Traveler will be similar to Cobra's Curse, a Mack spinning coaster that opened in 2016 at Busch Gardens Tampa in Florida. The Cobra's Curse cars have the ability to face forward, backward or spin randomly based on the weight distribution of the riders.

Now the park's new Time Traveler spinning coaster will turn what has traditionally been a family ride appealing to pre-teens into a thrill ride with three gravity-defying inversions.

Spinning coasters date back to the earliest days of amusement park history. The first spinning coaster was built in 1908 at Luna Park in Coney Island, N.Y., according to Roller Coaster Database. The Virginia Reel coaster featured spinning tubs that traveled along a zigzag track with switchback turns. The spinning coaster craze really took off in the 1990s, with more than 450 of the rides built since then, according to the database.

Only one other spinning coaster has an upside-down inversion: Gekion Live at Tokyo Joyopolis in Japan. The 2012 launched indoor coaster built by Germany's Gerstlauer Amusement Rides features an in-line twist.