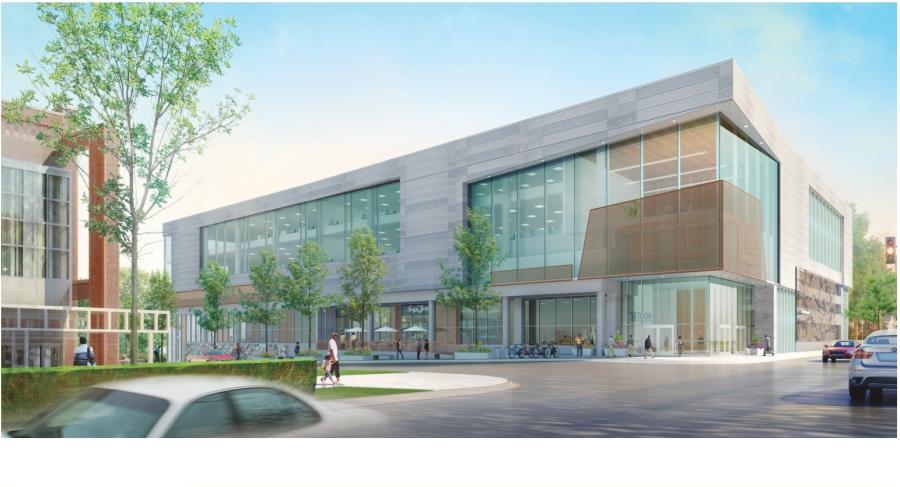 SCOTT ERICKSON ARCHITECTS A rendering of the planned Thor Companies headquarters at Penn and Plymouth avenues N. in Minneapolis.

Richard Copeland, founder and chairman of Thor Cos., the developer-contractor that is Minnesota's largest minority-owned business, was born to a single mom in the former public-housing apartment projects on the near north side of Minneapolis.

His firm developed and built Heritage Park, the housing development that replaced the projects more than a decade ago and where Copeland lives.

And Tuesday, in a deal speculated for a year, Copeland announced that he would move his 250-employee firm from the suburbs back to the old neighborhood as part of a $100 million private-public, several-building project designed to revitalize the half-vacant intersection of Plymouth and Penn Avenues N., once the commercial hub of the near north side and only a couple miles north of downtown.

Copeland and Thor CEO Ravi Norman, joined by Target CEO Brian Cornell, also announced at the groundbreaking for the four-story Thor complex, that Target Corp. has agreed to a be an investor in its $36 million, 92,000-square foot headquarters, office-and-retail complex.

"It's a dream come true to bring our success home to the north side," Copeland said.

"We want to change the [discussion] from reducing disparities to maximizing opportunities," he said of larger community-revitalization and workforce-development plans in the end of town that boasts the lowest incomes and highest unemployment and crime rates.

Copeland, Norman, Cornell, Gov. Mark Dayton and other business and community officials addressed a group of several hundred people, including north-side entrepreneurs in business, law, architecture, the arts and hospitality, at a ceremony in a heated tent on land that has been vacant for 30 years.

Target will be a leaseholder in the new building, essentially an investor in an unspecified amount of space in which it may use some and likely lease more at a preferred rate to north-side enterprises.

Target in 2003 closed a store on W. Broadway a mile away.

"We couldn't be more proud to partner with Thor on this important project," said Cornell. "Through this unique relationship with Thor, we're helping to fuel opportunities in north Minneapolis."

Cornell also is part of the Itasca Group of civic and business leaders who addresses major issues such as workforce development and who lately have been exploring ways to accelerate the growth of the north Minneapolis economy that has lagged the economic development of the rest of the city.

Thor started negotiations last year with Hennepin County to relocate its development, design, construction and consulting business of about 250 employees from Fridley to the north side.

The $36 million Thor project is part of $100 million in construction slated for the four-corner intersection.

Kitty corner from the new Thor headquarters, Northpoint Health and Wellness, the medial-and-social services nonprofit, will expand at a cost of about $65 million.

That project requires moving adjacent Estes Funeral Chapel across Plymouth Avenue. Hennepin County has agreed to build a new chapel for the 54-year-old business as part of its Northpoint project.

The county is expected to reimburse Thor $14 million for ownership of 400 parking stalls for Northpoint in an adjacent 620-stall parking ramp that is being built by Thor for its needs and those of Northpoint.

The intersection of Penn and Plymouth avenues, half-empty today, was once part of a prominent north Minneapolis commercial strip that slid after the race riots of the 1960s. Business owners closed or moved to the fast-growing suburbs. The Thor investment is vital for a neighborhood that has struggled to attract commerce amid years of depressed housing prices, flight of the middle class to the suburbs and headlines dominated by crime.

However, in recent years a slow, building-by-building commercial revival has emerged along nearby Glenwood Avenue and W. Broadway. And housing prices in north Minneapolis, among the most affordable in the Twin Cities area, also are rising rapidly over the last year.

"It's a great thing," said Minneapolis Council Member Blong Yang of the developments underway at Penn and Plymouth. "And there is room for further development."

Copeland started Thor as a small contractor in 1980 that often worked on large projects with M.A. Mortenson, including U.S. Bank Stadium and Target Field. Thor has evolved into a real estate developer, manager and national construction firm with offices in Minneapolis and Las Vegas.

The company had 2015 revenue of more than $160 million. -StarTribune