So far, crews have been unable to get to the damaged cranes to take them down. 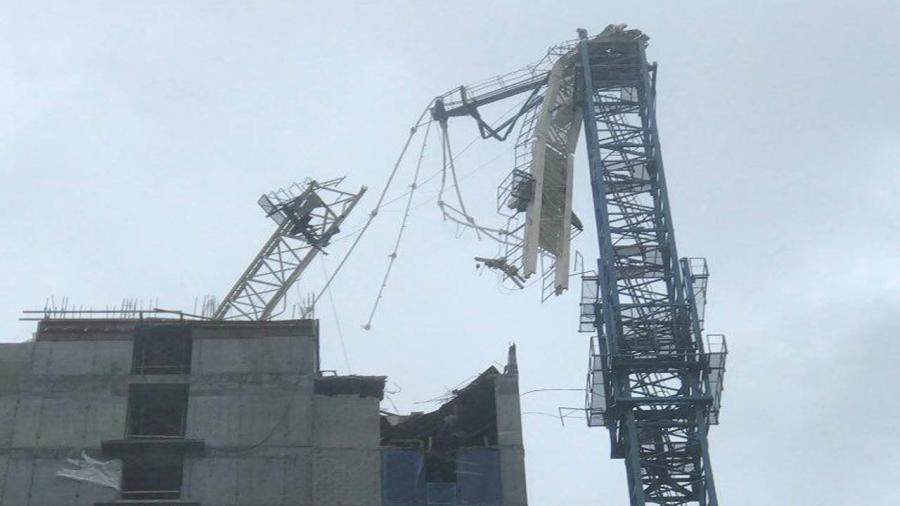 Despite the wind, all of the cranes' arms stayed attached to their towers, rather than falling into the streets below.

The first crane to topple was located at an apartment building in downtown Miami, followed by a second at a condo tower in the city's Edgewater neighborhood. Finally, a third fell at an oceanfront condo in Ft. Lauderdale, the Miami Herald reported. Both the cranes at the Edgewater and Ft. Lauderdale locations were on project sites run by the Related Group.

When the first crane fell, part of the boom ended up hanging partially over the side of an apartment building. City officials told nearby residents to shelter themselves in either their own apartment buildings facing away from the crane, or in a stairwell for safety., the Miami Herald reported.

“Tomorrow we'll assess the damage and try to get the engineering part of it corrected,” said Maurice Pons, Miami's deputy building director. “The general contractor [John Moriarty & Associates of Florida] has been contacted and he is setting up a team of wreckers to secure the tower.”

According to Moriarty, the crane's counterweight fell through the site's interior and damaged the upper plate of the apartment building, the Miami Herald reported.

"Hurricane Irma was an unprecedented and historic catastrophic storm,” Meltzer said. “Every effort to safeguard life in the path of Irma was taken, including the mandatory evacuation ordered by government officials. The crane engineers and crane supplier took measures to secure the crane. The crane's boom was nevertheless damaged due to high winds. Plaza will cooperate with all governmental bodies, as well as the crane supplier and engineers to investigate and establish repair requirements to put the crane back in a state of good repair.”

As for the crane in Ft. Lauderdale, Jeanmarie Ferrara, a spokeswoman for general contractor Moss Construction, said, “A crew will be dispatched to secure the crane as soon as weather conditions improve,” the Miami Herald reported.

According to Ft. Lauderdale Police Division Chief Tim Heiser, downed trees and a slew of dispatch calls made it challenging for officers to reach the site where the crane fell.

Despite the wind, all of the cranes' arms stayed attached to their towers, rather than falling into the streets below.

“It's development in the future versus tropical storms or hurricanes,” Regalado said. “We just cannot gamble on the wind.”

So far, crews have been unable to get to the damaged cranes to take them down.