That Maryland contractor Michael Boyd tried out a specialized piece of equipment — an AUSA site dumper — on one of his site development projects was not a surprise. The owner of Three Point Construction company in Mechanicsville, Md., is prone to try new things. 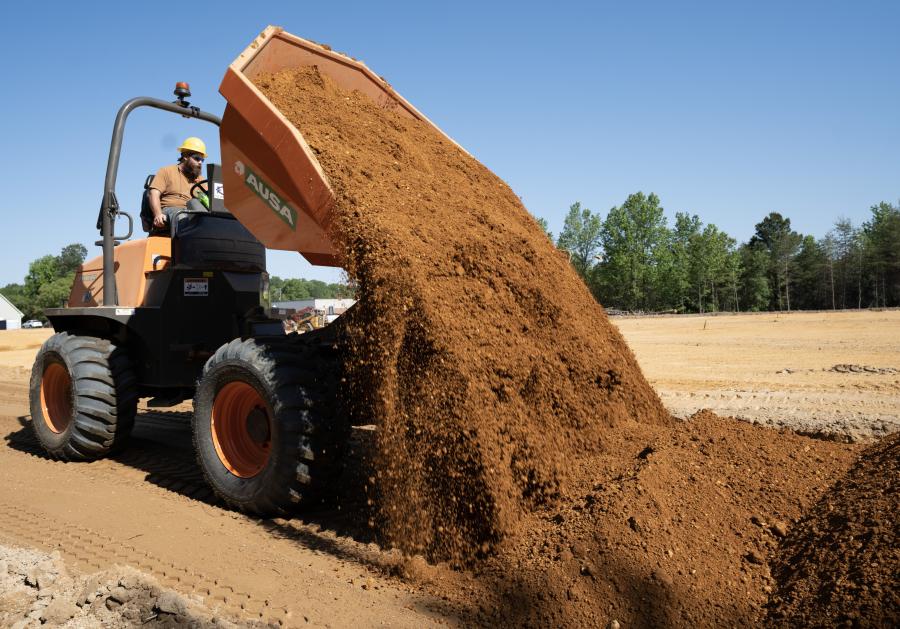 That the performance of the AUSA dumper subsequently impressed the contractor also was no surprise. Such is the reputation of the unique dirt-moving machine manufactured in Spain and reintroduced to the North American market last year.

One reason the piece of hauling equipment is valued is because it's extremely easy to operate, as Boyd will attest. On the first day he utilized it, he had an experienced heavy equipment operator in the driver's seat. Standard operational procedure. The next day, however, Boyd tried something new: He let one of his laborers run the dumper. Result: The inexperienced hand had no issues throughout the course of the workday.

That outcome would have been unlikely had the laborer been entrusted with running a more sophisticated earth-hauling machine such as an articulated truck. For relatively small companies like Three Point, being able to use both experienced operators and capable laborers on a machine is a significant workforce advantage and bottom-line consideration.

In practical terms, it means Boyd can have veteran operators run his dozers, excavators and backhoes with less experienced employees operating dumpers as needed. In dollars-and-cents terms, the company owner gets fuller value from each employee.

Three Point Construction is a 17-year-old firm that Boyd launched after earning an accounting degree from George Mason University and working five years in banking. At that point in his working life, true to his nature, he tried a new thing: construction. With a single-axle dump truck and a few pieces of earthmoving equipment, Boyd began his business by doing whatever a customer needed done — digging basements, clearing land, installing a septic system.

Two years into his new career, Boyd tried another new thing — horizontal auger boring. It quickly became a major part of his business. In 2012, he had an opportunity to bore a new utility tunnel at Johns Hopkins University, a project made more difficult by the presence in the ground of several water, gas and electrical lines. An accurate bore was critical to success.

Boyd responded by searching among competing systems and learning of a front-steer micro-tunneling machine popular in Europe but mostly untried in the United States. Undaunted by the machine's track record on this side of the Atlantic, Boyd opted for the system and successfully completed the bore. 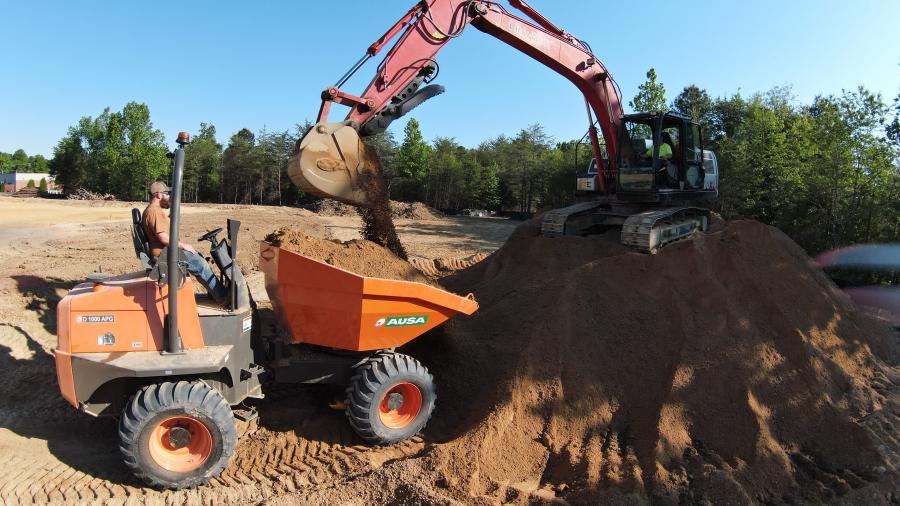 The contractor brings to the excavation and site development segments of his business the same willingness to innovate. This open-minded approach took him to Chesapeake Specialty Equipment, located in Jessup, Md., the AUSA equipment dealer for the District of Columbia, Maryland, Delaware, Virginia and West Virginia.

Boyd's company had won the bid to prepare a 200-ft.-long pad for a new warehouse in Charlotte Hall, Md., southeast of Washington, D.C. The site turned out to have some bad soil, so the contractor had to strip away four feet of topsoil to get to a useable grade. Which is to say more dirt had to be moved than usually was the case.

Because the working area was relatively small, Boyd considered trying out a site dumper to complete the dirt-moving. After contacting Chesapeake Specialty Equipment, dealership manager Will Burgess rented Boyd an AUSA D1000 APG model dumper. The articulating unit has an 11-ton hopper capacity, is powered by a four-cylinder 74-hp Deutz-Kubota engine, which is fully Stage V EPA compliant and can trundle dirt from place to place at about 16 mph.

The D1000 was the obvious choice for Boyd, said Burgess. While the contractor might have opted to use a smaller D600, the numbers made the D1000 the optimum machine.

"The D1000 is only 10 inches wider, but still under eight feet, 15 inches longer and 1,700 pounds heavier than the 600, but you get 65 percent more weight-carrying capacity," Burgess said. "If you're not sensitive to the weight of the machine on the job site, getting the A1000 is a no-brainer."

Boyd's accounting background made short work of determining whether renting the AUSA unit made bottom-line sense. It did.

"I realized I was going to pay about half the price for the AUSA that I would have paid for a competitive machine quoted to me. I could have rented two AUSA dumpers for the price of the rival machine."

In fact, Boyd wanted two of the dumpers. Unfortunately, the growing popularity of the machines coupled with their relatively recent introduction into the North American market has put a premium on dealership inventory. To overcome those numbers, AUSA's U.S. manager is working overtime to bring more AUSA equipment over from Barcelona to dealer lots in this country.

The warehouse site development work at Charlotte Hall flowed like this: Boyd's Link-Belt 160 excavator worked one end of the worksite loading soil from a stockpile into the AUSA dumper. The excavator's 1.25-cu.-yd. bucket filled the dumper in four scoops.

The site dumper was able to transport the dirt to a low area on the site, upend its front-tip skip, dump the dirt and return to the stockpile before the excavator operator finished his between-loads management of the dirt mound. A Caterpillar D3 smoothed the dumped dirt.

"The excavator wasn't waiting idle between loads," Boyd said of the sequence. "I would have used two dumpers if I'd been able to get two. That would have been useful, but one worked well enough for this site." 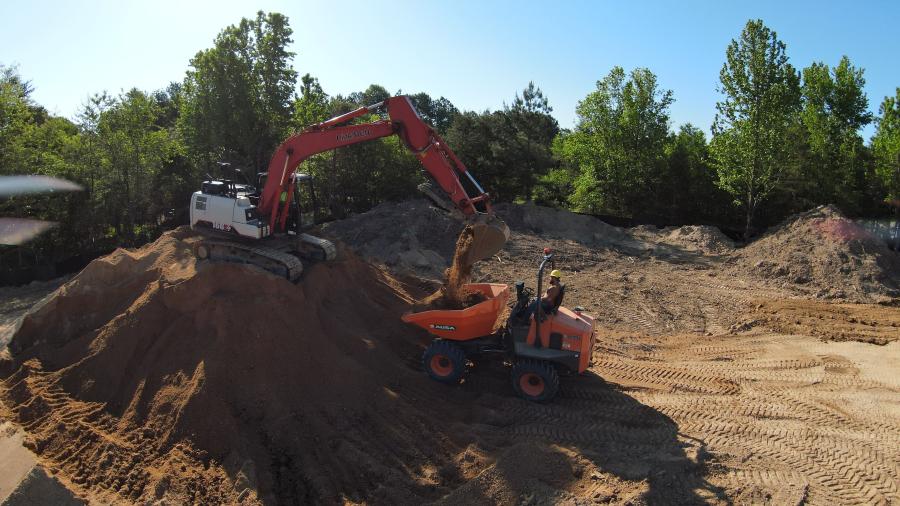 In two weeks of hauling, the dumper moved 4,000 cu. yds. of dirt. Had he not exercised the site dumper option, Boyd would have employed a 25-cu.-yd. articulated truck to move the dirt, which would not have been the best choice, he said.

The experience was a learning one for Boyd — that's what happens when you try new things — and broadened his options for future site development bids. He said he will opt for an articulated truck when circumstances dictate but go with a site dumper when it clearly is to his advantage to do so.

"The AUSA machine worked pretty much as expected," Boyd said, looking back. "The manufacturer has a model with a swivel seat for better visibility when maneuvering in tight spots. It lets the operator turn away from the dust when it's being loaded. I couldn't get that machine this time or I would have."

The dumper didn't have a canopy or cab either, which the contractor would like to have on the specialty machine the next time he rents one. "The men got pretty wasted working in the sun." CEG