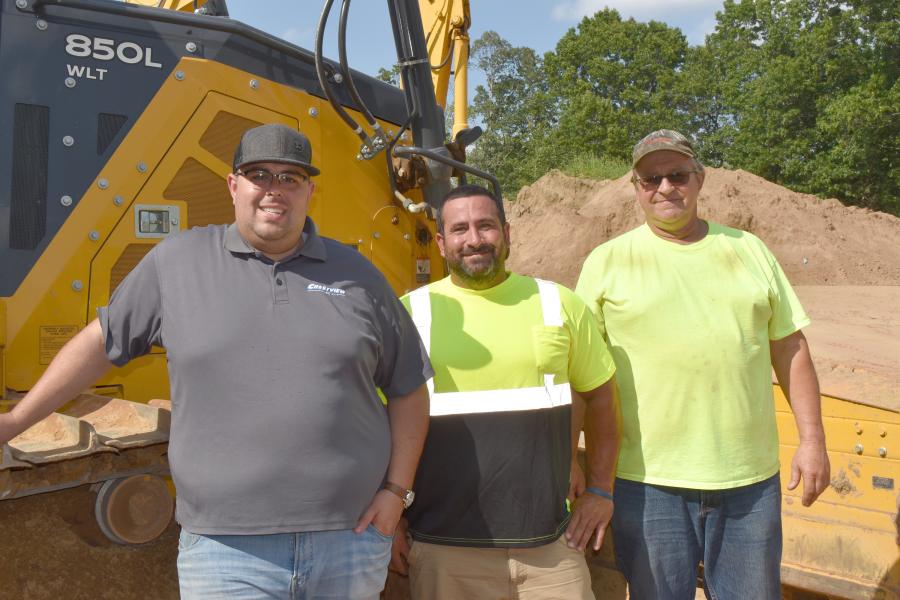 In 1983, neighbors John Dziengelewski, a dairy farmer with a gravel bank on the farm, and Bernie DeLuc, a union truck driver, got together and started a business selling and hauling gravel. The two combined their resources, procured a loan for a dump truck and a loader, and started what would eventually develop into Crestview Inc.

Today, Crestview has three principals, Bernie DeLuc's son, Brian; John Dziengelewski; and Dziengelewski's son, Aaron. The company is known as an excavating contractor that does residential and commercial work, sells sand, gravel and loam, does site development, drainage, utility work, snow removal and about any other job that makes sense for them to tackle. 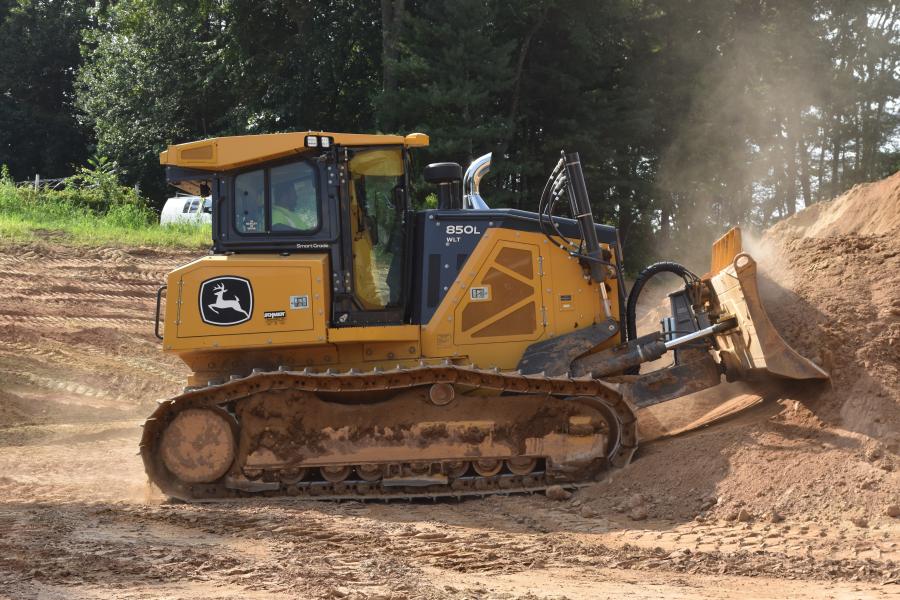 The first expansion/diversification of the company occurred in 1987, when John and Bernie got involved in a subdivision project. This project ultimately led to their first purchases of earthmoving equipment and the company grew into doing larger residential projects, utility work, commercial projects and solar farms. Today, it can handle just about any project that comes its way, according to John Dziengelewski.

"The John Deere 850 was our first purchase from Schmidt Equipment," he added (see Schmidt Equipment Becomes United Construction & Forestry LLC) "It only had a few hundred hours on it. But what really impressed us was that the manager of Schmidt Equipment, which at that time was considered a pretty big John Deere dealership, came out to see us in person, and we were still just a small upstart construction company. The fact that he took the time to visit us, pay attention to our needs and personally follow up made a lasting impression on us, and it started a relationship that has continued on with Schmidt Equipment to this day. Even to the point that when the 2008-2009 economic collapse occurred, the same Schmidt Equipment management was instrumental in helping us manage our assets at a time when there was almost no utilization at all, in a manner that allowed us to survive the worst recession/near depression we had ever seen."

Through the highs and the lows and the dramatic economic swings that has defined the New England economy over the past few decades, Crestview has found that the ability to change directions and diversification is the key to survival. In the 1980s, when the housing market virtually collapsed, the company changed direction and went after the commercial market. Today, it does commercial, utility and residential work.

Four years ago, Crestview started a new division that in a sense took the company back to its aggregate roots: it is back in the aggregate business producing specialized sand for concrete production.

Of course, the loaders that feed the aggregate equipment at those sites are John Deere.

When asked why over the years they have stayed so loyal to John Deere equipment, John Dziengelewski replied, "It started with my background on the farm. We used John Deere agricultural equipment and it had always been a good experience. The equipment was reliable and maintained good value so that carried over when we started buying construction equipment. And we like the way Schmidt Equipment treated us."

"Massachusetts is two different worlds: east of I-495 and west of I-495," Brian DeLuc added.

"Schmidt Equipment has always treated us like we are their most important customer and that goes a long way. But it's not just how they treat us; the machines are reliable and Schmidt's parts and service after the sale is exemplary."

As Crestview continues to plan for future expansion, particularly in areas like site development and utility work, partnering with a company that is on the cutting edge of technology is critical.

"Not long ago, Brian started pushing hard for GPS technology," Aaron Dziengelewski said. "We started to realize that even through the bidding process companies were looking to see that you had that technology and that you were going to get passed over if you could not provide it. We further realized that not only did we have to catch up with GPS technology, but we had to advance with that and all other technologies or we are going to get left behind. 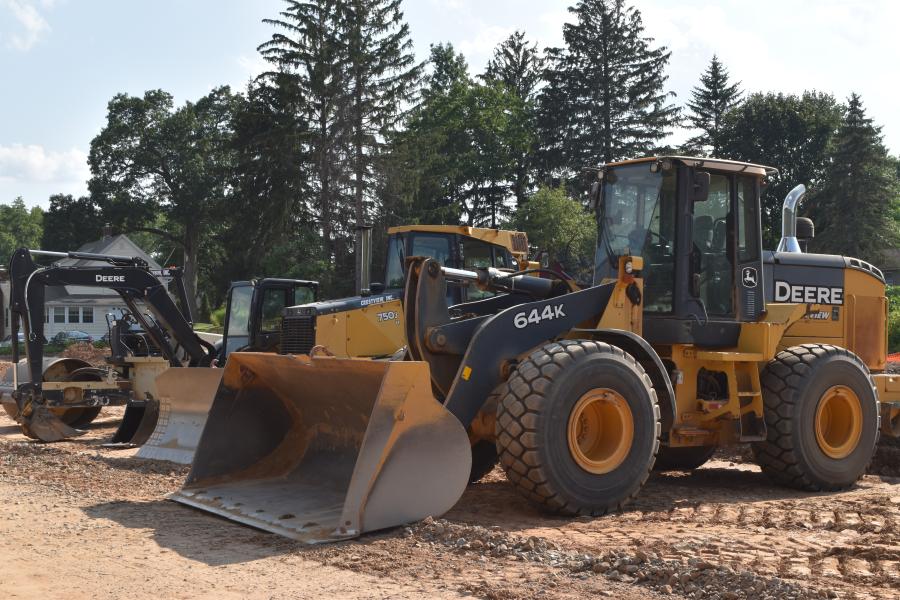 "As jobs continue to get more competitive in pricing, materials and the handling of materials is a huge cost factor. Anytime that you can use GPS technology to home in on those costs it's going to make you more competitive. Furthermore, you're getting a better finished project through the use of the technology and a happier customer."

When Crestview decided it was time to invest in a John Deere 850 size dozer, its history with Schmidt Equipment made the dealer the clear choice.

"Our past experience with Schmidt Equipment told us that they were willing to grow and learn the technology with us," Brian DeLuc said. "John Deere uses Topcon and we were very comfortable with Topcon's reputation and we know that Schmidt has quality people to support Topcon. We had 38 years with John Deere and Schmidt, which gave us more confidence in their organization that we would have with anyone else.

"Our sales rep with Schmidt Equipment, Chris Kokosa, is a part of the equation. He is very hard-working. If he doesn't have the answers for you, he will research it until you're completely satisfied with the answers and your purchase. He has a background with a trucking company, so he understands the need for being responsive and he's always willing to work off hours and meet whenever it is convenient for the customer. He's been a real standup guy and I think he brings a lot to the table for Schmidt Equipment.

"I think a lot of salespeople try to sell you a substitute if they don't have what you're looking for. Chris went out of his way when we were adamant that the only machine that was going to meet our needs was going to be a John Deere 850L. Chris went to work through John Deere, and we were fortunate enough to get them to sell us the machine directly from John Deere's Arizona proving grounds which we feel speaks volumes to his hard work for his customers.

"Why did we want the 850L? Since SmartGrade is integrated into the machines, it removes the need to install blade-mounted sensors and components daily, reducing setup time and allowing operators to get to work. Eliminating external cables to the masts reduces breakage, and the removal of the masts from the blade eliminates vulnerability to damage and theft.

"A key feature of the integrated machine control is Auto SmartGrade. This allows the operator to easily adjust the system when moving the machine from one soil type to another, unlike an after-market system, which often requires the GPS manager to make a trip to the machine to recalibrate the system. Particularly helpful to new operators, Auto SmartGrade automatically lifts the blade over heavy loads before track slippage occurs, then returns the blade to grade. SmartGrade also limits the number of passes required, reducing the pace of wear on the undercarriage."

And how has Crestview been satisfied with the John Deere 850L purchase? Brian DeLuc replied, "By far the best asset our company owns for a machine. It's in the highest demand at all times and I think very soon we will be adding to the SmartGrade fleet so that we continue to be competitive and to make sure we are giving our employees the best possible technology they can run. This was a big purchase for us and it was a tough decision to make, but it has certainly paid off faster and more efficiently than any other machine purchase we have ever made." CEG

(All photographs in this article are Copyright 2021 Construction Equipment Guide. All Rights Reserved.)