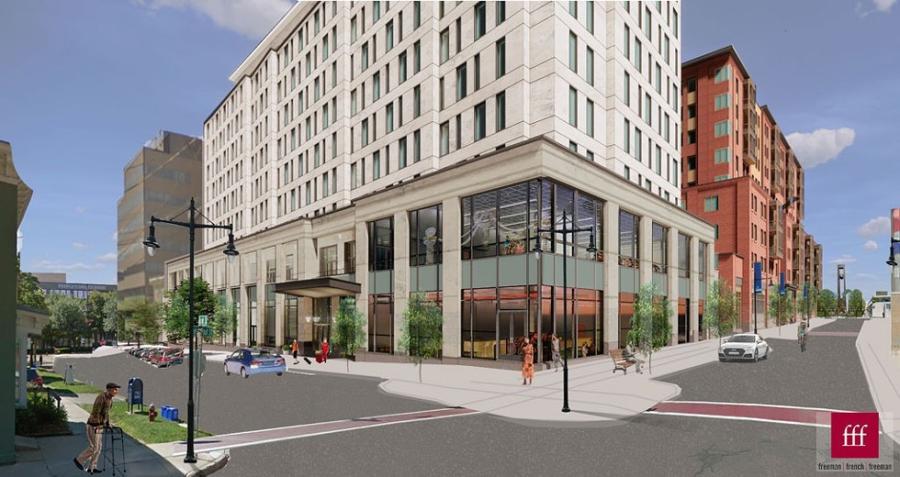 It may not look like much is happening at the three-acre vacant lot in the center of downtown Burlington, Vt. But behind the scenes, a new ownership team is working furiously to start construction on CityPlace Burlington.

When voters approved the ambitious CityPlace project in 2016, it was owned by a company that bailed out of the project in July.

Each of them runs a multigenerational family business that has shaped the built environment of the Burlington area, and each also has developed multiple residential and commercial properties. They're stepping up to save CityPlace, which would bring hundreds of new residents and a much-needed economic boost to downtown Burlington.

The three men had some involvement in CityPlace before they owned it: giving input on plans, working with potential tenants and helping to tear down the mall that was on the site.

Now they're determined to do what it takes to complete the project.

Farrington, Ireland and Senecal have known each other, professionally and personally, for "a long time," said Farrington.

What attracted the trio to this complicated and controversial project?

"We like to be busy," added Senecal. "We go after as much work as possible."

Senecal employs roughly 120 to 200 workers locally, depending on the season, while Ireland's workforce ranges from 320 to 400. Finding enough work to support 400 families is "a lot of responsibility," Ireland said.

To keep its crews busy in the winter, S.D. Ireland started building and managing its own residential properties in 1996. It built and owns both Severance Corners Village Center in Colchester and Bayberry Commons Apartments in Burlington.

Farrington has redeveloped and now manages several commercial office spaces in the city.

In addition to his other businesses, Senecal has also owned and managed commercial office, retail and industrial buildings, as well as apartments and senior housing.

He pointed out that CityPlace is "one of the largest projects" in Vermont.

"It was that kind of challenge that pulled me in, and I'm sure you guys, too," he said on a Zoom call with his partners on Nov. 18.

In the weeks since they took over, the trio of builder have filed their zoning permit application, begun negotiations with the city and made a deal with the school district to relocate Burlington High School to the old Macy's building, which they now own.

Best of Both Worlds

Their new design for the project includes two towers — nine and 10 stories high — that contain 426 units of housing, at least 84 of which will be classified as "affordable," as well as a rooftop restaurant and an observation deck, and community space that will be available and accessible to all.

It will house 45,000 sq. ft. of retail space. Farrington noted that, as the project progresses through permitting, the developers will be reaching out to local restaurateurs and retailers. Though they must price the rents at market rates, he said, they'll be considering the importance of tenants with local connections.

After visiting big cities like Boston and Montreal, Farrington said he's excited to build all that housing in downtown Burlington.

CityPlace will add 600 to 700 new residents to the city center, and he expects that will bring more services, restaurants and entertainment options.

Nestled on the eastern shore of Lake Champlain, Burlington, he said, offers "the best of both worlds," with open land and outdoor recreation options just a short drive away.

"We're going to have a real little city here," he boasted, adding that CityPlace would be a boon for the state's largest municipality, with a population of almost 43,000 people.

After all, Farrington said, "If Burlington does well, everybody does well. It's the engine that drives the Vermont economy."