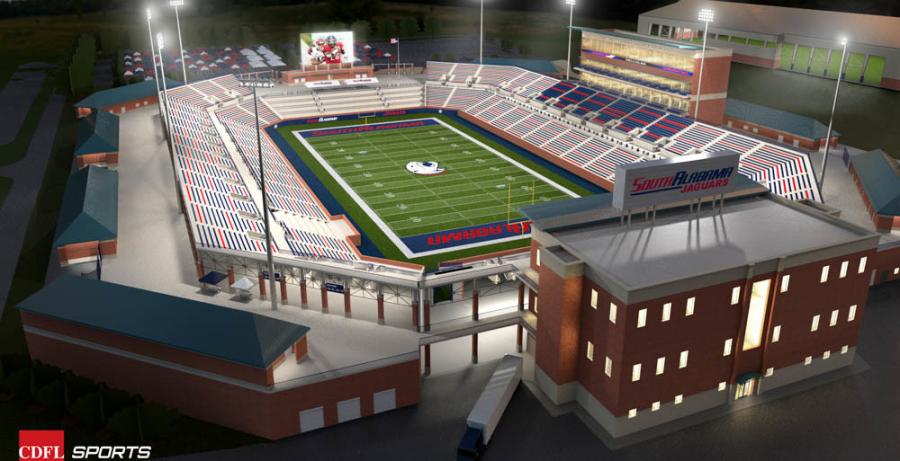 A rendering of the stadium.

MOBILE, Ala. (AP) — University of South Alabama trustees have voted to move forward with construction of a $72 million on-campus football stadium for the 2020 season.

South Alabama has played home games at the city-owned Ladd-Peebles Stadium since it began football, and it asked the city for $10 million to help build a new stadium on the campus. However, the city refused to put that amount of funds into the project a few weeks ago.

"We will not have the ability to award the bid until we go back to the board again," the school's athletic director Joel Erdmann said after the vote.

The new stadium would be built at the current intramural field on campus, near the practice facility under construction.

The school recently announced a fundraising campaign to raise money for the stadium.

Trustees in June approved plans for construction of a 25,000-seat football stadium.

Mayor Sandy Stimpson supported the plan, saying it would save the city money over the long run as opposed to maintaining the municipally owned Ladd-Peebles Stadium.

Some council members questioned what would happen to Ladd-Peebles Stadium, where the Senior Bowl and Dollar General Bowl games are played each year, as well as a slate of high school games. There was also tension over shifting investment from a predominantly African American neighborhood near downtown hotels and restaurants to a more suburban area.

The mayor says in a statement that the city will accumulate $225 million in maintenance for Ladd, which opened in 1948.