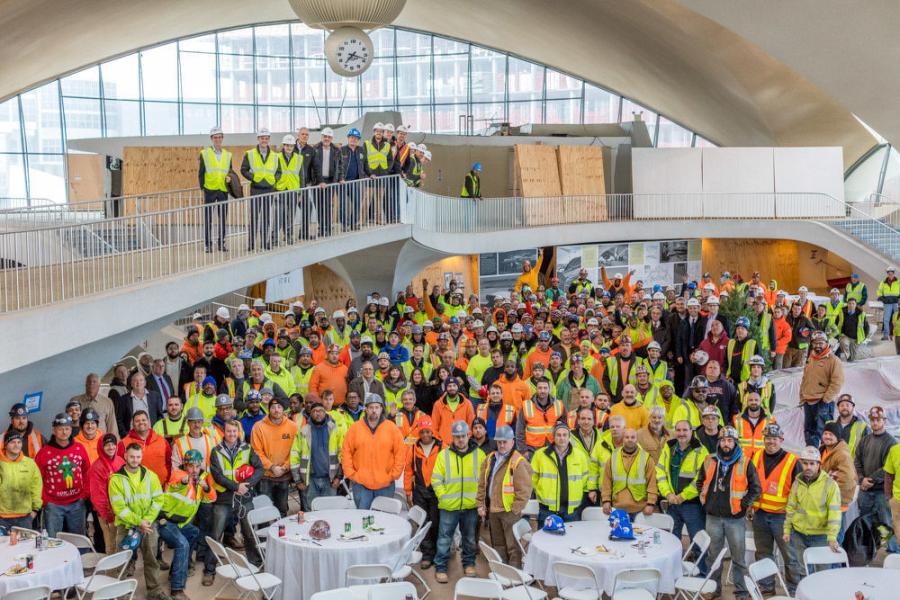 MCR, the seventh-largest hotel owner-operator in the United States, joined hundreds of construction workers at John F. Kennedy International Airport on Dec. 12 to top out the TWA Hotel's first hotel structure. Once complete, the TWA Hotel will preserve Eero Saarinen's iconic TWA Flight Center, adaptively reusing the terminal as a world class hotel with 505 guestrooms, 50,000 sq. ft. of state of the art meeting and event space, and a variety of high quality food, beverage and retail options.

One of the largest construction projects in New York City, the TWA Hotel will create more than 3,700 permanent and construction union jobs, with approximately 300 union construction workers on site daily. The TWA Hotel is slated to open in early 2019.

“Since the TWA Hotel groundbreaking with Governor Cuomo less than one year ago, our team has been hard at work breathing new life into Eero Saarinen's TWA Flight Center terminal and developing one of the most iconic hotels in the world,” said Tyler Morse, CEO of MCR and Morse Development. “This topping out brings us one step closer to reviving this treasured landmark and reopening it to the public for generations to come. Thank you to all our partners in government, labor, and construction for their support over this past year — we look forward to welcoming everyone to the TWA Hotel in 2019.”

Featuring an off-grid cogeneration plant, the two low-rise hotel structures are set back on either side of the terminal, designed to defer to the historic landmark. Saarinen's TWA Flight Center terminal building will serve as the hotel lobby; at 200,000 sq. ft., the lobby is thought to be the largest hotel lobby in the world. Hotel guests and passengers from every terminal will have easy access to the TWA Hotel via the AirTrain as well as through the famous Saarinen passenger tubes that connect directly to JFK's Terminal 5.

The TWA Hotel also will house a Jet Age and mid-century modern museum that will chronicle the mid-century modern design era and the rise of the Jet Age, exhibiting mid-century furniture, TWA uniforms, David Klein destination posters, inflight amenities and other TWA memorabilia — much of which has been donated by the TWA employee community.

In September, MCR debuted the TWA lounge located on the 86th floor of One World Trade Center, designed to preview the ethos of the TWA Hotel. Open to the public by appointment, the Lower Manhattan-based marketing and events space features a replica of Eero Saarinen's legendary sunken lounge, the Italian Solari split-flap board, and a growing collection of TWA and mid-century memorabilia.

MCR's redevelopment of the TWA Flight Center, which involves 22 federal, state, and city agencies, is an entirely privately-funded investment.

“We are delighted to see the TWA Hotel coming to life on our doorstep at Kennedy Airport,” said Robin Hayes, president and chief executive officer, JetBlue. “This is one of the most highly anticipated hospitality developments in memory and we couldn't be more excited to have JetBlue be part of it in partnership with MCR. Congratulations on this exciting milestone.”