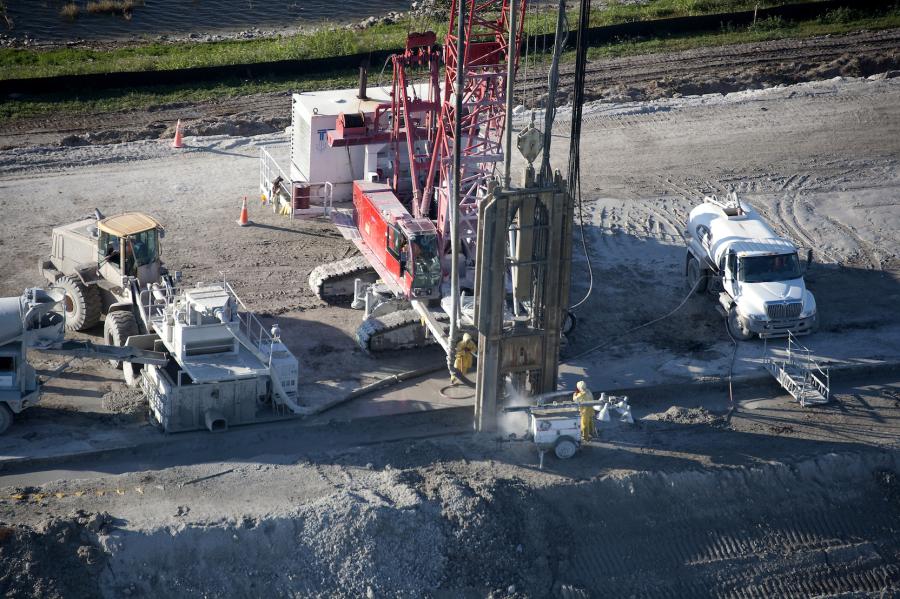 According to Mike Rogalski, the program manager on the project for the Jacksonville District of the USACE, the engineering firm of Hayward Baker Inc., used a trench remixing and design technique that was licensed from a Japanese company.

The gigantic and complex task of rehabilitating the Herbert Hoover Dike around South Florida's Lake Okeechobee may take close to 25 years when it is finished, but the benefits of the work should ensure the safety of area residents for many decades after that.

The huge, 730-sq.-mi. lake, located between West Palm Beach and Fort Myers, is the seventh largest freshwater basin in the United States. Besides serving as the headwaters of the Everglades, the shallow lake, averaging only ft. deep, is also a fish, wildlife and recreation area, as well as a water source for several cities and communities in that part of Florida.

But because the lake is located in a tropical state that often sees heavy rain and powerful storms, high water levels and flooding have been a concern there for more than 100 years.

The impetus for building the dike initially was to protect local residents after a pair of deadly hurricanes in the area killed thousands in the late 1920s.

The U.S. Army Corps of Engineers (USACE) was then tasked with erecting the first of a series of protective barriers around Lake Okeechobee in the 1930s during the administration of President Herbert Hoover.

When completed in 1938, the new Herbert Hoover Dike was composed of gravel, rock, limestone, shell and sand. Work continued off and on over the decades to expand the dike so that now it stretches 143 miles around the lake's perimeter.

However, the dike's advancing age and the threat of more powerful hurricanes, along with telltale signs of water seepage through the old earthen dam, emboldened the federal government to begin another round of expensive rehab work in 2001.

From then until now, more than $850 million has been invested in the work by the Corps of Engineers. Another eight years of construction is projected on the dike with a projected cost of an additional $800 million.

Just last year, a dam safety modification report was approved by the USACE that identified the type of work that is still needed to shore up the Herbert Hoover Dike.

As a result of that report, 2017 will see the USACE award a number of contracts for the construction and replacement of additional cutoff walls and culverts along the dike — work that has successfully been done by various contractors at other locations on the lake for years.

“Overall, we are doing the removal and replacement of the 32 federal culverts within the Herbert Hoover Dike and the three tributaries that feed into it,” said Mike Rogalski, the program manager on the project for the Jacksonville District of the USACE. “We now have 19 of those under construction and by the end of this fiscal year in September we will have awarded another contract that has two additional culverts in it. We also will be going out with contracts for 6.6 miles of cutoff walls along the southern part of the lake between the cities of Belle Glade to just west of Lake Harbor. Those are our two big contract jobs this year, on top of all the other existing work we have going on.”

He added that the majority of the work this year will focus on the culverts before they get back into the cutoff wall work in several months. Within the next two years, Rogalski said more extensive cutoff walls will be built in the vicinity of the city of Clewiston.

That is on the heels of the installation of 21.4 miles of cutoff wall between the communities of Belle Glade and Port Mayaca on the southeast side of the lake.

According to Rogalski, a cutoff wall, or seepage barrier, is made entirely of concrete but with no reinforcement within. It also doesn't provide structural support, but at up to 36 inches in width it does have a great deal of permeability and compressive strength.

More specifically known as a “partial penetrated cutoff wall”, it is designed not to completely inhibit water seepage but to drive it deeper into the dike's foundation, thus dissipating the energy of the flow of water so there is less of a chance of any piping in the future.

When bids are let to prospective contractors, USACE engineers present them with performance specifications for each section of cutoff wall, Rogalski said.

“Our contractors will then come back with proposals on the methods that they are going to use to achieve the specifications we have given them,” he explained. “We tell them the depth and the width of the wall and how they achieve it is up to them. Of course, we go through reviews and proposals to make sure the contractors have the capability to do the work before a series of tests are conducted by both the contractor and the corps to make sure that the desired compressive strength and permeability within the wall is met.”

Several different methods have been used so far to install new sections of cutoff wall along the dike, each employing highly-specialized equipment.

For instance, according to Rogalski, the engineering firm of Hayward Baker Inc. used a trench remixing and design technique that was licensed from a Japanese company.

“Simply, that is like a vertical chainsaw that goes down into the existing perimeter of the dike at the crest,” he said. “It took the existing material that is in the dike itself, pumped and mixed in concrete from a MAT plant that is on site and allowed the concrete to reach its 28-day strength. We then go back in and do core board samples to make sure that the wall meets permeability, while also checking to see that it meets its compressive strength requirements.”

Another contractor, Treviicos South, excavated through its portion of the dike's embankment with mechanical and hydraulic clamshells, and in the limestone rock and sand with a Hydromill cutter to a depth up to 80 ft. from the top of the dam. Still another prime contractor, Bauer Foundation Corp., utilized a cutter soil mixer or CSM, Rogalski said.

Not a Typical Culvert

The other major part of the rehab work on the dike is the upgrade of 32 culverts that control the water flow in and out of the lake. They are found all around the dike, including where the Kissimmee River, Indian Prairie Canal and Harney Pond Canal each feed into the lake.

Tim Willetsen, the project manager of the USACE and, with Rogalski, part of a team of engineers and hydrologists on site for the government agency, was careful to note that although these structures are referred to as culverts, they are very different from typical road and highway culverts.

“These are truly water-control structures and they are pretty massive,” he explained. “As they actually penetrate through a dam they must meet very strict design criteria.”

He said that crews have thus far completely replaced four culverts, totally removed another and are working on 11 contracts that will replace 19 more of the structures.

“Between now and the end of the culvert effort for the dike rehabilitation, we will award construction contracts for the replacement of five additional culverts, as well as taking another three completely out of service,” Willetsen said.

Currently, the USACE projects the dike project to be finished in 2025. Besides the culvert and cutoff wall construction, Willetsen said crews also will work on state road bridge armoring to the west of the lake, as well as some flood control structures tie-ins.

Scores of people are currently working on the various crews at the lakeshore, for several different prime contractors and their subs. All types of standard civil construction machinery is being utilized in the rehab effort, including earthmovers, cranes, pile drivers, rollers, backhoes, dump trucks, concrete trucks and equipment for use in form work and rebar installation, Willetsen added.

Risk Reduction Is the Goal

The rehabilitation of the Herbert Hoover Dike is not at all cosmetic, but a serious response to what could one day be a catastrophic situation if not addressed properly.

“The main thing driving this work is reducing risk,” Rogalski said simply. “Everything about the corps' dam safety program is to bring these dams within what we call 'tolerable risk' guidelines, which is a core set of standards for how we assess our dams and structures to make sure that public safety and property around those structures is protected.”

The desperate need for a protective barrier around the lake became all too clear to the federal government 90 years ago.

In 1926 and again in 1928, destructive hurricanes combined to kill almost 3,000 people living along the lake when storm surge forced water over the 7-ft. mud dike encircling the basin.

The Corps of Engineers came in and designed a new earthen dike with a number of channels, gates and levees to alleviate flooding. That worked well for several decades, but old age and the South Florida climate slowly diminished the dike's integrity by the end of the 20th century.

Today, the USACE is applying modern, proven engineering techniques that it did not have at its disposal when it first built the dike in the 1930s.

“By today's building standards, the original dike work was not done using the best construction methods,” said John H. Campbell, public affairs specialist for the Jacksonville District, USACE. “Back then, they dredged the material and just dumped it; they didn't compact it. Therefore, now it's very susceptible to seepage. In a post-Hurricane Katrina environment, our agency clearly lost several flood control structures. We have really looked hard at shoring these things up and this lake is right at the top of the list in terms of structures that need to be fixed.”

Campbell and Rogalski each cautioned that there is nothing imminently wrong with the dike today that would cause a failure because their agency aggressively manages the water level in the lake to keep it from getting too high. But the Corps, along with the residents and local municipal governments, are justifiably concerned with the long-term integrity of the dike system.

“Simply put, without this rehabilitation, it would fail at some point,” Campbell added.