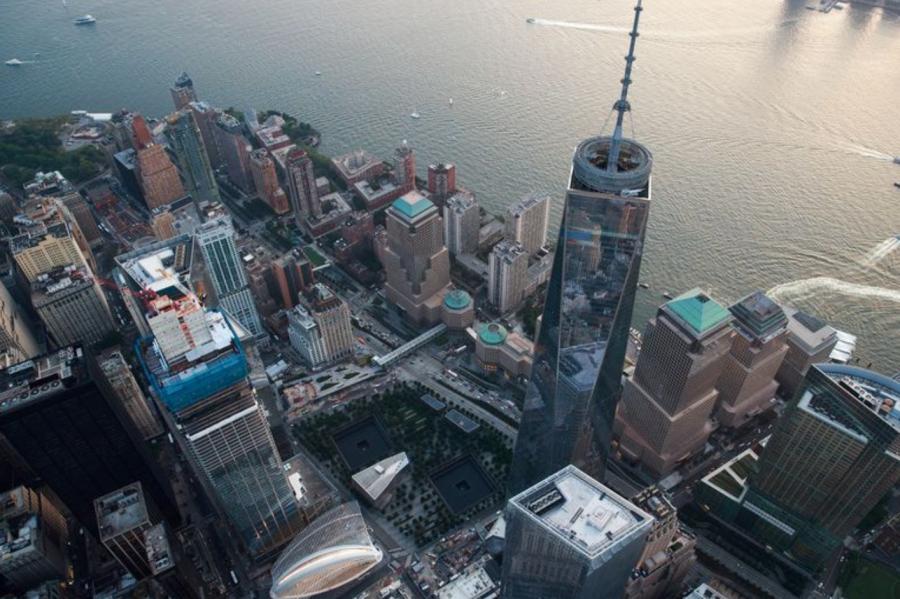 New Yorkers have witnessed construction of the gleaming Freedom Tower — renamed One World Trade Center — on the site that was Ground Zero. (Getty Images photo)

Although most of lower Manhattan's damaged areas have been rebuilt since the 9/11 terrorist attacks destroyed the World Trade Center, 20 years later there are still projects that await completion.

New Yorkers have witnessed construction of the gleaming Freedom Tower — renamed One World Trade Center — on the site that was Ground Zero. A memorial to those who lost their lives on Sept. 11, 2001, also rests on the ground that once supported the twin towers. And New Yorkers are still waiting for the finish of the Oculus, a $4 billion train station and mall that sits just steps from the memorial.

Outside of New York, many Americans may not know that two other structures remain to be built near Ground Zero — World Trade Center Two and a residential building planned for the site where the Deutsche Bank building once stood — and it is still unclear when those projects will be done, according to the New York Daily News.

Area Being Rebuilt as Mixed-Use Neighborhood

The process that began after 9/11 to rebuild the neighborhood has been a long and tortured slog at times. In the effort's preliminary stages, plans included converting the entire Ground Zero site into a park and building two new replicas of the twin towers.

However, Carl Weisbrod, an urban planning expert and board member for the Lower Manhattan Development Corporation, one of the entities central to its redevelopment, told the newspaper that the transformation that eventually took place in the neighborhood took longer because of efforts years before the attacks to address the lack of economic diversity in that part of downtown.

After the 1987 stock market crash, planners and business leaders in New York City recognized that the neighborhood's heavy reliance on the financial industry made it all too vulnerable to the whims of the market.

The Daily News reported that, at the time, the vacancy rate of buildings in the area hovered around 25 percent. To remedy that, officials decided to diversify it economically by converting buildings to more residential and business uses.

The aftermath of 9/11 accelerated the process.

"While nothing is worth the loss of 3,000 lives and the tragedy that not only happened that day and the continued sickness and health and medical problems and loss of life of people that were around there that day, lower Manhattan itself as a place, I think, has done extremely well over the last 20 years," Weisbrod said in speaking to the newspaper. "The strategy of creating a mixed-use neighborhood has taken hold. It is one of the most diverse — in terms of uses and mix of residents and businesses — neighborhoods in the city. It has a diversity in its commercial sector that would have been hard to imagine pre-2001."

As new buildings were constructed, new tenants arrived, including tech, advertising and media companies. The reconstruction also allowed developers to correct what Weisbrod described as a key "planning mistake" that occurred when the twin towers were built in the early 1970s.

"Even though the twin towers were iconic for New York City, for lower Manhattan the superblock that the World Trade Center occupied was really a planning mistake because it separated and kept lower Manhattan from being knit together, with Battery Park City sort of isolated [and] with the financial district separated from Tribeca," he explained.

The focal point of what the city got in the wake of 9/11 is the memorial — the two imprints of the twin towers that are lined with waterfalls and the names of the dead from that day — and what was initially known as the Freedom Tower, the 1,776-ft.-tall skyscraper that replaced the towers as New York's tallest building.

New Projects Will Be Expensive

Finishing the jobs at Ground Zero was, not surprisingly, full of logistical complications.

Building One World Trade Center, for instance, spawned a dispute between developer Larry Silverstein and insurance companies over policies on the location that held up construction and took years to litigate. Silverstein, who also is developing the two remaining World Trade Center properties, received more than $4 billion for the destruction of the twin towers.

The battle, he said, was worth it.

"It became obvious to me that we had to rebuild, and rebuild as quickly as possible, because people were moving out of lower Manhattan at an incredible rate," he said in comments to the Daily News. "If we were going to rebuild this thing, we had to get going."

To date, the total bill for redeveloping the wound left downtown on 9/11 exceeds $20 billion, according to Silverstein, who added that the final total is likely to come in at around $30 billion once the two remaining projects are complete.

World Trade Center Two, which he predicted would "top everything" at the site, has remained stalled, the Daily News reported, in part because the COVID-19 pandemic has made it more difficult to secure an anchor tenant or tenants. The 3.-million-sq.-ft. office building is expected to operate with a zero-carbon footprint and will utilize artificial intelligence, according to Silverstein.

The developer has teamed up with Brookfield Property Partners to build a 1,300-unit, 900-ft.-tall apartment building at the former Deutsche Bank site, which will become known as 5 World Trade Center when it is finally completed. Silverstein expects that to occur in about five years.

Currently, 28 percent of people who live in lower Manhattan also work in the area, noted Silverstein, who predicted that the number would increase once units are rented. Three hundred apartments in his development are slated as affordable housing.

The Deutsche Bank building was closed following the Sept. 11 attacks due to contamination that spread from the collapse of the South Tower of the World Trade Center. That led to its being demolished between 2007 and 2011.